Katherine Johnson at the opening of the NASA Computational Research Facility named after her, in 2017

The most famous among the NASA women scientists of African-American origin, who gained

She was born in White Sulphur Springs in West Virginia in 1918 and studied French and mathematics (after skipping several classes at school). First she worked as a teacher, then she spent some time at home to focus on her three daughters and, in 1953, began working at the NACA’s West Area Computing Unit, where Mary Jackson and Dorothy Vaughan were also employed. For several years she was primarily analysing flight data.

In 1957, the “Sputnik” shock changed the American space flight research – and Johnson’s life. The USA were intensifying efforts to catch up with the Soviets in space travel, creating opportunities for talented minds. Johnson, a black woman, had a doubly hard time, but she persevered, kept asking questions and impressed with her mathematical skills. At the time, she was the only woman to make the move from the computer centre to another department. 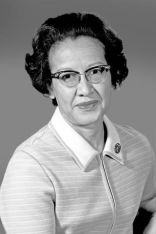 In 1958, the NACA became NASA. She and her colleague Ted Skopinski coauthored the research report “ Determination of Azimuth Angle at Burnout for Placing a Satellite over a Selected Earth Position (1.3 MB)“ laying out the equations describing an orbital spaceflight and specifying the calculation of the landing position of the spacecraft. It was her first scientific publication and the first time a woman in that division had officially received credit as co-author of a research publication.

The paper served as a theoretical basis for manned space flight. Katherine’s calculations made possible the success of Alan Shepard who was piloting the Mercury-Redstone 3 as part of the Mission Freedom 7 mission and was the first US astronaut of America’s first human space flight and the second manned space flight in the history of space travel, in 1961. 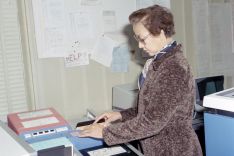 One year later, the astronaut John Glenn asked her to check the orbit of his planned space flight (mission “Mercury Atlas 6”). “Get the girl,” Glenn is supposed to have said. Although the flight data were calculated by computers then, Glenn trusted Johnson more and asked her to double-check the data manually. Later, Johnson remembers Glenn saying: “If she says they’re good, then I’m ready to go.”

Thus Johnson was also involved in the first Earth orbit of an American astronaut. John Glenn’s successful mission marked a turning point in the space race between the United States and the Soviet Union.

Towards the end of the 1960s, Johnson calculated the orbit for the Apollo 11 space mission, thus making a decisive contribution to the success of the first moon landing.

All kinds of honours 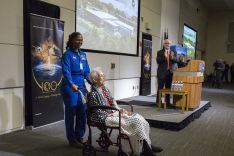 During the failed Apollo 13 mission, which had to return to Earth unplanned after the explosion of a fuel tank, Katherine Johnson helped calculate the return flight. Until her retirement in 1986, Johnson was also instrumental in the Sky Lab and Space Shuttle programmes.

In 2015, Katherine Johnson received the Presidential Medal of Freedom, the highest civilian award in the United States, for her contribution to the moon landing and her lifetime achievement for NASA.

Katherine Johnson Computational Research Facility" in Langley after her. In February 2019, NASA also dedicated a facility in her honour, the „

Like Margaret Hamilton, Nancy Grace Roman and the women astronauts, Sally Ride and Mae Jemison, a character of the Lego special series “Women of NASA” was dedicated to Johnson in 2017. But she allegedly disagreed with how she was portrayed, so her toy figure was never sold. On the other hand, she apparently had no problem serving as a model for a

Barbie-Puppe of the “Inspiring Women” series.