Margaret Hamilton and the software listings of the Apollo 11 mission, 1969

Perhaps the most famous of the women behind the Apollo missions is Margaret Hamilton (born 1936). The young mathematician was working at the Massachusetts Institute of Technology (MIT) near Boston when she joined the space program rather by chance. Hamilton, who had practically taught herself how to program, quickly rose to the post of Director of the Apollo flight computer programming. She was responsible for developing the on-board flight software used for flight navigation and landing on the moon.

Computer technology was still in its infancy: only 72 kilobytes of memory were available to the astronauts on board. By comparison, today, a 64 gigabyte smartphone holds over a million times more memory! Programmers had to use paper punch cards to feed information into room-sized computers without a screen surface.

For the Apollo mission, a different form to store memory was used: Hamilton’s program was threaded on ropes. In Waltham near Boston, many seamstresses were working to convert the software, by hand, into hardware. Tiny iron rings were strung onto a copper wire like pearls on a thread. The zeros and ones of the program were “translated”, so to speak, according to the principle of punch cards. These extremely robust storage media weighing several kilos were called ropes; Hamilton was the “rope mother”. 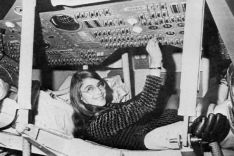 Hamilton coined the term “software engineering” and developed concepts for asynchronous software and priority-driven task execution, which form the basis of modern, highly reliable software architecture. She did not rely on a digital all-round control system, but on a balanced interaction of hardware, software and humans: The pilots were able to interrupt the automatic system and take control at any time. This revolutionary concept was called “man-in-the-loop”.

Today, a photograph of the young programmer taken in 1969 is almost iconic; it shows her standing next to the stack of software listings of the “Apollo Guidance Computer”, which is almost towering over her.

Later it became known that the landing of the lunar module “Eagle” of Apollo 11 had almost been aborted in the last second, because the on-board computer reported an error. However, the error was not in the software, which only reported that the unplanned activation of an additional radar device would limit its computing power. Thus having been warned of an overload, the program ignored the additional data and concentrated on the core task, i.e. the landing manoeuvre. Houston instructed his astronauts to ignore the “1202” error alarm and proceed with the landing. 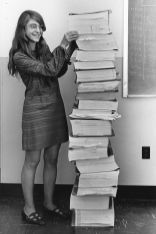 Hamilton being a working mother, occasionally, at night and on weekends, took her little daughter to work to the Instrumentation Laboratory at the

Massachusetts Institute of Technology (MIT). One day her daughter decided to “play astronaut” and pressed a button that crashed the system. Hamilton immediately realised that this could also happen to an astronaut. She recommended appropriate precautions, but was told that “astronauts are trained not to make mistakes.” In fact, during the Apollo 8 mission in lunar orbit, astronaut Jim Lovell made exactly the same mistake as the little girl. Fortunately, Hamilton’s team was able to fix the problem within a few hours.

After the Apollo program, Margaret Hamilton founded successful software companies. In 1986, she received the Augusta Ada Lovelace Award by the Association of Women in Computing and, in 2003, the Exceptional Space Act Award, the largest amount ever awarded by NASA. In 2016, she received the Presidential Medal of Freedom from President Barack Obama, the highest civilian honour in the United States.