Nobel Prizes for 2018 will be presented at a ceremony in Stockholm. What is particularly remarkable about this year's award ceremony is that two women will be honoured in the natural sciences at the same time: Donna Strickland in physics, Frances Arnold in chemistry. This is an absolute rarity in the Academy's award policy.

Donna Strickland is actually only the third woman ever to receive the Nobel Prize in Physics - out of a total of 210 prizewinners. Before her, only Marie Curie (1903) and Maria Goeppert-Mayer (1963) had this honour...

Frances H. Arnold is only the fifth woman to receive an award in the history of Nobel Prizes in Chemistry among 181 prizewinners. The other winners: Marie Curie (1911), her daughter Irène Joliot-Curie (1935), Dorothy Crowfoot Hodgkin (1964) and Ada Yonath (2009). 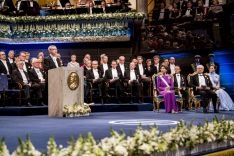 Of course, this is not solely due to the academy, since women are still strongly underrepresented in scientific research. But there have also been cases in which certain candidates such as Lise Meitner seem to have been systematically denied the prize. It is also noticeable that women are disproportionately underrepresented in the other categories: There were and are enough famous female writers, but of the 114 Nobel Prize winners in literature, only 14 were women.

In the long history of the Nobel Prizes, 12 women have received the Prize for Medicine (out of a total of 216 prizewinners), and 17 out of 133 Peace Prize winners were women. Among the 81 Nobel Prize winners for Economic Sciences, there is exactly one woman (Elinor Ostrom, 2009). 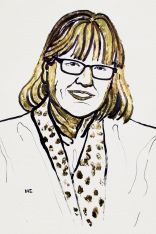 Donna Strickland (born 1959) receives the Nobel Prize for Physics together with Arthur Ashkin (at 96 years of age the oldest laureate ever and holder of numerous patents, e.g.

DE3852365T2) and her former doctoral supervisor Gérard Mourou. They get the award "for groundbreaking inventions in the field of laser physics," according to the Academy. Half of the prize goes to Ashkin "for the optical tweezers and their application to biological systems". The other half is shared by Strickland and Mourou "for their method of generating high-intensity, ultra-short optical pulses”.

According to the Academy, the three have revolutionized laser physics: “Extremely small objects and incredibly rapid processes are now being seen in a new light. Advanced precision instruments are opening up unexplored areas of research and a multitude of industrial and medical applications.”

Strickland and Mourou succeeded in 1985 at the University of Rochester in generating ultra-short and intense laser pulses: the laser pulses were first stretched to reduce their peak power, then amplified and finally compressed; the intensity of the pulse increased dramatically.

Strickland's and Mourous's revolutionary new technology, Chirped Pulse Amplification (CPA), became the standard for high-power lasers used in millions of eye surgeries each year, for example, or in the manufacture of small glass parts for mobile phones.
Strickland studied at McMaster University, worked in Princeton, among other places, and is now a professor at the University of Waterloo in Canada. 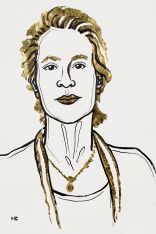 Frances Arnold, born in 1956, is considered a pioneer of "directed evolution" in chemistry. According to the Academy, the Nobel Laureates in Chemistry 2018 "have taken control of evolution and used it for purposes that will benefit humanity most": they use enzymes produced by directed evolution to produce everything from biofuels to pharmaceuticals.

Arnold, who receives half of this year's prize, carried out the first "directed evolution" of enzymes in 1993, i.e. proteins that catalyse chemical reactions. Since then, she has further developed the methods. Enzyme applications include the more environmentally friendly production of chemical substances (e.g. pharmaceuticals) and renewable fuels for more environmentally friendly transport.
Frances Arnold studied at Princeton and Berkeley. She is a professor at the California Institute for Technology (Caltech), heads a research group named after her, and has a proud list of awards and honors. Arnold is (co-)named as an inventor in numerous patents, most recently

The other half of the Nobel Prize is shared by George P. Smith and Sir Gregory P. Winter. In 1985 Smith developed an elegant method called Phage Display, in which a bacteriophage - a virus that infects bacteria - can be used to develop new proteins (patented under

US20090203625A1 (1,61 MB) , among others). Winter used Phage Display for the targeted development of antibodies with the aim of producing new drugs (Winter is involved in many patents; his most recent applications include

US9657288B2 (4,44 MB)). The first drug based on this method, Adalimumab, was approved in 2002 and is used in rheumatoid arthritis, psoriasis and inflammatory bowel disease. Today, Phage Display produces antibodies that neutralize toxins, counteract autoimmune diseases and even cure cancer. 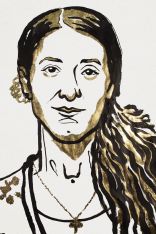 And a third woman wins a Nobel Prize in 2018: Nadia Murad. She is a survivor of the IS-terror against the Jesids in northern Iraq. Her terrible experiences made her a convinced fighter for human rights and a UN ambassador for the dignity of survivors of human trafficking. She receives the Nobel Peace Prize together with Denis Mukwege “for her efforts to end the use of sexual violence as a weapon of war and armed conflict."

US20180251555A1 (1,58 MB)) and Tasuku Honjo were awarded the Nobel Prize for Medicine “for their discovery of cancer therapy by inhibition of negative immune regulation”.