Don´t get in my way: Melli Beese in her "Taube"

Melli Beese took off 110 years ago: She was the first woman to acquire a „Flugzeugführerlizenz“ (pilot's licence). Germany's first female pilot had to overcome enormous resistance before she passed the exam on 13 September 1911 - the day of her 25th birthday. The aviation pioneer, constructor and entrepreneur fought hard for her place in history - as a figure who was as brave as she was tragic in the end.

Amelie Hedwig Beese, born in 1886 as a "higher daughter" near Dresden, never took the easy way: in a time when women were still primarily expected to care for children and kitchen and to got to church, she unflinchingly pursued higher goals. As a woman, she could not study sculpture anywhere in the German Empire, so she went to Stockholm. There she became enthusiastic about sailing and followed with fascination the reports about the latest progress in aviation.

Back in Germany, she attended lectures in mathematics and mechanics at the Technikum Dresden as a guest student in 1910. But theory was not enough for her - she wanted to fly herself. This was unheard of at the time in Germany women were not even allowed to vote. Flying, still in its infancy, was the domain of foolhardy men. But there were role models for Beese: the French woman Élise Deroche was the first woman in the world to pass the pilot's test on 8 March 1910.

Magnificent men only in the flying machines? 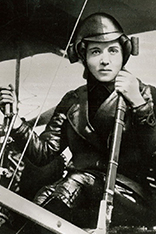 The "Flugmaschinen Wright GmbH" of the American motor flight pioneers Orville und Wilbur, which had set up at Johannistal Airport in Berlin, had already once come into contact with a female student pilot: the famous aerialist and parachute inventor Käthe Paulus. Nevertheless, Wright sent Beese on to "Ad Astra", where Robert Thelen (the later designer of the "Albatros D" WWI fighter plane) reluctantly accepted her as a student pilot.

During a flight in December 1910, Beese and Thelen had an accident after a technical defect. The student broke her foot. She was given morphine for the pain, which is said to have led to a lifelong addiction.

After the crash, Robert Thelen refused to continue teaching her; women on board obviously brought bad luck, he is supposed to have said. Beese searched for months for a new flying school and finally found it in 1911 at Rumpler-Werke. Edmund Rumpler, owner of the works and later creator of the legendary "Tropfenwagen", whose cd value still amazes car designers today, expected more public attention for his company from a female pilot.

Life-threatening "pranks" against the female "intruder" 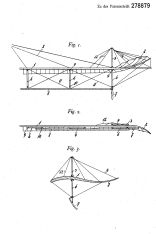 Only now did Beese really learn what it meant at that time to have dared to enter a man's world as a woman: she was ridiculed, ignored, antagonised and even sabotaged by her fellow students. Her flying lessons were cancelled at short notice or taken by others, the planes suddenly ran out of fuel or were allegedly defective. On one occasion, Beese noticed just in time that the wing bracing of her plane had been looseend, which would have led to a crash. Her instructor Hellmuth Hirth dismissed this as a "prank" and indirectly blamed her; after all, she had entered a "man's territory".

No wonder Melli Beese's enormously expensive training dragged on for months. On 13 September 1911, however, she arrived at Johannistal airfield in the early morning long before the other flight students, accompanied by specially appointed witnesses, flew the prescribed manoeuvres with her Rumpler pigeon and passed her exam. She received the aircraft pilot's licence number 115, making her the 115th person and first woman to be officially allowed to fly in Germany. By the beginning of the First World War, only a handful of other women had managed this in Germany; worldwide there are said to have been 34.

Own school, own aircraft factory 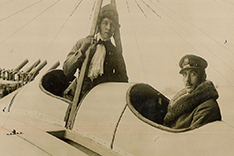 Beese achieved respectable successes in flying competitions and set a new altitude record for women. Then, together with her colleague Charles Boutard (pilot's licence no. 176) and some supporters such as the "Odol" manufacturer August Lingner, she founded the "Flugschule Melli Beese GmbH". The streamlined and well-founded training offered there ensured a good reputation and economic success for the school.

Beese and Boutard, who married in 1913, produced their own aircraft, the "Melli Beese Taube". It was a further development of the Rumpler Taube, which in turn was based on a design by the Austrian engineer Igo Etrich (

FR410711),which had no patent protection in the German Reich. Beese offered her "Taube" monoplane much cheaper on the market than Rumpler – to his annoyance. 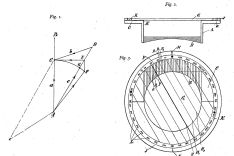 Beese distinguished herself not only as a pilot and entrepreneur, but also as an engineer: Among other things, she designed a "dismountable aircraft", which she applied for a patent in 1912 (

DE278879). She also presented a "method and device for automatically determining the drift of aeroplanes and airships" (1915;

DE306635), a remarkable mechanism for safe navigation in the air. In addition, Boutard and Beese worked on the construction of a seaplane.

On the eve of the First World War, the Beese-Boutard couple was harassed by the authorities because of his French citizenship. Then, at the outbreak of war, they had to close their aircraft factory and school and were no longer allowed to enter the airfield. Boutard was initially interned as an "enemy alien", and later they were both placed under house arrest.

The sad end of the pioneer 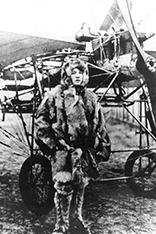 Not a bear costume, but an "aviator's fur coat" common at the time

Badly damaged in health and economically ruined, both tried to obtain compensation for their confiscated businesses after the war. After years of litigation, they received little due to inflation, and even that was lost due to bad investments. They were planning a flight around the world with two planes as a desperate PR project, but did not get the necessary financial support. When her marriage finally failed and her attempt to renew her flying licence failed, Melli Beese took her own life on 21 December 1925.

Charles Boutard (1884-1952) later made a living as a chauffeur and lived in Berlin until his death. Today, schools and streets in Germany and France are named after both of them. A Swiss watch company has registered Melli Beese's name as a trademark (015963275).