Birthday of Hedy Lamarr / Day of the inventor

Hollywood star, "most beautiful woman in the world", inventor: Hedy Lamarr was one of the most dazzling women of the 20th century. She embodied the beauty ideal of her time, was a scandalous superstar - and author of a visionary patent.

Hedwig Eva Maria Kiesler was born in Vienna on 9 November 1914 as the daughter of a bank director and a concert pianist. She is said to have taken a musical clock apart at the age of five to understand how it works. The wild child became an actress and soon shot with stars like Heinz Rühmann. Then she became famous - and infamous – over night: In the Czech film "Ekstase" (Ecstasy) from 1933 Hedwig Kiesler appeared naked - the first nude scene in a feature film! And there was an even more audacious scene in this film with a close-up of her face in which she seems to experience an orgasm. A perfect scandal it was indeed, with the churches raging and the film being screened only censored or not shown at all in the cinemas ("Ekstase" by Gustav Machatý is, by the way, despite its sensational title and the lubricous scenes in fact a sensitive tragedy). 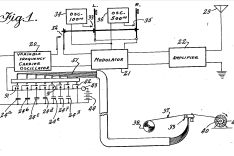 In the same year Kiesler married the armament manufacturer Fritz Mandl, who was chummy with the fascist greats of his time and received them at his home. In these salons there was often talk about weapon technology (Lamarr skeptics think that she "picked up" one or the other piece of specialized knowledge there). Mandl always tried to do business with Hitler's Germany, although he (like Kiesler) had Jewish roots. He was very jealous, held his beautiful young wife like a prisoner, forbade her to act and tried to make all copies of "Ekstase" disappear.

In 1937 Hedwig Kiesler ran away, left her first husband (five more were to follow) and set off to conquer Hollywood. With the tailwind of the "Ekstase" scandal she succeeded. The studio MGM signed her, gave her the screen name Hedy Lamarr and marketed her as "the most beautiful woman in the world". She played alongside James Stewart and Clark Gable, earned a lot of money and became a style icon. Disney is said to have designed his "Snow White" after her model, and the comic character "Catwoman" is said to be inspired by her. In short: she was the glamour in person. But that didn't seem to mean much to her: "Any girl can be glamorous," she said, "you just have to stand still and look stupid“.

The diva and the composer 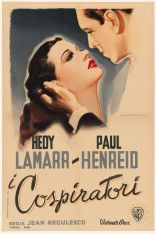 Italian poster for "I cospiratori“

During World War II, Lamarr's Hollywood career was at its peak, but she "didn't just want to sit there and make a lot of money when the world was in such a state," George Antheil later recalled. The eccentric composer Antheil, the "enfant terrible" of the American music scene, had become one of the most famous composers of his time overnight with the celebrated and controversial premiere of his "Ballet Mécanique" in Paris in 1926. In this key work of modernity, 16 mechanical pianos were supposed to be used synchronized with a film (in addition to a lot of percussion, propellers and sirens!), but technically this did not work. It was precisely this problem of synchronisation, which Antheil and Lamarr discussed at length, that led to their invention (there are other versions of the prehistory of the patent in circulation, but this is probably the most plausible).

US 2292387A in the USA on June 10, 1941: „An object of the invention is to provide a method of secret communication which is relatively simple and reliable in operation, but at the same time is difficult to discover or decipher… (it involves) the use of carrier waves of different frequencies, and is especially useful in the remote control of dirigible craft, such as torpedoes.“

Their „system as adapted for radio control of a remote craft, employs a pair of synchronous records, one at the transmitting station and one at the recieving station, which change the tuning of the transmitting and recieving apparatus from time to time, so that without knowledge of the records an enemy would be unable to determine at what frequency a controlling impulse would be sent. Furthermore, we contemplate employing records of the type used for many years in player pianos, and which consists of long rolls of paper having perforations variously positioned in a plurality of longitudinal rows along the records.“

By trying to solve the rpoblem of how to synchronize the player pianos with their perforated paper records, Lamarr and Antheil invented the frequency hopping method: They described a solution how the radio transmitter and the receiver in the torpedo could simultaneously jump from frequency to frequency, which made it impossible for an enemy to locate and interfere with the radio link. 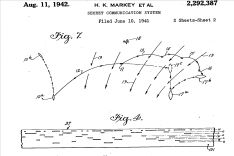 The authors of US 2292387 are named "Hedy Kiesler Markey et al." (Lamarr's maiden name and the name of her then husband Gene Markey). With the frequency hopping method, the two unusual inventors showed telecommunications the way into the future: GPS, WLAN, Bluetooth and smartphones would be practically unthinkable without this principle. In wireless communication systems, frequency hopping makes it possible for many users to communicate simultaneously with less signal interference. Multiple signals can use the same frequency; if one fails or is blocked, it jumps to another. Bluetooth transmitters now use the technique across multiple radio channels (Frequency Hopping Spread Spectrum, FHSS). The Jewish Museum Vienna therefore calls his

The US Navy, however, whom Lamarr and Antheil wanted to help to fight the Nazis, did not use the patent it had been entrusted with. Allegedly the saying was made that "unfortunately, no piano could be put into our torpedoes". Lamarr was advised to stick to her last and put her popularity as a star oft the silver screen at the service of the good cause and to promote war loans (which she did very successfully).

Lamarr is said to have devised a number of other inventions, but no further patent applications are known from her. Ten years after US2292387A was filed, the US Navy returned to it when it developed a "sonobuoy" to discover submarines. Lamarr's idea was taken up and further developed. In the Cuban crisis of 1962, all US ships were armed with torpedoes controlled by a frequency-hopping system. The rest is technical history.

Lamarr and Antheil, who died in 1959, the year their patent expired, did not earn a cent with their invention. Honor also came very late. Decades after the end of her screen career, when she lived lonely and withdrawn in Florida, Hedy Lamarr received the Electronic Frontier Foundation Pioneer Award in 1997. Long after her death on January 19, 2000, she was posthumously inducted into the National Inventors Hall of Fame in 2014; Google dedicated a Doodle to her on her birthday in 2015. Today, November 9 is celebrated as

Tag der Erfinder (Inventor´s Day) in German-speaking countries - in honour of one of the most unusual inventors of all time.

What does Hedy Lamarr´s "Secret communications system" have in common with innovative folding maps, football screw-in boots or expansion plugs? All these ground-breaking inventions have one thing in common: They did not come from the R&D department of a company but from inventors who filed patents for them under their own name. The German Patent and Trade Mark Office (DPMA) has looked into such applications of independent inventors in a current analysis – with interesting results concerning the origin, gender and field of activity of the applicants.