All Nobel prize laureates of 2020 (Drawings by Niklas Elmehed)

Four women will receive a Nobel Prize this year - an extraordinary achievement in the history of this award. The number of female prizewinners in Physics thus increases by a third: Andrea Ghez is only the fourth woman to get this award in almost 120 years. In Chemistry, the number of female prizewinners rises from five to seven, as Emmanuelle Charpentier and Jennifer Doudna share the prize this year. In addition, Louise Glück, a lyricist, receives the Nobel Prize for Literature (as the 16th woman in this category).

Only in 2009 more women received Nobel Prizes. The increasing number of female prizewinners in recent years shows the growing role of female researchers in science - and perhaps also the Academy's efforts to refute the accusation that it has treated female scientists unequally for decades. Of the 930 Nobel Prize winners since 1901, only 57 were women.

The discoverers of the gene scissors awarded 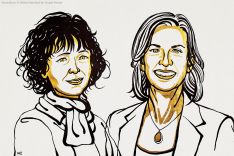 Emmanuelle Charpentier and Jennifer Doudna actually hoped to develop a new form of antibiotics when they studied the immune system of a streptococcal bacterium. Instead, in 2012, they discovered a molecular tool with which it is possible to make precise cuts into the genetic material and thus make changes to the code of life (see

As the discoverers of the genetic scissors CRISPR/Cas9, Charpentier (head of the Max Planck Research Unit for the Science of Pathogens in Berlin) and Doudna (Berkeley) have become world-famous and have already received numerous awards. Now they share the 2020 Nobel Prize for Chemistry. According to the Academy in Stockholm, CRISPR technology „has had a revolutionary impact on the life sciences, is contributing to new cancer therapies and may make the dream of curing inherited diseases come true“. 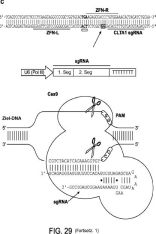 The work of the two researchers is naturally also reflected in the patent literature. Doudna last applied for a further development of CRISPR in the USA in June this year ("Type C CRISPR/CAS effector proteins for cleaving SSDNAS and detecting target DNAS",

Jennifer Doudna spoke with the Academy and expressed her optimism that her award could have a signal effect: „I think among women and girls sometimes there’s a sense that no matter what they do that their work will not be recognised the way it would be if they were a man. And I just hope that this prize and this recognition changes that at least a little bit, and that it’s encouraging to other women who are in science, or even in other fields, to realise that their work can be honoured and that their work can have a real impact.“ 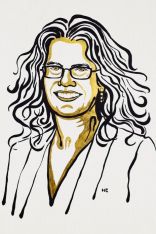 Andrea Ghez, professor of astronomy in Los Angeles, is only the fourth woman to receive an award in physics. After Marie Curie in 1903, it took 60 years before Maria Goeppert-Mayer won. Again, decades passed before Donna Strickland received the prize in 2018. Only two years later, another woman wins - a good sign for all female scientists in the world. Ghez thinks so, too: „To me it’s always been very important to encourage young women into the sciences“, she said in an interview with the Academy.

Ghez shares the Nobel Prize in Physics 2020 with two colleagues. In addition to the British Sir Roger Penrose, who teaches in Oxford, a German researcher is also receiving the coveted prize: Reinhard Genzel, who heads the Max Planck Institute for Extraterrestrial Physics in Garching near Munich.

The three are being honored for their research on black holes. Penrose, a luminary known far beyond specialist circles, once proved mathematically that the formation of black holes is a confirmation of Albert Einstein's general theory of relativity. The Royal Swedish Academy of Sciences awards him half of the prize „for the discovery that black hole formation is a robust prediction of the general theory of relativity“. The other half is shared by Reinhard Genzel and Andrea Ghez "for the discovery of a supermassive compact object at the center of our galaxy".

A note in the margin: For a physicist and mathematician like Penrose, patent applications are rather unusual, but the Briton had a kind of geometric decoration pattern patented: "Set of tiles for covering a surface"(

US4133152): : „The tiles of the invention may be used to form an instructive game or as a visually attractive floor or wall covering or the like.“

Successful in the fight against hepatitis C 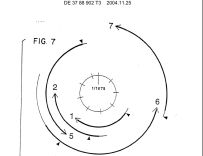 This year's medical prize is awarded to three scientists who have made a decisive contribution to the fight against blood-borne hepatitis. Hepatitis C is a global health problem; it can cause liver cirrhosis and liver cancer. The discovery of the hepatitis C virus by the Nobel laureates was a groundbreaking achievement in the ongoing fight against viral diseases. Thanks to Harvey J. Alter, Michael Houghton and Charles M. Rice, highly sensitive blood tests for the virus are now available, which have largely eliminated hepatitis infections after blood transfusions.

All three scientists are involved in numerous patents. Michael Houghton's work was reflected, for example, in "Hepatitis Delta diagnostics and vaccines, their production and use"(

DE69620432T2 (3,8 MB),registered 1996). Harvey Alter was most recently involved in "Methods and compositions for detecting transfusion-transmitted pathogens" ( 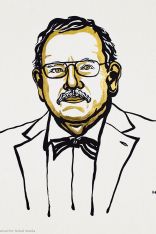 This year's Nobel Prize for Economic Sciences is shared by the US economists Paul R. Milgrom and Robert B. Wilson „for improvements to auction theory and inventions of new auction formats.“ The Nobel Peace Prize goes to the United Nations World Food Programme (WFP) for its fight against hunger.

Due to the pandemic situation, this year there will be no traditional Nobel Prize week with ceremonial award ceremonies and banquet in Stockholm. The prize winners will receive their awards on a small scale in their home countries. Reinhard Genzel, for example, will be given his award in the Bavarian State Chancellery in Munich.

All events of the

Nobel Prize Week (Dec 5-13th), including lectures and concert by Igor Levit, can be followed online.