Winner of the European Inventor Award 2019

Her invention is used in oncology, at archaeological sites and for solving crimes, throughout the world: Spanish scientist Margarita Salas invented a fast, simple and reliable way to replicate traces of DNA into quantities large enough for full genomic testing. For this she has now received the European Inventor Award 2019 in the categories "Lifetime achievement" and "Popular Prize". In her 50-year career, Salas has supported women in science and advocated investment in basic research and the development of molecular genetics in Spain.

The woman who revolutionized DNA testing 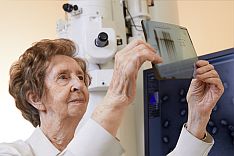 Margarita Salas' pioneering invention made DNA testing fast and reliable and enabled it to be used in a variety of applications. After receiving a doctorate in biochemistry from the Complutense University of Madrid in 1963, Salas worked for three years together with Nobel laureate Severo Ochoa at New York University. Then, she returned to her native Spain and, in 1967, founded the country's first research group in the field of molecular genetics at the Spanish National Research Council (CSIC) in Madrid. At CSIC, she discovered that a bacterial virus called φ29 produced an enzyme known as φ29 DNA polymerase. The enzyme can assemble DNA molecules much faster and more accurately than other alternatives – with fewer than one error in a million base pairs.

Salas succeeded in isolating the enzyme and demonstrated that it also worked in human cells, which led to groundbreaking applications for DNA testing. For the first time, this high-accuracy replication made it possible to obtain reliable results from small quantities of genetic material. The technique she invented is used today in medical research to study microbes that cannot be cultured in the laboratory. It allows oncologists to zoom in on small sub-populations of cells that could give rise to tumours. It also helps forensic experts and archaeologists because DNA traces collected at crime scenes and archaeological sites can now be replicated by φ29 DNA polymerase to identify victims, suspects and even fossils.

Patent applications filed by Salas have led to the commercialisation of user-friendly DNA-amplification kits. She and her team at CSIC filed the initial patent application for φ29 DNA polymerase and its applications in the USA in 1989. The patent was granted in 1991 and the European patent followed in 1997. Further patents followed over the years. However, the patent for the method for the use of φ29 DNA polymerase remains the most profitable ever filed by CSIC: It accounted for more than half the organisation’s royalties between 2003 and 2009, returning millions in investment to publicly funded research and enabled further advances in genetics for Salas and her team.

A life devoted to research 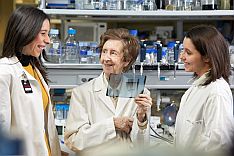 The Spanish scientist has consistently used her public profile to promote basic research and encourage women to participate in science. "When I started my doctoral thesis in 1961, there were almost no women doing research in Spain," she says. "However, nowadays more women than men begin working on their doctoral theses in our laboratories."

Today, at the age of 80, Salas continues to go to the laboratory every day and is working on further expanding the properties of the φ29 DNA polymerase. "Research is a real passion of mine; I cannot imagine life without it," she says, "I hope I can continue doing research for many years to come."

The European Inventor Award is conferred annually by the European Patent Office (EPO). This year, the award ceremony took place in Vienna on 20 June, as part of a gala event. More information and videos about Margarita Salas and all nominees and award winners are available at the