At the Mission Control Center, everybody celebrates the return of the Apollo 11 moon landers

From the Apollo program to the Space Shuttle era, Barbara Crawford Johnson was the woman who set the course for the spaceships. She worked for 36 years at NASA or the Rockwell International Space Division, helping to control the Skylab space station and setting the direction for the Shuttle program.

But the highlight of her career was the moon landing: "The whole concept of flying to the moon, letting people land and bringing them back just blew me away," she said later. "That was the best part."

Crawford Johnson´s great role model was the pilot Amelia Earhart. Even in high school, Johnson (born 1925) developed a passion for flying. Later, she made friends with pilots, flew with them at first and then alone. Once a flight with a borrowed plane ended in a tree. In the meantime, she studied and was the first woman to graduate in engineering at the University of Illinois. She financed her studies through part-time jobs as a waitress, cloakroom attendant or "beetle teller" in the biological faculty.

From the air-to-ground to the moon missile 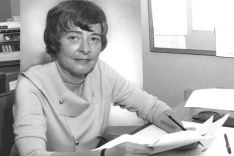 In 1946 she began working for North American Aviation. She worked on Navajo and Hound Dog rockets before her company won a major contract to work on the Apollo program. In 1968, she was appointed head of the Mission Requirements and Evaluation Department for the Apollo program. So Crawford Johnson was one of only a few senior female executives at Apollo.

She led a group of more than 100 engineers (almost all men!) who performed many tasks ranging from flight test requirements, to takeoff and landing trajectory and monitoring resources such as oxygen and batteries. However, the main focus of their work was the re-entry of a spacecraft into the atmosphere. Johnson's group developed a system that could graphically indicate whether the automatic controls were working properly and whether the spacecraft was moving within safe orbits. If not, the astronauts could take over and control it manually. 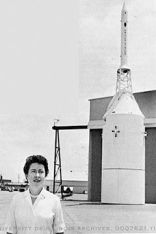 Crawford Johnson in front of the Apollo simulator

Long after her retirement (she had to withdraw from the Space Shuttle program in 1981 for health reasons), she regretted that NASA had turned its back on the moon after Apollo instead of working towards the construction of a lunar base, for example. "I think that was a mistake."

Johnson died in 2005, and twenty years later, NASA announced that there will be another moon landing.