16 July 1969. The launch of the Saturn V rocket on its way to the moon. The whole firing room at Kennedy Space Center is packed with men. The whole room? No. There is one woman among the many nervous engineers monitoring the beginning of the Apollo 11 mission: JoAnn Morgan.

Born in Huntsville, Alabama, in 1940, JoAnn loved mathematics and science even as a child. After her family had moved to Florida, she watched the rocket launches in Cape Canaveral from the beach. Since then she has got “rocket fuel in her blood,” as she said. When she was 17 and had just graduated from high school, there was an opportunity for an internship at the US Army Ballistic Missile Agency. She grabbed it.

In the following summers, she worked for the newly founded NASA and simultaneously studied at the University of Florida. Her potential and talent in science and communications was even noticed by Wernher von Braun and Kurt Debus, the first director of the Kennedy Space Center. He gave Morgan an opportunity to attend other courses and hired her as a junior engineer.

“You don’t ask an engineer to make coffee” 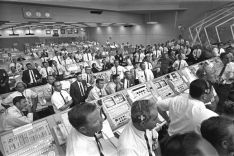 A woman as an engineer? That was highly unusual for her colleagues at the time. Her supervisor, Jim White, carefully prepared the men in a meeting on how to deal with the new colleague. “Well, can we ask her to make coffee?” someone asked. “No,” White rebuked him. “You don’t ask an engineer to make coffee!”

“Everywhere I went, I’d be the only woman in the room,” Morgan later reflects. Again and again she had to overcome resistance, had to battle her way through. She worked for the Mercury, Gemini and Apollo space programmes, was promoted to “senior engineer” – and in spite of that was still not to be permitted in the “firing room” for the Apollo 11 liftoff. But her supervisor fought hard for her, although he had to go all the way to the director. So, Morgan was allowed to participate in the launch – and the historic photos of the only woman in the Launch Control Center were taken.

“I look at that picture, and I hope that photos like the ones I’m in don’t exist anymore,” says Morgan. “I hope all the pictures now that show people working on the missions to the moon and onto Mars, in rooms like Mission Control or Launch Control or wherever – that there will always be several women.”

The launch was the crucial moment in her career, which then took off almost as steeply as the Saturn V. She was the first woman at NASA to be awarded a Sloan Fellowship scholarship, which enabled her to do her Master’s at Stanford.

When she returned to NASA, she became chief of the Computer Systems division. Then, the division was transitioning from using old, room-sized computers to modern smaller computers. “So, my team were having to get used to the new equipment and, at the same time, to me, that is a woman as boss – so that was a lot to choke on for some people,” Morgan said later.

Many other leading positions followed. For example, she was the first woman to become Associate Director of the center later and Director of Safety and Mission Assurance and thus she was one of two people who gave the final clearance for take-off of a space shuttle mission. 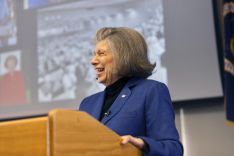 Since she started working there, things had changed, as she recalls: “For the first 15 years at NASA, I worked in a building where there wasn’t a ladies’ rest room. It was a big day in my book when there finally was one.”

winner of many accolades and honours, retired after serving as Director of External Relations and Business Development.