Käthe Paulus was a dazzling figure: courageous pioneer of aviation, daring acrobat, clever inventor and lifesaver: 150 years ago, on 22 December 1868, the developer of the modern parachute was born in Zellhausen near Offenbach.

Even as a child, Katharina "Käthe" Paulus, the daughter of a blacksmith, was fascinated by artistry: she balanced on clotheslines and enjoyed demonstrating artistic exercises. Nevertheless, she decided to learn a down-to-earth craft and became a tailor. A profession that would be very useful to her in the future.

In 1889 Paulus met the famous airshipper and parachutist Hermann Lattemann. The two quickly became a team, both professionally and privately. She learned ballooning and parachuting from him and was able to use her knowledge of tailoring to make and repair balloons. 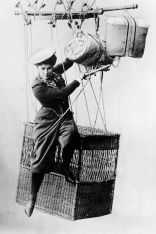 In 1893 Paulus caused a sensation: She climbed to 1200 metres with a balloon and became the first woman in Germany to parachute. As far as we know, she was only the third woman in the world to dare to do so, after the pioneers Jeanne-Geneviève Labrosse (1775-1847) and Elise Garnerin (1791-1853). The leap was the beginning of her long career as an aerial acrobat and the country's first professional airship pilot.

At that time, ballooning was primarily a part of showbiz: Paulus and Lattemann, who also had a child together, went on tour as aerial acrobats with a programme full of airy stunts. Unfortunately, the luck of the two did not last long: in 1894 Lattemann died in a parachute accident. One year later their son died.

Despite strokes of fate she continues

But encouraged by their many fans, Paulus did not give up and decided to go on alone. She invested in new balloons, created a sensational program with daring performances and was the first female aeronaut to tour internationally under the stage name "Miss Polly". She wore a fantasy uniform and performed with a "bicycle balloon" or a trapeze. Her biggest number was a double downfall from the balloon, in which two of her self-made parachutes were used.

Paulus was her own manager, PR specialist, technical director and leading actress all in one. At the height of her career as an aerialist, she was a star that attracted thousands of spectators. Later, she bought herself one of the first motor planes and took flying lessons, but after her teacher crashed, she preferred to stay with the balloon flight. With the beginning of the First World War her time as an aeronaut came to an end.

Lessons from the misfortune 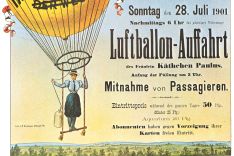 The feeling that the death of her life companion could have been prevented left Käthe Paulus no peace. She was constantly working on the improvement of the conventional parachutes, whose lines were often dangerously twisted by the wind and which required a lot of space. She came up with the idea of artistically folding the parachute and packing it into a cover that could be opened by a special mechanism: the modern parachute was born.

Their invention was characterised by the fact that it was possible to avoid tangling of the carrying lines during the opening process of the parachute. Parachute cloth and carrying lines were folded, packed and fastened according to an ingenious system so that the parachute could unfold reliably.

Second career as a parachute manufacturer 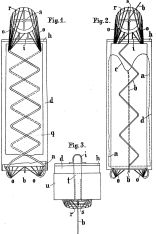 In 1915 she registered her invention with the Kaiserliches Patentamt (Imperial Patent Office) as a "device for attaching parachutes to aircraft". After initial scepticism, the military became interested in Paulus' parachute in 1916 and commissioned her to produce 7000 parachutes. With 30 tailors Käthe Paulus produced the parachutes in Berlin-Reinickendorf and marked them the "K.P." seal of quality.

During the First World War several balloon reconnaissance observers who were shot down survived with the help of their parachutes. Paulus was awarded the "Cross of Merit for War Aid" in 1917. In 1920 she received a patent for her invention in

After the end of the war, things got quiet for the former star. In 1935 Paulus died in Berlin after a long illness. She rests in a grave of honour. Today, several schools and streets throughout Germany are named after Käthe Paulus. Her invention saved human lives and set standards in parachute technology that are still valid today.