100 years ago John Dunlop, the (re)inventor of the pneumatic tyre, died

This story is quite well-known: In 1888, John Boyd Dunlop can no longer watch his son struggle on a tricycle with hard rubber tyres on the bumpy road surface in Belfast and invents the air-filled tyre for him. What is not so well known is that Dunlop was not the first to make this invention. The patent Dunlop received on his "pneu" should never have been granted.

John Boyd Dunlop, who died 100 years ago - on 23 November 1921 - was a veterinary surgeon from Scotland who had settled in Belfast in Northern Ireland. He didn't really have much to do with then newfangled driving devices like the bicycle, but is said to have worked a lot with rubber in his practice. To make his son's tricycle faster and more comfortable, he tinkered with the sheathing of the wheels. He developed a rubber tube that was wrapped in canvas and glued to a wooden rim. A baby's dummy is said to have served as a valve.

With this air-filled tyre, Dunlop junior whizzed happily along the streets of Belfast in the spring of 1888, easily outstripping his comrades. Dunlop realised that the pneumatic tyre held great promise and successfully applied for a patent for his invention at the end of the same year. This marked the beginning of the rise of the Dunlop brand, which is still famous today (including 129659, DE word mark since 1910; DE756765 or EM005125489).

Another Scot was quicker 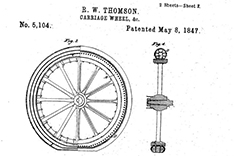 But: Dunlop should never have been granted this patent. The UK Patent Office had overlooked the fact that someone else had already received the patent for a pneumatic tyre some 40 years earlier.
Robert William Thomson (1822-1873) was also Scottish and an extremely talented inventor. At the age of 23, he was granted pneumatic tyre patents in France and the USA (

US5104A). His tyre consisted of a hollow belt of Indian rubber inflated with air and covered with a leather casing. The wheels laid, as it were, "a cushion of air on the ground, rail or track" on which they ran. Thomson demonstrated his "Aerial Wheels" on horse-drawn carriages in London's Regent's Park in March 1847.

But unfortunately the time was not yet ripe for his invention. Like many other ingenious inventor´s ideas, Thomson´s tyre fell into oblivion. But he was luckier with other projects. He developed, among other things, the fountain pen, new types of steam engines and electric ignition devices for blasting, which greatly advanced railway construction. He died a rich and respected man. 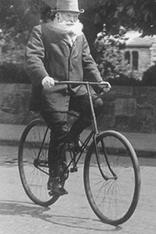 John Boyd Dunlop is said to have known nothing of his compatriot's invention when he registered his idea with the patent office. He further improved his pneumatic tyres and had a series of 50 bicycles fitted with them. With one of these bicycles, William Hume, the previously unsuccessful captain of the Belfast Cruisers' Cycle Club, suddenly achieved spectacular success in bicycle races.

Among others, Hume beat the national champion Arthur Du Cros on 18 May 1889. The latter's father, the entrepreneur William Harvey Du Cros (1846-1918), recognised the marketing potential of the invention. He sought contact with Dunlop and together they founded the "Pneumatic Tyre & Booth's Cycle Agency" in Westland Row in Dublin on 18 November 1889, which was soon renamed "Dunlop Pneumatic Tyre Co. Ltd". The triumphant advance of the pneumatic tyre began.

At the first Olympic Games in Athens in 1896, all cyclists competed with pneumatic tyres.

Dunlop advertisement in Germany, around 1925

However, as the invention became more widely known, Thomson's patent came to light again. Dunlop initially lost his patent. The brothers Edouard and André Michelin from Clermont-Ferrand took advantage of this and produced pneumatic tyres on a large scale. They were also the first to equip the emerging automobile with tyres, thus considerably accelerating its success story.

Dunlop continued to further develop the tyre and was able to obtain new patents for his improvements, which ensured his economic success (see, among others,

GB189410850A). Above all, the valve, which is still named after him today, proved that he was an able inventor. Incidentally, he also applied for patents for developments in completely different fields, such as a skin lotion ( 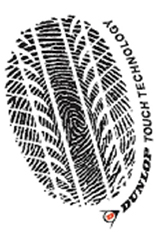 Only four years after the foundation of his company, Dunlop's first foreign branch was established in Hanau. It still exists today. Dunlop was soon to manufacture numerous other rubber products such as golf and tennis balls, floor coverings and brake shoes. The company became one of the first "global players", a worldwide manufacturing company.

John Boyd Dunlop withdrew completely from the company in 1895 and returned to his veterinary practice. Along the way, he and his son worked on new inventions, such as a patented eau de toilette (