And there was light - like never before: When Theodore H. Maiman switched on a flash discharge lamp wrapped around a rod-shaped ruby in Malibu on 16 May 1960, a laser flashed for the first time. One of the most important inventions of the 20th century was made. To commemorate this moment, UNESCO celebrates the

World Day of Light every year on 16 May.

As is so often the case, it was Albert Einstein who had the decisive idea: decades earlier, he had laid out the theoretical foundations for the stimulated emission of radiation with the presentation of the photoelectric effect. Charles Townes and his colleagues James P. Gordon and Herbert Zeiger developed the maser ("Microwave Amplification by Stimulated Emission of Radiation") in the 1950s in the Bell Laboratories in the US. This microwave amplifier can be used, for example, in the transmission and reception technology of satellite stations. Townes was awarded the Nobel Prize in Physics for this in 1964.

From maser to laser 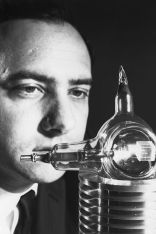 The maser already contained the basic components of the laser. Various researchers were then working on using "optical pumping" to develop a light amplifier from this, i.e. practically a maser that uses visible light. Theodore Maiman was the first to succeed in this.

Maiman, born in Los Angeles in 1927, was an engineer and physicist. He worked in basic research for the Hughes Research Laboratories, which belonged to the legendary billionaire, "Aviator" and film producer Howard Hughes. On 16 May 1960, Maiman succeeded in producing coherent light for the first time with his ruby laser.

When the laser was presented to the press in New York on July 7, 1960, many media raved about a "ray gun". This idea was first coined by the author H.G. Wells, who in 1898 in his novel "War of the Worlds" had the Martians shoot around with it. Comic book heroes of the 1940s such as Flash Gordon fired laser guns; later, series such as Star Trek and Star Wars finally shaped the image of the laser as a super weapon in pop culture. 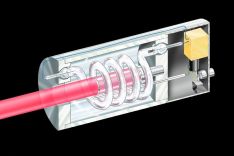 Less than a month later, Maiman presented his invention to the scientific community with an article in the journal "Nature". The article was called "

Stimulated Optical Radiation in Ruby"and was just under 300 words short - probably the shortest article about an important scientific development ever published. In his obituary for Maiman in 2007, Charles Townes wrote that the article was "probably more important per word than any of the papers published by Nature over the past century".

Strangely enough, however, people did not really know what to do with the invention at first. "A solution looking for a problem," Maiman is said to have said about his laser. But then an ophthalmologist tested its use as a light precision tool in optical surgery. And now ideas were bubbling over for what "Light Amplification by Stimulated Emission of Radiation" could all be used for. A real research boom around the laser began. 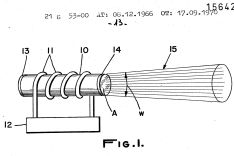 Today, lasers are present in almost all areas of everyday life: at the supermarket checkout, in the DVD player at home, as pointers in presentations... Medicine, measurement technology, industrial production, communication and entertainment electronics are hardly conceivable without the bundled beams today.

Maiman applied for a patent for the laser and, after several disputes, finally received it on November 14, 1967 (

DE1564240B). Within a few years, patents were then filed for a wide variety of lasers based on gases, fibers, semiconductors and more.

And that was not nearly all 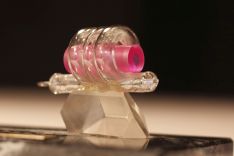 The possibilities of the laser are far from exhausted today. On the contrary, research is hoping to gain many more insights, for example into processes within atoms. Light transmission will also help the computers of tomorrow: Enormous amounts of data could be transferred smoothly and without resistance inside quantum computers using laser light. Atoms, electrons and photons could become carriers of information and thus help computers to achieve an almost immeasurable increase in efficiency.

Maiman received many awards in the course of his life, but was never awarded the Nobel Prize. His invention, however, later benefited him personally once again: In 2000, the "father of the laser" underwent surgery in Munich - by laser. By the way, one of his very first lasers has been on display here in the