Birth of the sound box: Emil Berliner was granted a patent 135 years ago for his „Verfahren und Apparat für das Registriren und Wiederhervorbringen von Tönen“ ("Method and Apparatus for the Registration and Reproduction of Tones"),

Berliner's gramophone, together with the „Schallplatte“ or phonograph record described in the same patent, made the musical experience preservable, independent of the concert hall and, above all, suitable for the masses.

Superior to its predecessors 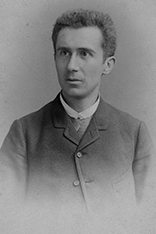 Ten years earlier, Thomas Alva Edison had already introduced his phonograph and presented the first sound recording to the astonished world. Edison also applied for a patent for the phonograph in Germany (

DE49732). Charles Cros had theoretically sketched his "Paléophon" in Paris before, but Edison beat him to it with a working device.

Even earlier, in 1860, Édouard-Léon Scott de Martinville had constructed a machine for graphically recording vibrations, the phonautograph. This device could record sounds, but not reproduce them.

Shortly before Berliner, a team led by Alexander Graham Bell, who became famous as the "father of the telephone," and the physicist Charles Sumner Tainter had tinkered with improving Edison's phonograph and, among other experiments, engraved a sound track in the form of a spiral on the surface of a round wax disc (today on display at

Smithsonian Institute in Washington). However, Tainter and team did not apply for a patent and apparently did not pursue the approach further because of technical difficulties, so that Berliner could not have known about it (Tainter applied for a patent for this recording device in 1887: 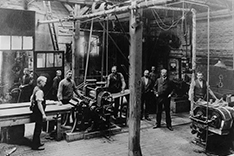 Edison and Croz both used a roller as a recording medium, which was rather impractical and expensive to produce compared to Berliner's disc. Therefore, after the turn of the century, the space-saving, easily reproducible and longer-playing record disc finally gained acceptance on the market and was eventually produced in massive quantities worldwide.

Emil Berliner was born in Hanover in 1851 and emigrated to the USA in 1870. He changed his first name to "Emile" after becoming an American citizen in 1881. His patents of 1887 featured as a technical advancement, among other things, the recording process in a helical sound groove with V-shaped "side writing" (instead of Edison's "depth writing"). It made it possible to improve the sound, expand the range of the sound and, on top of that, was easier to duplicate. This "Berliner writing" is still used for records today.

Later, he improved the gramophone and especially the record further and further by replacing the initially used glass discs first with zinc, then hard rubber, and finally with a mixture with shellac, until they were finally ready for the mass market (see on Berliner's further developments, among others, 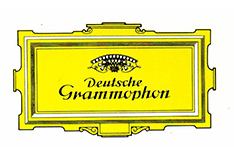 He marketed his inventions with teething problems but entrepreneurial skill and founded the first record companies. Some soon disappeared from the market, but not the Deutsche Grammophon-Gesellschaft, which he founded with his brother Joseph and which still exists today as an independent label (EM000162123, today part of Universal).

Berliner's record disc eventually became a tremendous success. However, since his patent claims were neither very detailed nor comprehensive, the protection could be circumvented relatively easily by many imitators. As a result, numerous record manufacturers developed around 1900, such as the French Pathé Records, which rose to become the world leader before World War I.

Standard for almost a century

Berliner with his original gramophone

For almost 100 years, the vinyl record remained the standard technology of sound reproduction for everyone, before digital formats conquered the music market from the 1980s. In recent years, however, in the shadow of digitalization, vinyl has once again enjoyed increasing popularity among audiophile friends of the analog music experience.

Berliner brings the telephone to Germany

Before the gramophone, Berliner had successfully tried his hand as an inventor in the still young field of telephone technology. In 1877, he developed a microphone for telephones, which he sold to the Bell Telephone Company for a handsome sum. The use of transformers and induction coils in Bell's telephones is also said to go back to Berliner. In 1881, he founded a factory for telephones and microphones in his old home, the "J. Berliner Telefonfabrik", later "Telephon-Fabrik Actiengesellschaft", under the management of his brother Joseph. It played a major role in the introduction of the telephone in Germany. Joseph Berliner's daughter and heiress Klara was murdered as a Jew in the Theresienstadt concentration camp in 1943. 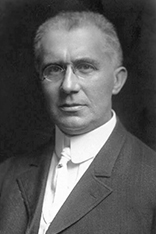 Emil Berliner remained a very creative inventor until the end of his life. He was particularly interested in aviation: He applied for several patents for helicopters or gyrocopters (e.g.

US1472148A). His son Henry was a pioneer of helicopter flight in the USA and founded the "Berliner Aircraft Company", which was later taken over by North American Aviation (today Boeing).

GB268317A). Particularly noteworthy, however, is his patent for a kind of early form of kamikaze drone, the "flying torpedo"(