Martin Cooper with his historic prototype and a modern phone in 2009, recieving the Prince of Asturias price

As early as December 1989, the then Post (Mail) Minister (yes, there was such a thing!) Christian Schwarz-Schilling had granted the first licences for digital mobile communication networks. The basis was the mobile radio standard GSM, which originally stood for "Groupe Spécial Mobile", today for "Global System for Mobile Communications". Analogue mobile telephone networks had existed in Europe since the late 1950s, but it was only the GSM standard that made possible a Europe-wide mobile telephone system that was compatible with ISDN or analogue telephone networks and suitable for mass use.
The contract was awarded to Deutsche Telekom ("D1") and the Mannesmann Group ("D2"). But it was not until 1 July 1992 that the D1 network was officially launched. Before that, the necessary infrastructure (transmitters, radio masts, etc.) had to be built and, above all, suitable devices had to be brought onto the market. The first mobile phones were still very expensive (and so were the tariffs!), heavy and inefficient. But nevertheless, this was the beginning of the success story of mobile phones, which have revolutionised our everyday lives ever since.

Communication revolution with a slow start

There are only a few inventions that have really changed people's lives forever. Apart from the Internet, nothing in recent decades has influenced communication, social behaviour, the world of work and leisure more fundamentally than the mobile phone.

It is now almost 40 years since the first mobile phone came onto the market. And nearly 50 years ago the first conversation with a mobile phone was conducted. Both events are inextricably linked with Martin Cooper. 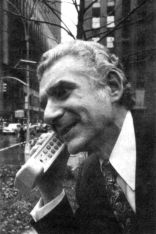 Born in Chicago in 1928, the engineer led a Motorola development team together with chief designer Rudy Krolopp that produced the first prototype of a mobile phone. Mobile telephony had been possible in the USA since 1946 - in the car. These devices were very large and not much cheaper than the car itself; connections were manually switched. Much later there were also car telephones which were portable - if you were strong enough to carry a heavy apparatus the size of a suitcase with antenna and handset. These devices were miles away from a real mobile phone.

On April 3, 1973, however, Martin Cooper stood on 6th Avenue in New York and was the first person to do something that billions of people do several times a day today: he made a call from his cell phone.

However, the first person to receive a call from a mobile phone should not have been particularly happy about it: Cooper called his colleague Joel Engel from the competing company Bell Labs, who was thus suddenly shown who was technically ahead.

The long road from patent to market 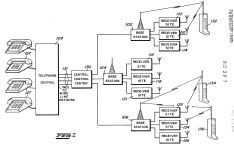 On October 17, 1973, Cooper and his team applied for a patent in the USA for their development as a "radio telephone system". It was granted on 16 September 1975 (

US 3906166A (1,74 MB)). The application in Germany was filed on 28 December 1973 under the title " Funk-Telefon-Anordnung mit einer Zentralstation und einer Mehrzahl von beweglichen Telefon-Teilnehmer-Stationen (Radio telephone arrangement with a central station and a plurality of mobile telephone subscriber stations)" (

DE 2365043 B2 (1,3 MB)). A huge number of applications for patents, trademarks and designs related to mobile telephony was to follow in the next few decades. There is no end in sight, as a glance at the DPMA's databasesDatenbanken des DPMA shows.

After Cooper's first telephone call with the prototype, however, it was to take another ten years before the first mobile phone came onto the market in the USA. However, this was less due to the companies (Motorola invested many millions in optimising the first mobile phone) than to the Federal Communications Commission (FCC), which did not regulate the frequency question until 1983.

On September 21, 1983, the first commercial mobile phone was finally approved by the FCC. It was the Motorola DynaTAC 8000X: 800 grams, 33 centimeters long, nearly 4000 dollars expensive. 30 telephone numbers could be stored. You could talk with it for less than an hour, charging took ten. Nevertheless, the bone-shaped device sold well.

... and the even longer way to the mass product 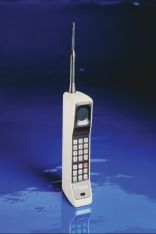 But it took more than another decade before mobile phones became a mass product after the introduction of nationwide digital mobile networks - small, powerful, affordable. Revolutions sometimes progress very slowly. But at the latest when mobile phones became "smart" and Internet-enabled, the communication revolution of postmodernism was finally perfect.