On 20 January 1885, one of the first patents for a roller coaster was granted. LaMarcus Adna Thompson, probably the most important pioneer of amusement rides in the USA, received protection for his "Roller coasting structure"(

US310966A). Thompson had built a "Switchback Railway" the year before in the famous amusement park on Coney Island near New York. This marked the beginning of the roller coaster's unbroken triumphal ride into amusement parks around the world.

Thompson's patent is often held for the first roller coaster patent, but there were predecessors: Already in 1872, John G. Taylor from Baltimore had received a patent for his "Improvements in inclined railways" (

US128674A), an early roller coaster. However, it is not certain whether Taylor's railway was ever actually built.

Sledging in the "Russian Mountains“ 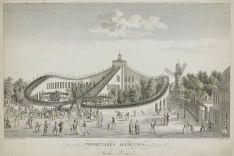 There are even older patents: Already in 1869 Constantine de Bodosco and Pedro de Rivera from Russia and Spain respectively had their "Artifical sliding hill" protected in the USA(

US95095A). This slide directly refers to the predecessors of roller coasters, the so-called "Russian Mountains". Such artificial sliding hills with a layer of ice became popular in St. Petersburg in the 17th century - a wintery pleasure for the upper class. Tsarina Catherine the Great is said to have loved them.

The "Russian Mountains" soon became popular in Europe too, especially in France. At some point the idea must have come up to equip the sliding sledges with wheels so that they could be used all year round. Around 1812 "Les Montagnes Russes à Belleville" is said to have been built in Paris, perhaps the first roller coaster in the world. Later the "Promenades Aériennes" in the Jardin Beaujon was added, which was equipped with wheel carriages and fixed track rails. 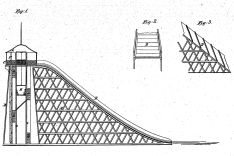 In Pennsylvania the Mauch Chunk Switchback Railway was built in 1827. It used a natural gradient to transport coal from a mine; uphill it was pulled by mules, later by steam engines. After a few years, passengers were allowed to ride on it for the first time. The 14-kilometre journey eventually became a popular tourist attraction, especially after the mine was closed in 1872.

This gravity-driven coaster inspired LaMarcus Thompson to create his "Switchback Railway" and initiated his rise as the "father of roller coasters". He founded the "L. A. Thompson Scenic Railway Company", applied for several more patents in this field and built numerous, ever larger and more exciting "coasters". The speeds were rather low, but the coasters were decorated with lush artificial scenery and equipped with light effects. Thompson also built his coasters in Europe, some of which are still in existence, for example at the Tivoli in Copenhagen or at Blackpool, England. 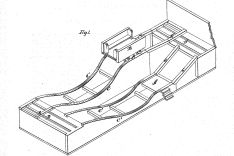 Over the years different types of "coasters" developed, such as "Flying", "Inverted", "Dive" or "Stand-up". New patents pushed the state of the art in this field as well. One of the most influential was registered by John A. Miller in 1919: Simply titled "Pleasure railway structure"(

US1319888), it describes (among other features) the "underfriction wheel", which is an additional wheel under the guide rail which makes derailment impossible and thus significantly improves safety. It also allowed much higher speeds and a more unusual track layout. Until today practically all roller coasters are built according to this principle. 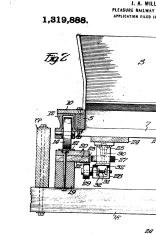 Almost from the very beginning, coaster tracks included spectacular loopings, but this often led to injuries of the cervical spine due to the G-forces. Only with the introduction of an elliptical circular track and especially thanks to the development of the clothoid looping by Munich engineer Werner Stengel the loopings became safe. Stengel is one of the most important roller coaster engineers of the last decades, which is also reflected in patents like 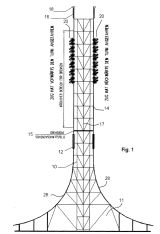 New registrations such as

US8943976B2 (1,17 MB) continue to pusk coaster technology forward. The only limits are set by the human body and its ability to withstand the G forces.