A short flight into history

They are as famous as Columbus, the Wright Brothers: every child today knows Orville and Wilbur Wright as the world's first powered aviators. On 17 December 1903, they made the first short flights with their "Flyer" on the beach of Kill Devil Hills near Kitty Hawk in North Carolina. However, it took several years before their pioneering achievement was fully recognised. Then, however, their fame as the first powered aviators could not be shaken until today - despite several new discoveries.

Wilbur Wright (born 1867) and his brother Orville (born 1871) had been searching for the secret of flight for some time. But it was the news of Otto Lilienthal's fatal crash in 1896 that prompted the bicycle manufacturers to devote themselves entirely to the subject. They were able to draw on the preliminary work of Lilienthal and other masterminds such as Octave Chanute. For example, Lilienthal had identified lift on the curved aerofoil as the key to human flight. What he could no longer solve, however, were the basic questions of control and propulsion. Lilienthal controlled his gliders by shifting weight, which became problematic in exceptional situations and led to his crash. And he strove for a propulsion principle that imitated the flapping of wings, but this still does not work even today. The Wrights solved both problems.

The invention of three-axis control 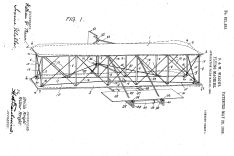 The Wrights' patent specification illustrates the warping of the wings (US821393A)

They designed aerodynamic rudders that allowed them to move their aircraft around its three axes: The elevator raised or lowered the glider's nose, the rudder steered left or right, and the aileron allowed turns around the longitudinal axis. This principle of control still applies to most aircraft today and is the real masterstroke of the Wright brothers.

This control and other features of their glider were among the claims of the patent they filed on 23 March 1903, long before their half-flying hoppers at Kitty Hawk. A motor drive was not yet provided for in the application. On the basis of this patent, which was granted on 22 May 1906 with the number

US821393A (1,21 MB), the Wrights were soon to undertake extensive attempts to force any competition to take a licence.

History on the beach 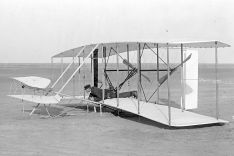 Wilbur on the Flyer after a failed flight attempt on 14.12.1903 (photo probably by Orville Wright)

The motorised "Flyer", which was built in 1903, was constructed wrong way around from today's perspective: the elevator unit was at the nose instead of at the tail; the two propellers pushed the aircraft instead of pulling it. The pilot lay on the lower wing of the biplane directly next to the engine and operated the rudders from there. Instead of wheels, there were skids.

On the morning of 17 December 1903, Orville and Wilbur took turns making several flight attempts. At 10.35 a.m., Orville made history for 12 seconds: he flew 37 metres. This moment is considered the first powered flight in history.

The other flight attempts that morning were longer; Wilbur even managed 260 metres. Afterwards, the wind whirled the Flyer around and damaged it, so that it never flew again. 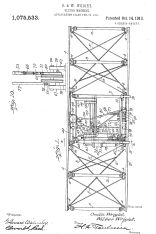 The Wrights sent a telegram to their father asking him to inform the press of their success. The news was spread around the world, but did not elicit the response one would expect from today's perspective. At that time, there were frequent reports of flight attempts all over the world. The Wrights' success was only occasionally perceived as the breakthrough it is considered to have been today.

This was also due to the brothers' business strategy. From the very beginning, their goal was the commercial exploitation of their flying machines. Therefore, not least on the advice of their patent lawyer Henry Toulmin, they wanted to keep their design secret until it was ready for the market. They withheld the pictures of the first flight and did not give any public demonstrations for a long time. They had the military in mind as a potential customer.

The brothers continuously improved their Flyer in secret (see

US1075533A (1,22 MB)). "Flyer III" was their first aircraft worthy of the name and could stay in the air for up to half an hour. Only now - several years after their first flight - did the Wrights seek the light of day again. From 1908 onwards, they presented their "Model A", which was ready for series production, in flight shows all over the world.

The Wrights in Europe 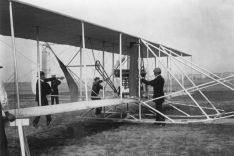 Orville Wright with the "Model A" in Berlin-Tempelhof in 1909

It was not least the competition that had forced them to do this: In the autumn of 1906, Alberto Santos Dumont had successfully performed a few short public flights before the eyes of the Aéro-Club de France and was considered the first successful powered aviator in the world at the time. Now the Wrights went on the offensive, published photos of their first flight and used their patent to conquer the European market.

In 1909, Orville Wright demonstrated the capabilities of the "Model A" in Berlin-Tempelhof. He had brought the biplane with him from America. This aircraft, which marked the beginning of powered flight in Germany, can be seen today in the

Deutsches Museum in Munich right next to the DPMA. It is considered to be the only original "Model A" still in existence.

The Wrights founded factories and flying schools in Berlin and elsewhere. They now temporarily dominated the market. In 1909, the "Flugmaschinen Wright GmbH" was founded in Berlin-Johannisthal, which built around 60 biplanes under licence until 1913. It was the second aircraft company in Germany after August Euler's Flugmaschinenfabrik. 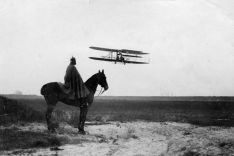 As early as 1904, the Wrights had applied for patents for their original Flyer in Germany and France. While the French patent (

AT23174B)- was granted, the German Imperial Patent Office rejected the application because it apparently no longer considered it a novelty in view of public speeches made by Wilbur and Chanute in 1901 and 1903.

Patent disputes in several countries soon overshadowed the Wrights' work. They were so busy with their business and litigation that they hardly developed their aircraft any further. By 1911, their European competitors had already overtaken them technically; their machines were soon considered obsolete. Especially Wilbur, the brothers' development head, was practically fully occupied with patent disputes when he suddenly died of typhoid fever in 1912.

In the USA, the Wrights were particularly at odds with their competitor Glenn Curtiss. The lawsuits damaged the brothers' reputation. Curtiss sneered that the Wrights would sue if someone jumped in the air and waved their arms. In fact, they suppressed the further development of aviation in the USA to an extent that the Air Force had to resort to French aircraft when it entered WWI in 1917, as there were no competitive American fighter planes.

The deal with the Smithsonian Institute 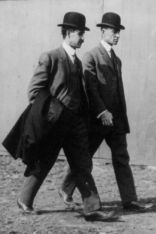 The Wright Brothers in 1910 (Orville on the left)

With Wilbur's death, the era of the Wrights as innovators was finally over. Now Orville was fighting only for economic endurance and, above all, for their place in history. The leading technical-scientific institution in the USA, the Smithsonian, did not recognise the Wrights as the first powered aviators at that time. Instead, it promoted their former secretary Samuel Pierpont Langley, who had made attempts with his "Aerodrome" in 1903, as the first powered aviator.

It was not until 1942 that the Smithsonian revised its stance. The background to this was that Orville had indicated that he would leave the original Kitty Hawk glider to the museum (today the

National Air and Space Museum). In 1928, he had temporarily given the historic glider to the London Science Museum out of annoyance with the Smithsonian. But Orville set conditions: The Smithsonian had to commit forever to the fact that the Wrights had succeeded in the first controlled powered flight in history with this Flyer (see a recent

statement from the museum).

Not surprisingly, some researchers see this "gagging agreement" as a major reason for ignoring other possible candidates for the first powered flight, especially Gustav Weisskopf (Whitehead), who may have flown two years before the Wrights.

Age of the pioneers 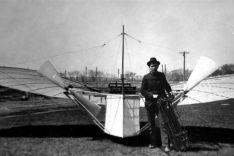 It is possible that he was the first powered pilot: Gustave Whitehead and his "No. 21".

During Orville's lifetime (he died in 1948), the status of the Wrights was by no means undisputed. Weißkopf's attempts were researched and publicised by journalists in the 1930s, while the Wrights' evidence was critically questioned. And there were other aviation pioneers who may have succeeded in short motorised air hoppers before the Wrights, for example Richard Pearse in New Zealand, Clement Ader in France or Karl Jatho in Hanover.

But whatever the case may have been, it was Orville and Wilbur Wright, with their innovations, business acumen and property rights policy, who decisively shaped the beginning of the history of aviation.