The day of the Bollerwagen (handcart) is approaching. No, it is not one of the many more or less meaningful „world days“ that fill the calendar. But Ascension Day is Father's Day, and Father's Day is Bollerwagen Day. Up and down the country, joyful men will once again be dragging handcarts around. In them they will transport beer and schnapps, and maybe a grill (and sometimes drunken fathers on the way back).

For centuries the handcart was the most important means of transport for all those who could not afford draught animals. The handcart was used for everything: grain, tools, building materials... In our country, the handcart was an irreplaceable means of transport during the refugee treks at the end of the Second World War and during reconstruction afterwards. After that, it was replaced by lorries (except, of course, on Father's Day or during "cabbage and sausage" rides in Northern Germany). Only since the parents in the country have (re)discovered the light-weight, foldable or collapsible handcart as a means of fun transport for their children thanks to new developments, the vehicle has experienced a small renaissance.

From work tool to lifestyle product 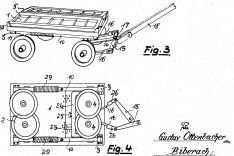 DE22730A). In the middle of the reconstruction years a utility model for a "collapsible hand ladder trolley" was applied for at the only just re-established German Patent Office (

DE1614732U).But it were developments such as the "Foldable hand truck with safety brake function" (2018) that finally transformed the handcart from a work tool into a lifestyle product (

The handcart is probably almost as old as the wheel, and this was invented around the 4th millennium BC. Its original form has hardly changed until well into the 20th century: The classic handcart is practically a miniature version of the traditional farm wagon. The most important difference in the construction is the drawbar, which in the case of the handcart consists only of a rod with a cross handle. It is used to pull, push and steer the cart.

In for a rough ride 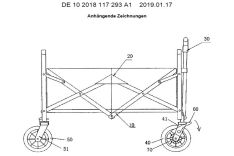 The handcart is traditionally made of wood, has ladder-shaped side walls and no suspension. The wheels, which were once simply discs, usually have thick wooden spokes and metal-covered treads.
The most important feature of the handcart has always been its robustness, which allowed it to master even the bulkiest paths. To make it even more solid, for example, a ladder trolley with metal parts was registered for patent in 1932 (

Today, most of the Boller Wagons and their „relatives“ come from China. German suppliers largely concentrate on premium or professional carts for commercial use.

From the pious procession to a booze cruise 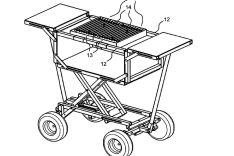 Where does the handcart custom at Father´s Day actually come from? It is comparatively young: Ascension Day has been celebrated as a church holiday since the 4th century, but as "Father's Day" only since the late 19th century. The idea originated in the USA, where the older Mother's Day was to be given a male equivalent. Ascension Day always takes place 39 days after Easter Sunday, therefore it is always a Thursday and in Germany it has only been a public holiday since 1934.

But the Father's Day customs have much older roots. Their origins probably lie in the medieval "Flurprozessionen", in which the faithful walked across the fields on Ascension Day. In the 19th century the tradition of the gentlemen's excursion developed. Men rode from inn to inn in festive costume in carriages decorated with lilac or birch branches. The free leisure time on Father's Day was a hard-won commodity, especially for the workers, and was celebrated accordingly.

And what does the handcart have to do with it? It was the carriage of the "little man", so to speak. Those who could not afford a horse-drawn carriage were just going through the community with a handcart. Later, the fathers who enjoyed celebrating transported their drinks alternatively with handcarts or wheelbarrows, bicycle trailers or tractors.

New ideas for an ancient vehicle 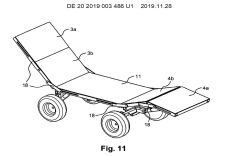 Since the handcart has largely lost its original function in the "rich" countries, inventors have begun to tinker with its optimization. The handcart has therefore changed for the first time in its long history, in some cases significantly, over the past decades. Some modern handcarts are already comparatively complex in technical terms.

The large turning circle is usually a problem with traditional handcarts.

DE10139357B4) is a simple, heavy construction, but can be folded so flat that it fits into the boot of any family carriage, even next to thick diaper boxes, beach toys and bathing suits. 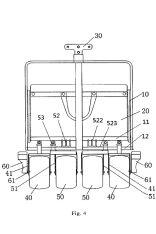 DE202008009410U1 is a real milestone of the modern family handcart: light aluminium frame, textile transport tray and foldable with a few hand movements. Virtually indispensable for every family holiday at the beach!

DE202017000021U1 ("handcart with integrated bar table and parasol") are especially suitable for the Father's Day trip.

But whether traditional or modern - all handcarts are driving licence-free. And that makes them the ideal companion for Father's Day outings. After all, according to the Deutsche Verkehrswacht, there are more alcohol-related accidents on Ascension Day than on any other day of the year.