On 12 September, the German Patent and Trade Mark Office - IDZ Berlin will participate in the Germany-wide Open Monument Day. The office building at the capital's location can look back on a long and varied history, although the definition of the term "long", especially in connection with buildings, is of course relative.

From 1903 to 1905, the building in Berlin-Kreuzberg on Gitschiner Straße was erected especially for the purpose of industrial property protection; it was the fifth domicile after the founding of the office on 1 July 1877 in Berlin. For a long time it was regarded as the largest building in the city until it lost this rank to the main building of the nearby Tempelhof airport. However, while the latter is now called the "former reception building", the DPMA is still active in Berlin with its Information and Service Centre.

When, from 1895 onwards, the Imperial Patent Office was looking for an appropriately large and representative office in the capital Berlin, the choice fell on the site of a barracks on the southern edge of the former city area. The Berlin architects Solf & Wichards were commissioned by the Prussian State to construct a representative and functional building which would also accommodate the expected growth and offer expansion potential. At the beginning of the 20th century, the German economy was booming and every year more and more patents, trademarks and design patents (as the designs were called at the time) were applied for - especially by Berlin companies; the effort and staffing level of the office therefore increased continuously. 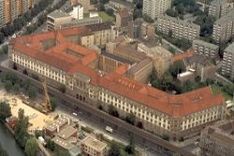 In order to create a pleasant and productive working environment for the examiners, a four-winged basic structure with long corridors illuminated by daylight was created. A total of 700 service rooms were created on five floors; the mix of materials and styles comprises building and decorative elements from all areas of the emerging empire in an architecturally remarkable composition.

In addition, extensive possibilities had to be created to store patent literature and writings and to make them available quickly if required. The office's library was at the time the largest technical library in the imperial capital.

This development continued until the Second World War, although there were already deep cracks in the lacquer due to the expulsion of all Jewish employees from 1933 onwards. The bomb attacks on Berlin also had serious consequences for the office: As the largest building on the southern edge of Berlin's inner city, it served as a landmark for the bomber units and suffered severe bombing and fire damage.

Reconstruction in the 1960s 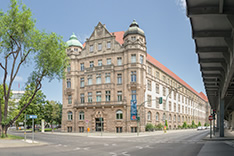 During the reconstruction, which was started in the 1960s, many design elements of the outer facade and the roof were not reconstructed - in keeping with the historically displacing style of the time. The fight against "stucco and flourish" at that time was very successful here. However, the interior of the building was preserved and restored. And so you can indulge in Wilhelmine neo-gothic in the stairwells and indulge in Renaissance vaults in the foyer - all in one building.