Actually, it's a rather tricky matter: Santa Claus, Saint Nicholas, Heiliger Nikolaus, Sinterclaas, Père Noël, Weihnachtsmann, Joulupukki - who actually is it who brings us presents? And when? About the metamorphoses of a legendary figure - and the intellectual property rights around it.

In early Christian times there was a bishop in Myra (today Demre, Turkey) called Nicholas. Probably even several of them, which later on were merged into a single saint by tradition. St. Nicholas is one of the most important saints of the Catholic and especially the Orthodox Church; he is the patron saint of the Russians. Almost nothing is known about the historical Bishop Nicholas, except that he probably lived sometime between 270 and 365 and most probably died on a December 6. 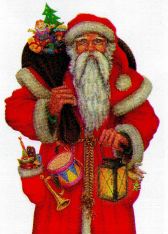 As befits a saint, various miracles and good deeds are attributed to Nicholas. For example, he is said to have blessed three poor virgins with a lump of gold each at night and thus saved them from slipping into the slippery slope (St. Nicholas is also the patron saint of prostitutes). This is the origin of the Christian tradition that St. Nicholas brings his gifts overnight.

In joyful anticipation, therefore, containers are set up on the eve of St. Nicholas' Day for the gifts. Once these were paper boats, because St. Nicholas is also the patron saint of sailors, since he is said to have saved three sailors from a storm. The St. Nicholas boat was later replaced by shoes or stockings, which children put in front of the door or hang on the fireplace mantelpiece. At night the saint then filled them with "apple, nut and almond kernel" or other good gifts. 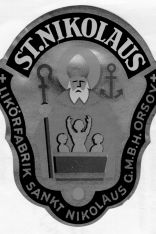 Originally, St. Nicholas' Day on 6th December was the day of the big presents, not Christmas. In some countries this is still the case. In the age of the Reformation, however, this changed in many places: Martin Luther was suspicious of the veneration of saints; he put Christ in the center and the giving of presents shifted to Christmas Eve. In time, this developed into the idea of a „Christkind“ bringing the gifts. 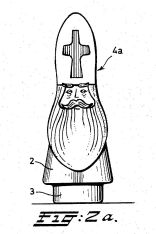 But St. Nicholas made a comeback in the 19th century - mutated into Santa Claus. The song "Morgen kommt der Weihnachtsmann", written in 1835 by Hoffmann von Fallersleben, made him especially popular in Germany.

Today we imagine Santa Claus as an overweight older man with a red suit, white beard and a pointed cap. This has little to do with the bishop's costume of St. Nicholas with crozier and mitre. Where does that come from? In short, it is the American in Santa Claus. The tradition of Santa Claus came in the person of the Dutch "Sinterklaas" to "New Amsterdam", which is today's New York. The "Sinterklaas" and "Saint Nicholas" became the anglicised "Santa Claus". In the Anglo-American world, the giving of presents does not take place on Christmas Eve, but on the morning of Christmas Day, because Santa Claus brings the presents during the night.

How "Santa Claus" was defined 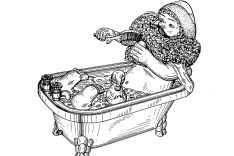 The anonymous American poem "'Twas the Night before Christmas" ("A Visit from St. Nicholas") from 1823, which today is mostly attributed to Clement C. Moore, was a formative influence on the presentation of his appearance. Here "St. Nick" is described as a "jolly old elf" with round cheeks and a right jolly old belly ("He was chubby and plump, a right jolly old elf"), a red nose, long white beard and a pipe. Also his sled with eight named reindeers appears here for the first time. 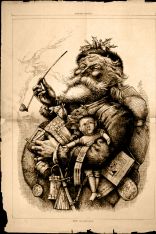 "Santa's" description in this enormously popular poem was translated by the German-born caricaturist Thomas Nast (1840-1902) into drawings that first appeared in the Christmas issue of the magazine "Harper's Weekly" of 1862. In the following years, Nast, who is considered the father of political caricature in America, returned to the subject time and again. He created the Santa Claus image that is predominant today.

It is often claimed that the modern Santa Claus is actually an invention of a lemonade maker. In fact, the advertising campaigns of the Coca-Cola Company with the red-dressed, chubby-cheeked "Santa" from 1931 onwards did much to spread his image - smoothed and standardized - around the world. The company holds the rights to a corresponding picture trademark (EM002996502, registered in 2003). 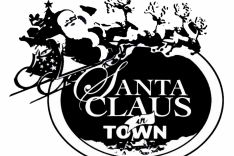 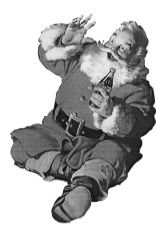 As "Official Partner of Santa Claus" a coffee roaster presents itself by means of an appropriate word mark (DE306573474). "Santa Claus in town“ was registered by a German supermarket chain as word/figurative mark (DE3020120073719).
A chocolate manufacturer has registered a word/picture trademark with its logo and the slogan "We believe in Santa Claus"(DE3020170130635).
Even his facial hair is apparently interesting in terms of IP protection: There is the word mark "Weihnachtsmann Bart (Santa Claus Beard)"(DE3020172143203)- for cotton candy (Nice class 30). However, the application for "Santa Claus" as a word mark was rejected in 2000 (AZ300236883/DE).
On the other hand, the word-picture mark "Nikolaus von Myra" (DE3020161089318), which the Catholic Youth Welfare Service of the Diocese of Augsburg has registered, refers to the roots of the saint; in addition, a further picture mark "St. Nikolaus", which it has registered for relevant Nice classes (41, 43, 45)(DE302016111131).

Where does Santa Claus live? 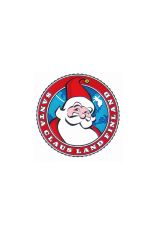 He drives a reindeer sleigh and comes through the chimney, that much is known. But where does Santa Claus actually live? In the Anglo-American cultural circle it is common sense that Santa Claus lives at the North Pole (by the way, this also goes back to Nast). In Scandinavia, opinions are divided: Swedes locate his home in Dalarna, Danes in Greenland.

Alternative facts: According to some Finnish children's books, Santa Claus lives in the mountain Korvatunturi.

Is Santa Claus a Finn? 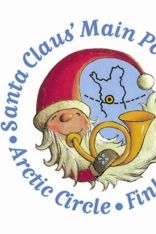 And of course Santa also has his office in Finland: "Santa Claus' Office Arctic Circle Finland" was registered by the company Lapland Safaris as word/figurative mark EM017558529. Even for his reindeer the Finns secured themselves a brand (EM017966227).

In order to distinguish themselves from any other "official" Santas, there is also the word-picture mark "The official Santa Claus of the Arctic Circle" (EM014557731).

Living in the kingdom of heaven

In competition to it there is also a German brand "Dorf vom Weihnachtsmann (village of Santa Claus" (DE3020140221012). But were ist located? Is it at Himmelreich (Kingdom of Heaven) near Hannover? Or Himmelreich near Höllental in the Black Forest? Himmelstadt near Würzburg? Himmelpfort in Brandenburg, north of Berlin? Himmelpforten near Stade? If you put one of these addresses on your letter to Santa Claus, you have a good chance of getting a reply- thanks to the local Christmas post offices... Alternatively, you can write to the Christkind at Christkindl post office, a district of Steyr in Austria.

Santa and the inventors 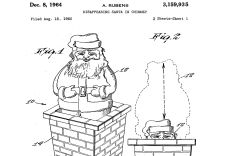 Santa Claus is also a source of inspiration for inventors: Every year, there is an abundance of new designs and developments around the lucrative Christmas marketing. A few examples, right through the years:

A toy monorail, which is attached to the trunk, lets Santa's sleigh whizz halfway around the Christmas tree (

US5743781 from 1996: "Ornamental toy capable of running up and down" features a Santa Claus figure climbing up and down on a string.
"Animated display device" from 1956 turns Santa and his sleigh and reindeer into high-wire artists: Gearwheeled, the team whizzes along on a wide-spun line ( 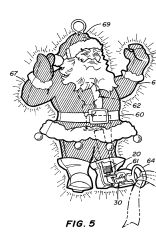 "Disappearing Santa in chimney" from 1960 is a smart decoration idea: Santa Claus emerges from the chimney by means of a sliding mechanism and disappears back into it (

A bell ringing Santa Claus was applied for as a patent in 1950: "Electrically operated bell ringing decorative device" (

US6210250B1 follows a similar idea: In this 1999 application, the bells are missing, but there is music and a moving Santa Claus: "Musical ornament having concealable and movable figurine" - a small Christmas tree opens, Santa Claus appears and spins around, seasonal music plays along - actually a classical carillon, only the music comes from the tape. 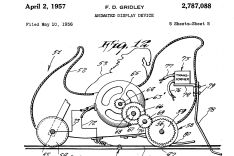 A patent application for a "Santa Claus Detector" was filed in 1994: It is supposed to report when Santa Claus comes climbing through the chimney. The stockings, which the children have hung on the chimney in joyful anticipation, then start to glow (

In addition, a kit to simulate a nocturnal visit by Santa Claus was registered in 2005 (

US2006/0116049A1): The children find (besides gifts) a handwritten greeting card, the hoof print of a reindeer or Santa's sled driver's license. 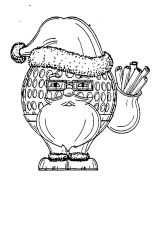 In addition to the numerous technical devices for entertainment purposes, there is a wealth of seasonal decorative items, some of which have been registered as designs.

In the course of time, a large number of design patents have been registered in the USA: Santa in Golf ball look ( 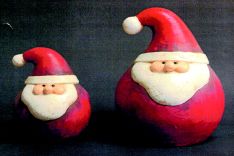 There are covers for hollow chocolate figures in Santa look(

US3821423A) or hair ornaments with Santa face, where the hair plait then forms Santa's beard; a nice optical gag (

So the bishop from Myra has undergone many metamorphoses over the years. But whether St. Nicholas, Santa Claus, Weihnachtsmann, Joulupukki or the Christkind brings the presents - and whether this takes place on December 6th or 24th - the important thing is that there is a healthy, peaceful family celebration - especially in this wicked second pandemic winter!