How does the Easter Bunny lay his eggs?

One of the last big questions of mankind is: How does the Easter Bunny actually manage to lay eggs? Generations of biologists, ethnologists and children have racked their brains over this. And why are his eggs coloured? Recent research suggests that findings in the patent database of the DPMA, DEPATISnet, may lead to the solution of the mystery.

A rabbit that lays eggs - how does that work? After all, Leporidae are mammals, and they lay eggs only occasionally and only in Australia. Theodor Voss from Magdeburg was one of the first to discover the secret of egg laying in 1894. He was granted a patent for "a toy in the form of an egg-laying animal, which, like the Easter Bunny, has become popularly known for its mysterious egg laying" (

DE78395, 2.3.1894). According to Voss, however, the Easter Bunny only lays its eggs with the magic word: "Patent claim: An artificial body in which a channel provided with blocking devices is installed in such a way that the same can be exposed from the outside according to a keyword or a number in order to allow the balls, eggs or coins in the channel to exit".

A belly full of eggs? 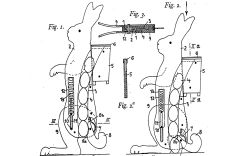 Johann Gotthilf Dietrich from Berlin discovered in 1919 that the Easter Bunny carries many eggs inside and lays them when moved: "The invention refers to a sitting Easter Bunny whose body is designed as a magazine for Easter eggs or dummies (...) so that each time the body is moved, a piece of the egg supply contained in the magazine falls out downwards. This device imitates the process of laying eggs in a funny way with inconspicuous technical means" (

Eggs by the conveyor belt 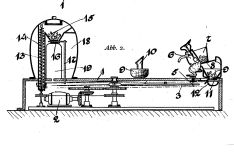 Doesn't the Easter Bunny get dizzy when he is always running in circles? The laying of eggs seems to distract him sufficiently: "The Easter Bunny passes a number of nests into which eggs are released by automatically opening a bottom flap. The eggs then run back to a collection point, from which the eggs fall back into the figure when the figure passes this point" (

The decisive factor is what comes out at the back 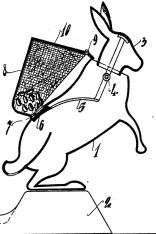 So does the rabbit automatically lay eggs as soon as it passes a nest? A kind of Pavlovian reflex? According to Paul Sommerfeld from Wismar, the Easter Bunny has to be pressed on the head first. Because "there is a lid attached to it, which usually closes an opening in the back of the body. The opening is connected to a pannier on the back of the animal's body to hold the eggs, sweets and the like. If, for example, the movable head is pushed back, the said lid is also opened, so that the sweets in the pannier fall out through the back of the Body ( 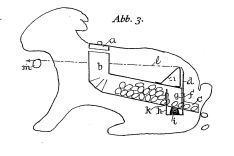 Also Albert Osterberg from Kassel observed in 1924 that the Easter bunny has to be stimulated manually to lay eggs: He described an "egg-laying animal figure", in which "by means of a manually operated closing device of a refillable container arranged in a dummy, the contents of the container are sucked off in portions, characterised in that the closing device consists of two parallel slides, which determine the respective quantity of the container contents that falls out by their mutual distance" (

The complex process of egg laying 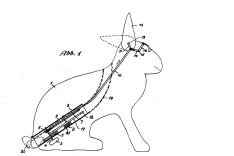 The Easter Bunny can wiggle its ears while laying eggs, Gottfried Sachs from Oberhöchstadt found out in 1925:

DE441794describes an "egg-laying Easter Bunny, in whose hollow body is arranged an engine set in motion by spring force, which simultaneously causes the release of the eggs and the movement of limbs of the bunny figure": The interplay of the spring axle, pinion, cam disc and lever makes it possible "to move the eyelids of the rabbit, while an egg pushing disc sitting on the axle of the cam disc simultaneously allows an egg to slide down into the tube, which is released into the open air by lifting the pendulously suspended tail" (31.12.1925). The Easter bunny - a robot?

Do not jump when laying eggs! 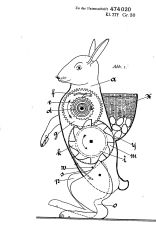 DE474020(2.2.1929), "but the eggs can easily be damaged during the jumping movements. According to the invention, the mechanism built into the rabbit is now designed in such a way that the hind legs of the rabbit perform a walking movement instead of a jumping movement, and that in the process the eggs are guided individually from the storage container to the discharge opening by a rotating drum".

Jumping and laying eggs at the same time - that might not go well, not even with the Easter bunny.

How many eggs fit into the Easter Bunny? 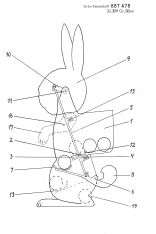 But once the rabbit starts laying eggs, there is no stopping it until everything is out:

DE887478 mentions an "egg-laying Easter Bunny, inside which the eggs coming out of the storage container pass through a mechanism actuated by their weight after a single initial movement and then leave the body of the Easter Bunny at certain intervals".

"This Easter Bunny," as Hans Goger from Ellerstadt in the Palatinate further described it, "has the advantage over other Easter Bunnies that it lays eggs after a single initial movement, without any further external influence, and without the need for an engine, until the storage container is empty.“

And how do you get the Easter Bunny to lay eggs? Quite simply: "If you now lift the Easter Bunny's tail up, the downward-stepping pivot point pulls the rear part of the rocker downwards, causing the rocker, pivoting around its pivot point, to turn its open side backwards in such a way that an egg from the slightly higher storage container can roll into the rocker". The Easter Bunny also waggles its front paws (3.6.1951). A gifted beast! 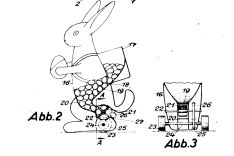 Sometimes, however, the Easter Bunny is trivialized as a toy: In 1948 Fritz Kühne from Hamburg wanted to "increase the play characteristics of the figures so that they can serve as general children's toys more effectively than before". Again, the eggs are stored inside the rabbit body; the exit opening is released by a cellular wheel which transports the eggs outside. "The Easter Bunny or another corresponding animal can therefore be used in this training as a toy in the sense of the well-known mobile animal figures made of wood, fabric etc., whereby the bunny or a chicken etc. drops an egg from time to time while driving, provided that the animal body has previously been filled with eggs". (

And why are the eggs colourful? 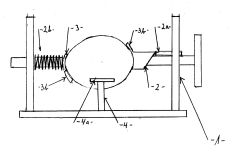 But how does the Easter Bunny paint his eggs? Perhaps with a device as described in

DE7630206U , which "even manually untalented people (which should apply to the Easter Bunny and his thumbless paws, editor) can achieve a wealth of surprising decorative images on eggs. The device with an eccentric holder for the egg body has a rotating arm with an undulating conical section and movable brush support“.

DE8402800U1, namely with a fixed rotary spindle bearing with drive pin and a rotary spindle with pressure spring, which should be particularly suitable for decorating eggs in batik technique.

If the Easter Bunny does not want to hand-paint the eggs but prefers to decorate them with heat-shrinkable labels or stickers, a procedure as described in 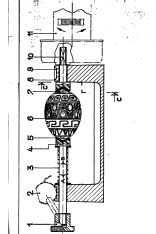 All these described Easter bunnies have in common that they should probably only lay hard boiled eggs to avoid sticking in their own egg-mud. Normally the Easter Bunny must therefore first boil his eggs and then dye them. To save him time,

DE2209635A suggestes to do both in one step, i.e. a procedure to boil and colour the eggs at the same time.

If the Easter Bunny wants to blow out the eggs, a device as described in

Dear animal lovers, today we have come a little closer to an old mystery of nature again. There seems to be more to the Easter Bunny than meets the eye. If you want to know more, you can contact the Easter Bunny directly by post: send a letter to one of the three German Easter Bunny post offices in