Is there a patent medicine for love?

Valentine's Day on 14 February is commonly known as the day for lovers. Many show their affection for their better halves with chocolate, flowers and other small and large gifts. Speaking of love: What about love and trade marks? Or to put the question differently: Can love be protected as a trade mark? Or is there even a formula for love?

Can “Valentine” be protected as a trade mark?

In its statement of reasons, the court argues that there is a growing tendency in the confectionery trade to use events or “holidays”, such as Mother’s Day or, in particular, Valentine’s Day, to increase the sales of goods by launching appropriate advertising campaigns. Thus, the name “Valentine” is often combined with terms for confectionery products to form chatchphrases like “Valentine’s dessert”, “Valentine’s cake”, “Valentine’s heart”, “Valentine’s chocolates”, “Valentine’s biscuits” and used as a synonym for or in connection with the relevant goods specifically offered for sale as Valentine’s Day gifts. Therefore, consumers would understand the term as a factual information and would not think of a specific producer.

The Federal Patent Court held that this also applied to “chocolate in the shape of an egg”: For, on the one hand, the possibilities for designing a “Valentine’s gift” were not limited to the heart as a shape for goods, while on the other hand, the shape of the egg, as a symbol of fertility, was not without any connection to Valentine’s Day.

From “made with love” to “hand on heart”

The same is true for the advertising slogans “Mit Liebe gemacht” (made with love) and “Liebt Euch günstiger” (love one another cheaper); they cannot be protected as trade marks. After all, they do not make consumers think of a particular company.

According to the Federal Patent Court, the word sequence “Mit Liebe gemacht” (made with love) was not capable of indicating the commercial origin of the goods claimed with respect to the goods “preserved, dried and cooked fruit and vegetables; jellies, jams, compotes, desserts made of fruit and thickeners, red fruit jelly, preserved ready meals consisting essentially of meat, fish, vegetables, fruit, eggs, cheese, yoghurt, curd cheese, rice, pasta, pudding, pastries, dumplings ...”. In commonly known phrases such as “cooking with love”, “setting the table with love” or “made with love”, the word “love” meant “with great care and inner dedication”. However, the relevant consumers would perceive the word sequence, for which an application was filed, only as a promotional descriptive slogan specifying the quality of the goods, namely that they were manufactured or produced “with great care and inner dedication” (see Federal Patent Court, Munich, decision of 9 December 2010, 25 W (pat) 537/10 –, juris).

Nor would the slogan “Liebt Euch günstiger” (love one another cheaper) make consumers think of a particular company, but would be easily understood as a mere advertising statement, namely that it was an offer of low-priced goods and/or services relating to the topic of love in all its facets, i.e. not limited to sexual love. Therefore, the court argued, the relevant public did not have to make a minimum effort to interpret the slogan, nor did the slogan show any originality or succinctness (Federal Patent Court, Munich, decision of 19 October 2011 – 29 W (pat) 550/10 –, juris).

By contrast, the Federal Patent Court took a different view on the phrase “Hand aufs Herz” (hand on heart) and stated that it was comparable to an advertising slogan and had no descriptive meaning with respect to the goods and services claimed in the classes 3, 9, 14, 16, 18, 25, 28, 35, 38, 41, 42 and 45. The phrase was short and succinct, stood out from longer word sequences and was particularly catchy due to the simple, common statement (Federal Patent Court, Munich, decision of 11 July 2012 – 26 W (pat) 41/12 –,juris).

There are hearts and hearts

So, under certain circumstances, it is possible to apply for a trade mark for the phrase “hand on heart”. But what about the heart as a figurative mark? Again, what is true in many cases is also true here: It all depends. 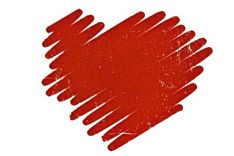 For example, the Federal Patent Court considered a “heart shape hatched in red” to be just about distinctive. It argued that the shape of a heart was a sign frequently encountered in everyday life and in particular in advertising. Especially in combination with a preceding “I” or “we” and followed by a noun, the heart had become a common symbol for “love” (“I love”, “we love” – we [love] fruit; – I love Germany; JESUS [heart] YOU). It described a close relationship or a particular affection for the object mentioned after the heart (for example, a city, “I love NY”, “I love Munich”, “I love Paris”) or for goods/services (e.g. “I love doner”, “We love pizza”, “We love IT!”, “We love web design”, “We love what we do”, “We love cosmetics”). The court argued that, consequently, such combinations would generally be perceived as a descriptive and promotional statement in the relevant factual context.

According to the court, the matter was different in the case of the “heart shape hatched in red”. The figurative sign had no objective connection with the goods and services claimed in the classes 9, 16, 18, 21, 24, 25, 30, 32, 35, 38, 41 and 42. The graphic design resulted in a highly abstract representation, which gave the heart a sufficiently individualising characteristic so that it was capable of indicating the origin. Consequently, the figurative sign still had the minimum degree of distinctiveness required. The court also held that there was no need to keep the sign available for use by other companies because it was not suitable for description (Federal Patent Court, Munich, decision of 16 January 2018 – 29 W (pat) 541/17 –, juris). 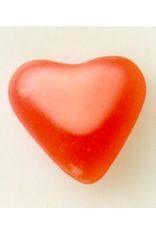 The situation is different, however, if trade mark protection is sought only for the shape of the goods as such. In this context, heart-shaped confectionery in particular is not uncommon and consequently cannot be registered as a three-dimensional trade mark (see the Federal Patent Court, Munich, decision of 3 November 2004 – 32 W (pat) 281/03 –, juris). The Federal Patent Court stated: “The three-dimensional mark applied for in respect of goods in the confectionery sector (red heart with a white filling showing through in the centre) is not distinctive because it is often found in the confectionery sector as a basic aesthetic shape. The protectability of a shape mark for goods must, as a rule, result from the distinctiveness of the outer shape itself; if it is not distinctive – as in the present case – distinctiveness cannot be conferred by a particular colouring and/or a specific characteristic or composition of the material used. For a basic shape such as the heart, which is widely used in the confectionery sector, there is also a need to keep it available in every conceivable colour for use by others.” 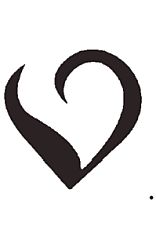 Recently, the Court of Justice of the European Union (CJEU) has also dealt with the heart (decision stylised heart, CJEU of 14 February 2019 (T-123/18)). The applicant applied for the registration of a European Union trade mark for a sign representing a heart for services in the classes 42 and 44 in the field of cardiovascular diseases. Among other things, the claimant argued that the high level of attention of the relevant public had to be taken into account. The trade mark applied for would not be perceived as the representation of a heart, but as the letter “v” of the word “vericiguat” (name of a medicinal product).

The CJEU dismissed the action. According to the Court, the relevant public specialised in the field of cardiovascular diseases would perceive the trade mark as a representation of a heart and not of the letter “v”, despite having knowledge of the medicinal product. The trade mark would only be perceived as an indication that the services related to the heart and therefore it was not capable of indicating the commercial origin; it was devoid of any distinctive character.

No formula for love

Finally, for those of you who expect a “formula for love” here, you may be in for some disappointment. Because, unsurprisingly, this formula cannot be found even in the case law concerning trade marks. In the case at hand, a television broadcaster wanted to apply for the registration of a trade mark for the work title “Kein Rezept für die Liebe” (no formula for love).

The Federal Patent Court ruled as follows: “Word sequences... which accurately and exhaustively describe the obvious content of a work must be kept available for the use by others with regard to services directed at the creation or exploitation of the work (here: production and broadcasting of a television programme). If their descriptive content is readily understandable to the relevant domestic public, they are also devoid of any distinctive character for the services in question,” Federal Patent Court, Munich, decision of 7 May 1997 – 29 W (pat) 119/96 –, juris. Well, so much for love.