Mobility of the future - Made in Germany

Why is autonomous driving one of the most important technological trends of recent years? What are the hopes associated with this? Current facts and figures on this topic were presented by Günther Schmitz, Vice President of the DPMA, at a lecture at the DPMA User Forum 2018.

The number of national patent applications (and PCT applications in the national phase) relating to autonomous driving has increased steadily since 2010 and has more than doubled since then. The vast majority of these applications come from the field of assistance systems for drive control.

Autonomous driving means the independent, purposeful driving of a motor vehicle on the road without the intervention of a person driving the vehicle. With the aid of various sensors, the vehicle can perceive its environment and determine its own position as well as the position of other road users on the basis of the information obtained. The reaction of the vehicle then takes place via algorithms and associated actions - without the influence of a person.

Approximately half of the applications come from car manufacturers and about one third from suppliers. Bosch was by far the most frequent applicant in the last seven years. Audi in second place only applied for about half as many patents in this period, followed by Continental, Ford, GM, BMW, Toyota and VW. It's remarkable that Google is in tenth place - just a thin sheet behind Daimler.

Günther Schmitz cited important reasons why the economy and the state should rely on autonomous driving:

There are different levels of driving automation, which Schmitz explained in his presentation:

Level 1 is a vehicle in which the driver is travelling alone without any auxiliary systems. If the driver is provided with an assistance system that temporarily relieves him or her of the longitudinal or transverse guidance of the vehicle, this is referred to as assisted driving (level 2).

In the case of semi-automated driving (level 3), as is already common practice in road traffic today, the driver must constantly monitor the supporting assistance systems, such as the lane keeping assistant, and continue to actively participate in driving. The system takes over the guidance only for a certain time or a certain situation (traffic jam, parking etc.).

In the case of highly automated driving (level 4), the person driving the vehicle is to be relieved even further. The system or the vehicle acts largely independently, but warns in good time if it can no longer react and the driver has to intervene. The driver does not have to monitor the system permanently.

In contrast, fully automated or autonomous driving (level 5) corresponds to the extensive understanding of an autopilot. The driver does not have to monitor the system and could theoretically also sit in the back seat. 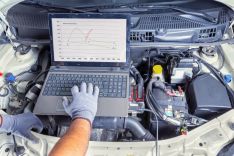 Many of the world's major car manufacturers have been investing in the development of autonomous vehicles for some years now, as the number of patent applications shows impressively. The performance of the sensors and the data processing in the ECUs is constantly improved. Some manufacturers have announced plans to launch fully autonomous vehicles on the market by 2021.

A core theme is cross-linking: "car-to-car" communication connects vehicles in traffic. “Car-to-infrastructure” includes external facilities such as traffic lights, traffic guidance systems and monitoring systems in the data exchange. Together, these two factors are intended to considerably improve the flow of traffic, because networked cars can automatically move much more evenly than those driven by individuals, often with considerable differences in attention, temperament, knowledge of the place or driving ability.

Improved traffic flow is an important argument for automated driving, which Schmitz substantiated with frightening figures: The number of traffic jams on German highways has more than tripled since 2010! For example, commuters in Stuttgart lose 84 hours of their lives in traffic jams every year.

Compared to stop-and-go traffic, automated driving also saves a lot of fuel, which benefits the environment.

The number of road deaths has been declining for years, mainly due to technical improvements. Many available driving safety and driver assistance systems, such as ABS (anti-lock braking system), ESP (Electronic Stability Program) or Adaptive Cruise Control (ACC) are valuable helpers and have achieved a high level of acceptance as road traffic supporters. They provide stability in critical situations or automatically keep a distance to the vehicle ahead.

This foresighted driving is another core issue: driver assistance systems must be able to scan the environment in all directions. They receive data and information from different sensors such as radar, cameras or ultrasound to obtain a complete picture of the environment in real time.

A number of new patent applications are dedicated to improving the driver-vehicle interface: the assistance systems can take countermeasures in the event of decreasing attention, fatigue or health problems. Currently, 90 percent of all road accidents are due to human error. So how many accidents could be avoided in the future!
In the future, assistance systems will be able to analyse driving behaviour in order to create a driver profile and adjust the driving behaviour of the autonomous car to its intentions. The analysis of movement patterns will allow predicting the behaviour of other road users, which is particularly important for the protection of pedestrians.

Another core issue is fail-safe operation: a vehicle that constantly checks its functionality itself and takes independent measures to avoid errors and failures considerably improves its own safety.

According to Schmitz, a survey shows that 27 percent of respondents are not yet willing to surrender control of their vehicle under any circumstances. However, there is already a high level of acceptance for parking systems and autopilots in traffic jams on the motorway. The willingness to hand over the complete control of road traffic to the autopilots is still very low among the respondents. But this will certainly change very soon, given the rapid pace of technological development.