Richard Willstätter was one of the many brilliant scientists who were chased out of their homeland during the times of National Socialist barbarism. Nobel laureate, multiple honorary doctorate, member of international scientific societies of distinction - but because he was constantly attacked as a Jew, he gave up his chair at Munich university as early as 1924. In 1938 he fled to Switzerland.

Perhaps science in Germany, especially chemistry, never fully recovered from the "brain drain" brought about by the expulsion of the best German natural scientists in the 1930s. More than twenty Nobel Prize winners had to flee; Albert Einstein and Lise Meitner are probably the best known among the exiles.

Richard Martin Willstätter was born 150 years ago, on 13 August 1872, in Karlsruhe. He spent his childhood and early school years there, and the rest of his school years in Nuremberg. In 1890 he began studying chemistry in Munich at the institute of Adolf von Baeyer, who was to receive the Nobel Prize in 1905. Willstätter stayed there for 15 years. After submitting his habilitation thesis "Untersuchungen in der Tropingruppe" in 1896, he became a lecturer and finally an associate professor.

His first patent applications, such as "Tropyne ketones and process of making the same" (

US628293A, 1897), also date from this time. He was mainly concerned with the structure and synthesis of plant alkaloids such as atropine and cocaine, later with quinone and quinone-like compounds and the study of plant and animal pigments. In 1905, he followed a call to Zurich and became a professor at the ETH Zurich. 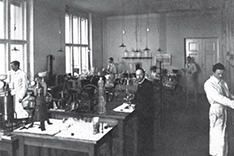 The seven years in Switzerland were scientifically extremely productive, but in 1912 he went to Berlin to the new Kaiser Wilhelm Institute for Chemistry. During the First World War, the institute was pressed into war-related work. Willstätter developed a gas mask filter and received the "Iron Cross" for it. Among other things, the patent for a "process for the production of solutions from cellulose" (

But above all, he was able to complete his research on chlorophyll here with his co-workers, and in this context also finish some work on haemoglobin and carry out studies on anthocyanins, the pigments of flowers and fruits. Especially for his work on chlorophyll, he was awarded the Nobel Prize in Chemistry in 1915 (but the ceremony did not take place until after the war in 1920 in Stockholm).

In the same year he decided to return to Munich and take over the chair of his old mentor Adolf von Baeyer. Here Willstätter continued his work of fundamental importance. His investigations into photosynthesis and the nature of enzymes were precursors of modern biochemistry. In addition, he also devoted his attention to problems of theoretical chemistry at an early stage. His work was also reflected in his patent applications, e.g. "Process for obtaining formaldehyde from ethylene" ( 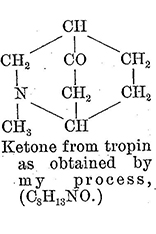 But his academic career ended abruptly and prematurely. Unlike friends and colleagues such as Fritz Haber, Richard Willstätter had always acknowledged his Jewish origins, but believed that matters of faith and religion were purely private matters. After the war, anti-Semitism began to boil up in Munich, enabling and fuelling the rise of the NSDAP. One university personnel issue sparked fierce anti-Semitic protests both inside and outside the university: "No German youth may sit at the feet of a Jewish teacher in the future," ranted right-wing posters. In 1924, Willstätter drew the consequences and set an example: "I humbly ask your Spectability to pass on to the State Ministry for Education and Culture, through the Academic Senate, the request that I be dismissed from the Bavarian Civil Service. .... My decision is final," he wrote to the dean.

Willstätter's resignation caused a great stir in Munich. There were demonstrations of sympathy from students; his colleague Emil Kraepelin said, "He should have stayed and thrown everyone else out." But Willstätter stayed in the city and was active as a private scholar in his house at Möhlstraße 29. And applied for further patents, e.g. "Process for preserving animal and vegetable substances" (

A narrow escape from the concentration camp 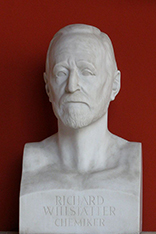 "The downfall of humanity in Germany did not take place until after the end of my professional activity," he later wrote. "If before it had been considered an injustice that, contrary to the constitution, the professors of the Jewish religion were set back in many parts of the civil service, since 1933 it has come about that the German Reich has deprived and destroyed the members of the Jewish race, which, however, does not even exist."

The morning after the November pogrom, on 10 November 1938, the Gestapo appeared at Willstätter's home to take him to Dachau concentration camp. He was not at home. "With the assurance to come back, the officers took their leave. The following three early mornings I sat at my desk from 5 ½ o'clock shivering but ready to receive, but they didn't come, they had had enough." Now it was clear to him, "I had to emigrate and find a refuge for the last years of my life."

Richard Willstätter fled to Switzerland. He had to leave behind almost all his possessions in Munich, including his large library and his Nobel Prize medal.

"I left my beloved German homeland, which had been everything to me, and found 'toleranza per riposo' as an emigrant to Muralto-Locarno, Villa Eremitaggio." There he spent his last years and wrote his autobiography. He died 80 years ago, on 3 August 1942.