Nikola Tesla 1896 in front of a large spiral coil

One of the most important inventors in the field of electrical engineering was Nikola Tesla. For a long time, the influential engineer was half-forgotten. Today, thanks to an electric car company named after him, his name is on everyone's lips again. Nikola Tesla, one of the most enigmatic figures in the history of technology, made a decisive contribution to establishing alternating current as the standard. He filed numerous groundbreaking patents, but some of his technical visions crossed the boundaries into the fantastic.

Nikola Tesla was born in Smiljan on 10 July 1856. Today the town is in Croatia, at that time it belonged to the Austrian Empire. His parents were Serbs. Tesla studied with fluctuating commitment in Graz and Prague, became an employee of the Continental Edison Company in Paris and went to America in 1884. Again he worked for Edison until there was a falling out and Tesla eventually joined Edison's competitor George Westinghouse.

Tesla played a decisive role in the so-called "war of currents" between Thomas Edison, who wanted to make direct current the standard, and Westinghouse, who favoured alternating current. One of his most important inventions, the induction motor with the rotating magnetic field, the first poly-phase synchronous machine(

US381968), was based on alternating current. Westinghouse bought this and other AC patents from him.

Victory in the "war of currents" 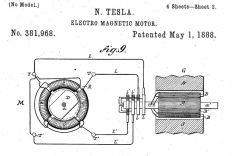 Two milestone projects by Tesla and Westinghouse marked their victory in the "war of currents": the presentation of Tesla induction motors and the AC-powered illumination at the World´s Columbian Exposition in Chicago 1893, and the construction of the hydroelectric power plant at Niagara Falls.

Our everyday electricity supply today is ultimately based in large part on Tesla's patents. The history of radio is also inconceivable without Tesla's insights into wireless energy transmission (Tesla's 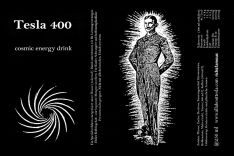 DE mark 302011055762 uses a contemporary depiction of Tesla giving one of his spectacular lectures.

In 1891, he invented the Tesla Coil, a transformer that he also used in lectures for spectacular demonstrations of electricity that made him a celebrity. The transformer allowed him to transmit electrical energy wirelessly inside a room and to make fluorescent lights shine without being connected to a visible circuit (

US454622A). He also made himself into a "figure of light" in demonstrations by using high-frequency alternating currents to make artificially generated elm fires dance on his clothes and hair.

Tesla invented a remote controlled mini-boat that could have served as a weapon of war, mostly floating under the water surface and loaded with explosives. For once, he also applied for a patent for this idea in Germany ("Device for remote control of water vehicles by means of electric waves",

Wireless electricity for all? 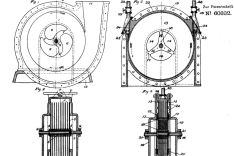 Wireless electricity for all?
"Power machine" (AT60332), later called the Tesla turbine.

In a laboratory in Colorado, he caught lightning and experimented with high voltage and high frequency current. Tesla pursued ideas for wireless lighting and worldwide wireless power distribution. In his Wardenclyffe Tower on Long Island, he tried his hand at an intercontinental wireless communications and power transmitter after the turn of the century. The tower was not only supposed to radio across the Atlantic, but also to distribute electricity wirelessly in the surrounding area (see, among others, "System of transmission of electrical energy",

US725605). But the project ultimately failed because of lack of funding.

From lightning conductor to turbine 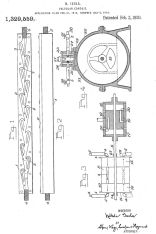 Tesla's main focus was electrical engineering, but he also worked in other fields. His versatile research work was reflected in various patent applications: a way to insulate electrical conductors with the help of ice (

AT9098), a novel "device for the transmission of electrical energy"(

The tireless inventor also worked on X-rays, radar, lighting, robotics and much more (he is said to have slept less than three hours each day!). One of his last patents (1927) was a flying machine that combined elements of a helicopter and an aeroplane, thus anticipating the vertical take-off (

157 patents by Nikola Tesla can be found in the DPMA database DEPATISnet; it is estimated that there were about 300 patents in total, although he did not apply for all of his inventions (here is an external link to an 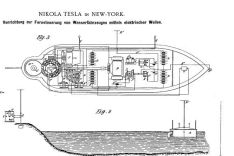 After the First World War, Tesla increasingly drew attention to himself with ideas that sometimes seemed esoteric: he speculated about communication with other planets, claimed to be able to develop a kind of mind camera and a motor powered by cosmic radiation, stated that he could split the earth like an apple and announced that he had invented a "death ray" (more details on a kind of scientific

The latter may have been one reason why all his documents were seized by the US authorities after his death; today they can be viewed online in the 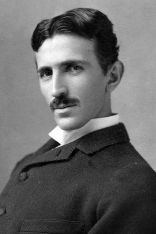 With these and similar foolhardy visions, the ageing Tesla kept getting himself talked about, but the time of his great inventions was over. The eccentric, elegant Tesla never had any interest in entrepreneurship, but nevertheless always lived large in the best New York hotels. If he ran up too many debts, he moved. He lived like this in Manhattan for almost 60 years, and in the end he struggled to resist the creeping oblivion. 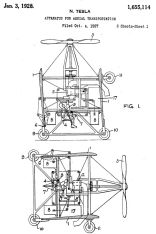 Some of Tesla's ideas were ahead of his time, others simply bizarre. The great inventor was occasionally treated somewhat stepmotherly by the historians of technology, but celebrated as a prophet by esotericists and New Age fans, which could be mainly due to his vision of a "free" energy that is available and transferable at any time.

But his actual, thoroughly epoch-making achievements are increasingly being recognised today: the SI unit for magnetic flux density was named after him. According to the DPMAregister, there are 131 Tesla trademarks, for example for electric companies, energy drinks, seismography, jewellery or lighters. And quite a few regard his induction motor as one of the most important inventions of all time.