The inventor of lithography

Almost every author has difficulties with his publisher at the beginning of his career (if he finds one at all). In the case of Alois Senefelder, this turned into an epoch-making invention. Because the up-and-coming playwright had decided that he preferred to take the typesetting and printing of his plays into his own hands, he invented a new printing process: lithography.

Alois Senefelder, who was born in Prague on 6 November 1771, was the son of a Munich actor. Despite this (or perhaps because of it), his father insisted that he study law. Senefelder immediately abandoned his studies in Ingolstadt when his father died and worked as an actor, prop master and playwright. Annoyance at the problems with the printing of his second play led him to experiment with printing methods himself.

Letterpress and intaglio printing were well known back then; but Senefelder discovered a third way in Munich in 1796. After many experiments, he tested an ink he had developed himself from wax, tallow, soap, pine soot and water on a smoothly polished Solnhofen limestone plate. He had this to hand because these limestone slabs were often used to line the corridors of houses in Munich at that time. He noticed that the surface of the stone that was not covered with his wax ink could be etched away with nitric acid. The etched surface could be blackened with a letterpress ball and printed. 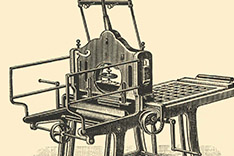 From this discovery, Senefelder developed the process of "stone scribing" (Greek: lithography): a laterally reversed print motif is applied to a smooth stone with greasy ink. The stone is then wetted with an aqueous solution. Grease and water on the stone repel each other, and only the water-repellent print motif adheres to the subsequently applied ink. This can be pressed onto paper or cardboard.

In this revolutionary simplified flat printing process, the printing and non-printing parts are therefore on the same plane, but differ in their physical and chemical properties. This is why Senefelder called his process "chemical printing" or stone printing. 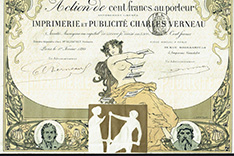 Picture of Senefelder on a share of the printing house "Imprimerié et Publicité Charles Verneau", 1899

The new process was particularly suitable for the reproduction of drawings, maps and sheet music. It was considerably simpler and therefore also much cheaper than the copper engravings or woodcuts that had been common until then.

In 1799, Senefelder received a "Privilegium exclusivum" for 15 years, practically a patent, from the Bavarian Elector for his "newly invented, hitherto completely unknown method of printing on stone". However, intellectual property rights were still in their infancy at the time and were difficult to enforce in practice, as Senefelder soon found out.

Together with his friend and patron, the composer and court musician Franz Gleißner, he founded the "Königliche alleinprivilegirte Steindruckerey von Aloys Senefelder, Franz Gleißner & Comp. in München". In 1799 Senefelder sold his "secret of printing notes and pictures on stone" to the music publisher Johann Anton André in Offenbach. There, in 1800, the first lithographic printing works was established with his and Gleißner's collaboration. André was the first address for music printing at the time. Shortly before his death, Mozart himself visited him in Offenbach. Later André bought his entire musical estate from his widow Constanze. As André's collaborator, Gleißner compiled the very first index of Mozart's works (sorted by genre, not chronologically). Mozart's piano concertos were the first lithographic prints that André brought out.

In the following years, Senefelder tried to establish lithographic printing houses in England, France and Austria, partly in cooperation and partly in competition with André and his own brothers. He found that his Bavarian "privilege" was of little use outside the country's borders. Even in Munich, his patent was infringed by the founding of a "Lithographische Kunstanstalt" and by the Tax Cadastral Commission. The latter had discovered how wonderfully suitable lithography was for maps. As a kind of compensation, Senefelder was employed as an inspector by the Tax Cadastral Commission in 1809.

A recipe for success

Lithograph stone with the logo of the "Hoffmanns Stärkefabrik Bad Salzuflen"

But it was not only the surveyors who enthusiastically embraced the new printing process, artists did too: critical minds such as Honoré Daumier used the technique to disseminate political caricatures. Composers were finally able to reproduce their works easily. Stamps, banknotes, leaflets and newspapers could be produced at fair price. Printed matter of all kinds now reached the masses quickly and cheaply - an essential prerequisite for the revolutionary movements in the "Vormärz" and afterwards.

Alois Senefelder, who lived in Munich at Sendlinger-Tor-Platz 5, remained inventively active until the end of his life (1834) and continued to improve his printing process. He replaced the stones with metal plates and received a "privilegium" for this again in 1818 from the Bavarian ruler (who in the meantime had been upgraded to king). This also laid the foundation for the further development of offset printing, which largely replaced lithography in the 20th century. Today, it still plays a role mainly in art graphics. 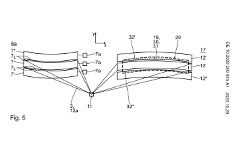 In 1818 Senefelder published a "Vollständiges Lehrbuch der Steindruckerey". In 1826 he succeeded in colour printing and in 1833 in reprinting oil paintings on canvas. He received numerous international honours and was able to experience how his invention - and with it his name - spread around the world.