The reinvention of breathing

Bernhard Dräger was born in Kirchwerder near Hamburg on June 14, 1870, and was to write an important piece of German technical and corporate history. Together with his father Heinrich, he developed breathing apparatus for mining and firefighters, resuscitation equipment, automatic anesthetic machines and diving equipment. Thanks to his inventions, his father's small company rose to become a globally successful enterprise.

Johann Heinrich Dräger (1847-1917) had co-founded the company "Dräger & Gerling" in Lübeck in 1889, which among other things produced beer dispensers with compressed carbon dioxide (see e.g.

DE57301). At that time, the flow of gas (and thus of beer) was still difficult to control. Heinrich Dräger and his son Bernhard, who had just completed his apprenticeship as a mechanic, therefore developed the comparatively light and precise

By 1892, the factory already had ten employees. Since 1895, father and son named the company "Drägerwerk". Because Heinrich had hardly any knowledge of business administration, Bernhard took bookkeeping lessons in the evenings from a businessman friend. The fiddly son also wanted to deepen his knowledge and attended the Technical University in Berlin for two guest semesters.

Oxygen and its potential 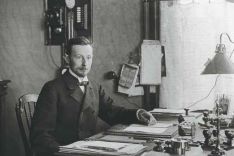 Bernhard soon became the top inventor in the company and devoted himself primarily to oxygen. He recognized the potential that lay in the use of compressed oxygen - a basic technology that could be used for a wide range of products from soldering and welding technology to respiratory and breathing apparatus.

The small company had taken big steps in research and development. From 1899 onwards, the results were launched on the market: the "Oxygen/Hydrogen Automatic", a reducing valve for dosing oxygen and hydrogen, and the "Finimeter", a high-pressure manometer that for the first time allowed the exact filling level in oxygen cylinders to be displayed. 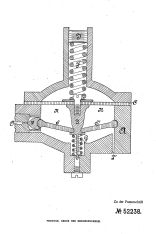 Drägerwerk then became known primarily for breathing apparatus for the mining industry. From 1901, Bernhard Dräger's development work focused on respiratory protection. The real breakthrough came with the successful Model 1904 rescue apparatus. These devices, which Bernhard constantly optimized, were soon being used in mines all over the world. In 1907, the Lübeck-based company expanded overseas and founded the subsidiary "Draeger Oxygen Apparatus Co“ in New York. Even today, rescue workers in the mining industry in the USA are called "Draegermen" because of their breathing apparatus. 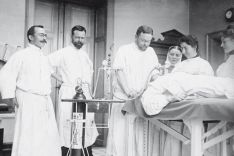 Together with the Lübeck surgeon Professor Otto Roth, the Dräger team developed the first anaesthesia apparatus. In this apparatus, chloroform or ether was nebulized in an oxygen pressure flow and inhaled by the patient with pure oxygen. In 1902, the "Roth-Dräger" mixed-anaesthesia apparatus solved the major problem of dosage: for the first time it was possible to reliably regulate the ratio of oxygen and anaesthetic. This finally made anaesthesia controllable.

One problem, however, remained: the patient breathed out parts of the anaesthetic gases again, which could then influence the medical staff during the operation. The solution was provided by closed-circuit technology, which had already proven its worth in Dräger mining equipment: the exhaled air was fed back into the device, where an alkali cartridge bound the carbon dioxide. The exhaled air was mixed with anesthetic gas and oxygen and inhaled again by the patient. Over the next few years, Bernhard optimized this quickly very widespread apparatus with devices for overpressure operations.

Artificial respiration with the "Pulmotor" 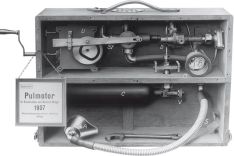 One of the most important developments of the company was made by father Heinrich. In London he had seen a young man being rescued from the Thames and resuscitated with manual ventilation. Heinrich had the idea of giving people mechanical ventilation while they were still at the scene of the accident and developed the world's first ventilator: the "Pulmotor".

The technology of the "Pulmotor" (see

DE384245A) was impressively simple and remained the basis of machine ventilation for decades: it was operated with compressed oxygen and alternately generated positive and negative airway pressure. The device delivered breathing gas until a certain pressure was reached in the lungs. Then it switched to exhalation. First used by the Berlin fire brigade in 1907, it became a great success and remained essentially unchanged in service for decades. DE529399). With these the crew members could emerge individually from a sunken boat in an emergency. He also designed air purification systems and tubeless oxygen diving apparatus for depths of up to 80 metres (see

DE331363). For the up-and-coming balloon and aircraft technology Bernhard constructed high-altitude breathing apparatus for low-oxygen air layers. With the outbreak of World War I, the Drägerwerk was converted to war production and delivered several million gas masks (see e.g.

Inventor to the last breath 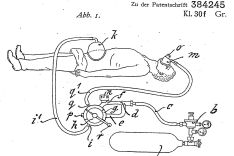 Bernhard Dräger was an inventor with heart and soul. Again and again he improved his breathing devices (see e.g.

DE485133) and tested all new developments personally. He gave his very last signature for the patent department the day before his death. According to Dräger, between 1900 and 1928, the year of his death, he and his father were granted 261 German and 443 foreign patents and 912 utility models.

Bernhard Dräger died on January 12, 1928 at the age of only 57. His son Heinrich took over the management of the company - and kept it until 1984, which is probably quite unique in German economic history.

Dräger company, now managed by Bernhard's great-grandson Stefan, is still considered one of the leading manufacturers of medical and safety technology today. Demand for the ventilation and respiratory protection devices that the company continues to manufacture rose sharply in the wake of the COVID 19 pandemic in 2020. Dräger had to increase its production capacity considerably and recieved many orders, one of the biggest of them coming from the German government.