It's been half a century since one of rock'n roll's greatest icons died: Jim Morrison. The self-destructive poet, who was found dead in Paris on 3 July 1971, shaped the "Doors" as a singer and songwriter, one of the most influential bands of their time. With them, an outrageously dark, dazzling, simultaneously lyrical and aggressive tone burst into the flower power pop world of the late 1960s. The "Doors" were also one of the first bands to work with a fixed logo, which was later protected as a word-picture trademark.

"Jim Morrison writes as if Edgar Allan Poe had returned in the guise of a hippie," wrote a newspaper at the time about his poetry. Born the son of a Navy admiral on 8 December 1943 in Florida, James Douglas Morrison actually wanted to make films. His student friend, the organist Ray Manzarek, persuaded him to form a band. And this group, which named itself after an essay by Aldeous Huxley, soon went through the roof.

Songs like "The End" or "Moonlight drive" had not been heard by the world until then - nor had a rock band covered songs by Bert Brecht and Kurt Weill ("Alabama Song"). The psychedelic-bluesy sound of the Doors was unique, the musicians were among the most accomplished of their time. 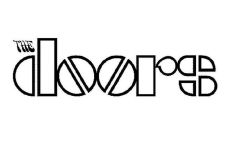 The debut album of the Los Angeles band, released in early 1967, was adorned with a "The Doors" logo, which remained the band's trademark from then on. However, the famous lettering was only registered as a European word-picture trademark in 2012 (011348596).

After Bob Dylan and John Lennon, Jim Morrison was one of the first pop songwriters with high poetic standards. As a charismatic frontman, he quickly became a sex symbol and the voice of the abysmal in the hippie generation. But fame became a problem for the sensitive artist, who took the drug use that was common in the industry at the time to extremes and became increasingly unpredictable. 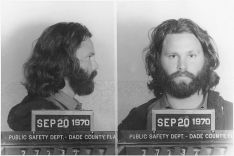 The poet as public enemy: Morrison often came into conflict with the law

Doors concerts were early examples of "rock theatre": Morrison expanded the music with elements of performance, happening, poetry reading and shaman rituals. Sometimes, however, he was simply too drugged up to pull off a sensible concert. Jim Morrison became a public enemy of the Nixon era and the first rock star to be arrested live on stage (in New Haven in 1967). He is also said to be the inventor of "stage diving" as the first singer to throw himself off the stage into the audience. He got into big trouble after a concert in Miami in 1969: he was sentenced to prison for alleged "indecent exposure" and "blasphemy". He remained free on bail, but the sentence was not overturned until 2010.

Against this backdrop, guardians of public morals in this country were also outraged when the Bundespost dedicated a stamp to Jim Morrison in 1988 as part of a "For the Youth" charity series featuring dead rock stars. A drug addict on a postage stamp? Scandalous. The fact that Presley and Lennon, who were also honoured with stamps, had drug problems too was ignored.

Morrison seems to have followed his path to self-destruction quite consistently (Doors drummer John Densmore later called him a "Dionysian kamikaze"), but the circumstances of his death nevertheless remain a mystery to this day. He had left the Doors and the USA in early 1971 to live in Paris, the city of poets he admired. There he was found dead in the bathtub one morning. Numerous legends entwine around these events. 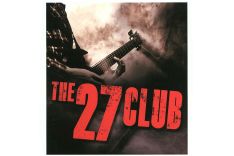 Jim Morrison was 27 years old when he died. Since several other prominent fellow musicians shared this age of death, the idea of a "Club 27" spread. For example, Jimi Hendrix, Janis Joplin, Amy Winehouse, Kurt Cobain, Brian Jones (Rolling Stones) or Blues legend Robert Johnson were only 27 when they passed away. 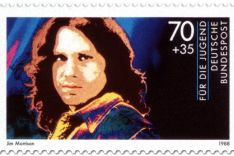 Morrison stamp of the Deutsche Bundespost (1988), designed by Antonia Graschberger

Commercialisation was not Morrison's thing. It is part of the band's folklore that there was a heated argument when his band mates released their hit "Light my fire" for a car commercial without his consent. Today, this song title has been secured as a word mark by a Swedish briquette manufacturer (002493237) and a Worpswede tea manufacturer (014882385), and also by a software company as a word-picture mark (3020202200250).

Decades after Morrison's death, John Densmore again took legal action against the use of a Doors song for a car advertisement. True, it was kind of weird to stop yourself from making millions of dollars to assert the primacy of artistic integrity over filthy lucre, Densmore said. But, "'Break on Through' for a gas-guzzling SUV? No!"

The drummer waged a years-long legal battle with his ex-bandmates Manzarek and Robby Krieger because they were giving concerts (without him) under the name "Doors of the 21st century". Densmore won in court. The two then performed as a band under the name of the last big Doors hit: "Riders on the storm". - A Berlin-based manufacturer of surfing accessories secured this very song title as a word mark in various classes of goods (including DE 3020161008369); a word-picture mark is also registered (DE 3020151051075).

Jim Morrison, who wished to be remembered as a poet, was buried near his idols in the Père Lachaise cemetery in Paris. His grave remained a pilgrimage site for fans through the decades. On the 50th anniversary of his death, it is was probably very lively there again.