The Beatle and his bass

One runs out of superlatives when it comes to this jubilarian. To cut a long story short: Paul McCartney is the greatest musical genius of the pop music age, that´s it. On June 18, the rock Mozart celebrates his 80th birthday. But there is no sign of retirement: a few days later, he will be headlining the largest British music festival in Glastonbury. 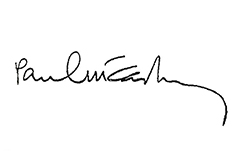 A talent like McCartney would probably have become a star in any case. But the fact that he got together in the late 1950s with a couple of other Liverpudlians who also turned out to be veritable rock geniuses was really a stroke of luck. The combo became the most famous, most successful and (for many) the best band of all time. It still holds a few sales records more than half a century after their breakup. The name of the band? "The Quarrymen."

That was the name of John Lennon's school band, which McCartney joined. It was then renamed and reshuffled a few times. With George Harrison, a great lead guitarist and long underestimated songwriter joined. When, after hard years of training in Liverpool and Hamburg, a record contract came closer, the three of them fired their drummer and brought in Ringo Starr. The Beatles - for that was the name of the band in the meantime - were complete. The rest is history. 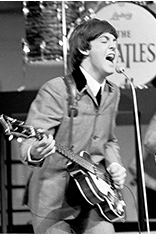 Beatle Paul with his violin bass, 1964

But the musical journey continued even after the breakup of the "Fab Four" in 1970. Paul McCartney has since released almost 50 albums, including 19 solo albums alone, various records with his band "Wings", live albums, several classical projects such as the oratorio "Ecce cor meum" and a ballet or electro experiments under the pseudonym "The Fireman".

There would be endless things to write about Sir Paul (knighted by the Queen in 1997). Of course, we approach the subject from an IP rights perspective. So let´s have a look at McCartney's main instrument: his bass.

Actually, McCartney played guitar in the Beatles, sometimes also piano. But when bassist Stuart Sutcliffe left the band in Hamburg in 1961, he had to take his place. McCartney looked around Jungfernstieg for an instrument.

"I couldn't afford a Fender", he later recalled. "But there was this fairly inexpensive bass." The "Höfner 500/1," also called a violin bass because of its classical shape, cost an affordable 287 Deutschmarks at the time. 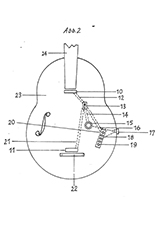 In contrast to Jimi Hendrix, for example, who simply played an upside-down right-handed guitar, McCartney attached importance to the look: "I thought it looked better on me as a left-hander because of its symmetry." He was also enthusiastic about the instrument's low weight and good playability. The Höfner bass became his favorite instrument and world famous as the "Beatles bass."

Like the classical string instruments whose shape he quotes, the 500/1 bass has a maple soundbox with a spruce top, but without sound holes. The sound is picked up by two "humbuckers". This type of two-coil pickups became famous thanks to a fundamental patent of the US guitar manufacturer Gibson (

US2896491A). In guitarist circles, these Gibson pickups are still called "PAFs" because in the early years they bore the inscription "P.A.F. - Patent applied for".

The innovation in the "Beatles bass" 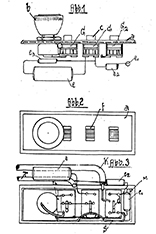 Höfner, a traditional company from Bubenreuth in Bavaria, had also applied for a utility model for its own "pickup unit for plucked instruments" with an interposed transistor in 1957 (

A special feature of the electric bass are the three sliders it has in addition to the two potentiometers for volume control of the pickups. The technical basis for this is the utility model

"With the potentiometer, the electrical equipment can be completely switched off and set to the desired outermost volume at the start of playing, i.e., to that volume which the musician desires during solo playing. When playing rhythmically, i.e. with audible accompaniment, he operates one of the three slide switches inserted in the plate, which causes the set full volume to be reduced as required. In addition, the player, regardless of whether he is playing rhythm or solo, can change the timbre by setting one slide switch to bright and the next slide switch to dull. These two slide switches cut either the lower or the upper tone frequencies, so that in the former case the instrument sounds bright and reproduces the high notes especially well, and in the far case it sounds dull and the basses are especially emphasized." 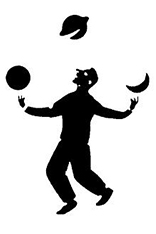 Höfner advanced instrument making with a number of innovations during these years, such as a "tone vibration controller for plucked instruments" that allowed a vibrato effect to be switched on directly at the instrument (

"device for generating spatial auditory impressions on plucked instruments" provided for two pickups mounted as far apart as possible on the instrument's top and a tandem controller that mixes the audio frequency voltage in equal parts. Thus, "a spatial listening impression of very special effect is achieved" (

This innovation was also used on the violin bass. McCartney bought another Höfner bass with this modification in 1963 - by which time the Beatles were already world famous. It became his new main instrument and remained so (with interruptions) until today. You can still see both of them in action on stage. 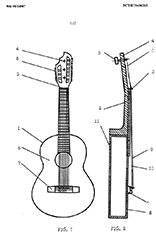 But the first bass - the one he bought in Hamburg - became his reserve instrument and was used only sporadically. This bass disappeared in 1969 during the recording of the "Get back" film project, which was released in 2021 in the adaptation of star director Peter Jackson; it is also featured in it.

This stolen Höfner bass is perhaps the most famous lost instrument in rock history (along with Eric Clapton's "Beano" Gibson Les Paul, which disappeared in 1966). If you want to look for it: the manufacturer describes the bass in detail on his

website . Please send any information about its whereabouts to Höfner or Sir Paul. The value of this instrument today is hard to estimate.

"Macca" also seems to have been an instrument maker himself. At least in a patent application of 1994 a Paul McCartney, London, is named as author besides two Russians: "Plucked string instrument and method of tuning such instruments" (

WO001995014987A1 (0,97 MB)). It describes a multi-stringed instrument with the shape of a classical guitar. Unfortunately, we do not know more details about it.

McCartney and the brands 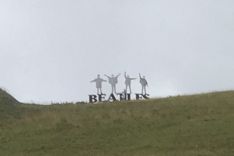 Beatles monument in Obertauern, where parts of the film "Help!" were shot.

His wife Linda, who died in 1998, was a committed vegetarian like Paul and appeared in public with recipes, among other things. The extinct MPL trademarks "MacVege" (EM 000207373) and "ProMac" (EM 000572727) are probably to be understood against this background. There was also a German word-picture trademark "Linda McCartney" (DE 2911930).
The most recent MPL trademarks to date are an expression of what else the versatile Sir Paul is up to - writing children's books. The main character is the rocking grandpa "Grandude" (EM 015552979, EM 015989809).

His last solo album so far is called "McCartney III", because it is the third album he recorded completely alone and played all instruments on it by himself. This time, however, it was more of a stopgap measure, as it was recorded in "Rockdown", as he called the pandemic-related curfew. The album topped the charts - extraordinary for an almost 80-year-old, almost normal for a superlative artist like "Macca".

The multi-instrumentalist sometimes annoyed drummer Ringo even in Beatles times, because he occasionally pushed himself to the drums (to be heard for example on "Back in the USSR"). In any case, one can still expect further musical surprises from him. Happy birthday, Sir Paul!