It did not start in the garage but in the pub

This story begins in the big hall of the pub “Deutscher Hof” in Hörselgau in Thuringia in 1920. There, the Ravensburg-born engineer Arthur Ade, together with the merchant Herrmann Irrgang, founded Maschinenfabrik Hörselgau Ade und Irrgang. As early as 1924, the company had more than 80 employees and moved to Waltershausen, two kilometres away, because the hall of the pub had been too small for quite some time. 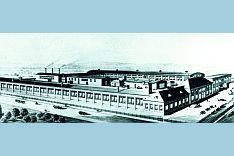 Factory in Waltershausen before the Second World War

The Great Depression in the late 1920s and during the 1930s did not leave the company in Waltershausen unscathed either. As a consequence, the company went bankrupt and was re-established as Ade Betriebs GmbH without the business partner Irrgang. During the Second World War, the company produced ammunition limbers and chassis frames for tank lorries and light utility vehicles.

After the end of war, the Soviet Military Administration confiscated the factory, which was almost entirely dismantled. With what had been left of the factory, Gerätebau Waltershausen GmbH started to produce farm trailers, fertiliser trailers and the like.

From Diesel Ant to Multicar 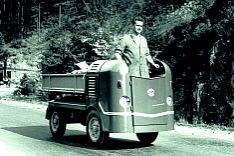 The story of the Multicar began in 1956 with the production of the diesel ant DK2002, which was an improved version of the DK3 diesel cart from Brand-Erbisdorf in Saxony. The vehicle was operated by feet, with the driver standing upright. In 1957, the DK4 diesel cart, which had a front door to protect the driver up to his hips, followed.

In 1959, the October issue of the factory’s house magazine asked the employees to find a catchy and easily memorable name. The term “ant” was already protected both in the GDR and in West Germany. In addition, the name was to be internationally understandable and should not have been protected yet. Of the 149 suggestions submitted, 13 suggestions, including names such as Multicar, Fawafix, Unicar and Robotfix, were put on a shortlist, from which the factory management chose the name.

The name “Multicar” won the race, and the trade mark was applied for with the Office for Inventions and Patents on 7 December 1959.

At the 1964 Leipzig Spring Fair, the enterprise from Waltershausen presented the short-range vehicle Multicar 22 – with a closed and detachable one-person operator’s cab, forward-control construction and synchronised four-speed transmission. In ten years, 42,579 Multicar 22 units were produced, half of which were exported. In the Federal Republic of Germany, it was sold under the name “Fawa Car 22”. 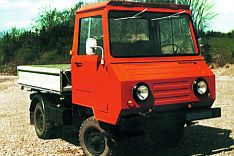 The fourth generation, Multicar 24, had a four-cylinder engine, a steel profile frame with a standardised hole pattern for superstructures and several hydraulic systems. In 1977, the 24-0 model, a two-seater, was placed on the market, and 25,659 units of this model rolled off the assembly line until 1978. Half of these vehicles were exported too.

Multicar 25 even with a four-wheel drive

The technically and visually improved Multicar 25 was placed on the market in 1978. Its recognition features were the elongated downward windscreen and the long side windows on the forward-facing side of the doors that gave an ideal view of the front equipment and the fittings. From 1982 onwards, a four-wheel option was available. In 1980, the factory in Waltershausen was the largest manufacturer of vehicles of this type worldwide. The Multicar was available in 20 countries at that time.

Multicar production was continued after 1989 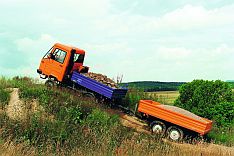 An important milestone was the political process of reunification in 1989/90. The vehicles were still finding a ready market, and in 1990 the name of the enterprise was changed to Multicar Spezialfahrzeuge GmbH Waltershausen. As early as 1991, Multicar 91, which had an unchanged appearance, was launched with a Volkswagen diesel engine. A lot of fittings and superstructures then came from France, Spain and Italy.

In 1992, Multicar 26 was launched with a more modern and sound-absorbing operator’s cab and an IVECO turbo diesel engine and with more than 100 powerful pieces of front equipment and fittings of renowned producers. 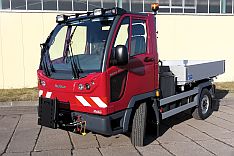 In 1998, Hako Group, based in Bad Oldeslohe, became the principal shareholder of Multicar. Under Hako Group’s management, Multicar was developed to become the centre of excellence for special-purpose vehicles and acquired models from competitors, such as Tremo and UX 100 from Unimog. In 2005, Multicar and Hako merged; Multicar is now a business area of its own within Hako Group.

In 2012, after almost 20 years, the production of the M26 model, which was one of the key elements for the successful transition to the market economy, was stopped. The successor models M27 and M31 incorporate a further improved technology and have engines that meet the Euro 6c emission standard applicable to these vehicles.