The “cola of the East” under the five-year plan

The history of “VITA COLA” began in 1958, after the GDR government had called for improving the supply of non-alcoholic beverages to the population in its second five-year plan. As a result, the Ministry for the Food Industry commissioned Chemische Fabrik Miltitz (chemical factory) to develop a cola soft drink that was to be similar to “Coca-Cola” in West Germany.

Dr Hans Zinn, who headed the essences department at Chemische Fabrik Miltitz, is considered the father of the “VITA COLA” recipe. He created the unique taste of the beverage and combined a variety of essential oils from citrus, vanilla, cola nuts, caffeine and vitamin C. The Technical University of Dresden was also involved in the development: In 1958, their help was requested because the cola extract produced too much foam preventing the bottles from being filled accurately. 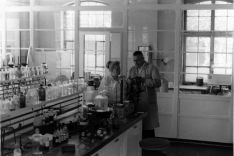 Finally, in October 1958, the state brewery Leipzig (Landesbrauerei Leipzig later VEB Sachsenbräu) began bottling the beverage and in November 1958 applied for the trade mark “VITA COLA” at the Office for Inventions and Patents of the GDR (registered word mark DD624672). Originally, the names “VITA COLA” or “Citrus Cola” were suggested for the new soft drink, but the choice finally fell on “VITA COLA”.

The people’s drink in the 60s

The state brewery also authorised the other state-owned enterprises to produce “VITA COLA” to meet the high demand. For this purpose, a concentrate, known as the base substance, was supplied to the plant in question. The latter refined the base substance into “VITA COLA” and marketed the drink under its own label. The visual appearance on the market differed widely, but the taste experience was always the same.

As early as 1960, 106 companies were granted a production permit and turned “VITA COLA” into a true people’s drink. Although these other companies also used the “VITA COLA” brand, the trade mark rights continued to belong exclusively to the state brewery.

In a large-scale campaign in the early 1960s, the companies advertised their product as a pick-me-up drink for drivers and during long meetings. They argued that the caffeine content of a bottle of “VITA COLA” was equivalent to half a cup of coffee, and that at the same time this soft drink had the high vitamin C content of a juicy lemon – which meant that the drink was also beneficial to health.

It was not until 1967, almost ten years after the market launch of “VITA COLA”, that the second large cola brand, “Club-Cola”, was introduced to the GDR market. Club-Cola was given a distinctly smoother and sweeter taste, which was oriented towards the taste of Western brands.

After production had been discontinued following the fall of the Berlin Wall or continued with changing names by smaller breweries, the trade mark was taken over by Thüringer Waldquell Mineralbrunnen GmbH in 1994, which was part of Brau & Brunnen Group. On 1 August 2005, the brewery and the “VITA COLA” trade mark were finally transferred to the Hessian company Hassia Mineralquellen, which has been using the trade mark ever since.

The range of products has now been expanded to include sugar-free versions, lemonades and energy drinks. But the basic recipe of “VITA COLA” has not changed for 50 years.