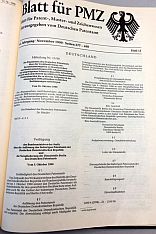 What happened to the GDR IP rights

What had to happen to the GDR IP rights was already set out in the Unification Treaty of 31 August 1990 and transposed into law by the Extension Act of 23 April 1992. Owing to the GDR’s membership in international IP organisations, the statutory provisions concerning the protection of intellectual property were almost identical in both German states.

After 3 October 1990, the DPA had to ensure the processing of the IP rights existing or applied for in the GDR. For this purpose, 111,000 GDR patents, namely 97,000 economic patents (Wirtschaftspatente) and 14,000 exclusive patents (Ausschließungspatente), were integrated into a common register. German patents confer their holders the right to exclusive use of their invention for a limited period of time. In the GDR, such right of use was referred to as an exclusive patent. Only a small part of patents were exclusive patents. More frequent were patents referred to as economic patents, which all state-owned enterprises were allowed to use for a fee.

After the reunification, more than 19,000 applications for change of an economic patent into an exclusive patent were processed. This change was provided for by the last amendment to the GDR Patent Act of July 1990. The last GDR patents expired on 31 October 2010.

Compared to other IP rights, trade marks can be maintained for an unlimited period of time. This also applies to GDR trade marks. The term of protection can be renewed by another ten years as often as necessary if the respective renewal fees are paid. As late as 2 October 1990, 259 new applications were filed with the AfEP. A number of former GDR brands still exist or are even strong brands on the market today. Of the more than 42,000 GDR trade marks integrated into the DPA’s system, 3,948 trade marks live on (as of September 2020).

On our pages about the "Traditional Brands East" we tell some exciting stories: Did you know, for example, what the model for the shape of the "Halloren balls" was, how the "Multicar" got its name or after whom "Filinchen" is named?

We now celebrate 30 years of German unity. Due to the coronavirus pandemic, we mark this anniversary in uncertain times. It appears that many things are no longer what they used to be. Long-standing habits and practices – handshaking, going to concerts or the necessary personal presence at a meeting – have had to be abandoned: lockdown in Germany, home schooling for children, parents bearing the dual burden of working and teaching. We now exchange fist bumps, communicate via conference calls or video conferences and work from home. But for many people in Germany and all over the world, the coronavirus situation does not only mean abandoning habits and rituals and not going to concerts or stadiums. Millions of people are worried about their jobs and how to make a living.

In some ways, the situation today resembles that in 1989, when a steadily growing number of GDR citizens “voted with their feet” and left the economically ailing country. The Eastern Bloc collapsed, the border between Austria and Hungary became porous in the summer of 1989. On 9 November 1989, the Berlin Wall fell.

If it is a bitter situation for all of us, the coronavirus pandemic perhaps helps our society better understand what the citizens of the former GDR had to cope with at that time, namely what it meant to give up a reliable structure and to lose economic and social security, what strength and courage was necessary to optimistically look ahead and how worried people were about what the future would bring.
The turning point for the GDR’s economy was in 1990. In July, the Monetary, Economic and Social Union was established, including the introduction of the Deutsche Mark. From one day to the next, the cut-off country became part of the global market. A radical economic change followed.

The unthinkable happened: On 3 October 1990, 80 million Germans, including approximately 450 employees of the former Office for Inventions and Patents in East Berlin, witnessed the German reunification. On the same day, the Office for Inventions and Patents was integrated into the German Patent Office, the predecessor of the German Patent and Trade Mark Office, and many of the AfEP employees were wondering what would happen to the GDR patents and trade marks and what the consequences would be for them. Would they keep their jobs and where would they live – with the (West) German Patent Office located in Munich, not in Berlin?

On our sites concerning the German Unity Day and the merger of the patent offices in West Germany and East Germany, people who worked at the Office for Inventions and Patents and the German Patent Office recall the events and take us to a time that changed the history of a divided country.