The origin of the Christmas stars 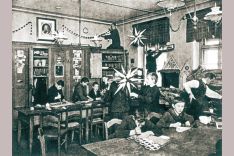 Pupils at the boarding school of the Moravian Church

On 17 June 1722, the village was founded by the descendants of the Protestant Unity of Brethren of Moravia. At the beginning of the 19th century, the first star made of paper and cardboard in the colours red and white shone in the rooms of the Moravian boarding school. Built by a tutor in mathematics class, it was intended to help pupils obtain a better understanding of geometry.

The beginning of the star manufactory 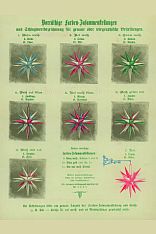 The foundation of the star manufactory is closely linked with the name of the book and music publisher Pieter Henrik Verbeek, who sold the first stars in his bookstore. At the end of the 19th century, he invented the first stable star that could be assembled from parts. The new thing about it: It was possible to assemble the star by sliding the metal frames of the paper points into rails fitted to an openwork metal body base. Thus it was possible for the first time to fold the star and ship it.

Only genuine with 25 points

In the years that followed Verbeek developed the construction method further and founded Stern-Gesellschaft mbH Herrnhut, in which the mission department of the Moravian Church also held shares. In 1925, Verbeek applied for a patent for the first frameless star. Since then, the construction method has changed only slightly – always using 17 points with a square base and 8 points with a triangular base. Mass production, sales and delivery were facilitated by the self-supporting construction. After just a short time, the metal frames were replaced by grey cardboard frames and snap fastener clips were used for assembling the star. 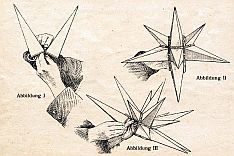 Ten workers produced about four thousand stars each month, and worldwide exports were launched in 1926. Things came to an abrupt end in the Third Reich: At the end of 1940, the production of the Christmas stars was prohibited, and by the spring of 1945 the entire production came to a standstill.

Stars in the state-owned enterprise

In 1950, Stern GmbH was nationalised. As VEB Oberlausitzer Stern- und Lampenschirmfabrik (Upper Lusatian star and lampshade factory) it again delivered stars beyond the GDR borders from 1956 onwards. Soon the majority of the products were exported. For the GDR citizens, only the remaining export surplus was sold under the counter. In 1967, star production was returned to the Moravian Church because handmade Christmas stars did not fit at all into the socialist ideal of industrial production. 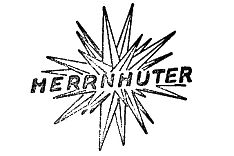 In GDR times this was a rather unusual transaction. However, business development was difficult because the new company was also subject to state planning.

New beginning after the fall of the Berlin wall

After the end of the GDR, in 1991, the Herrnhut star manufactory was relaunched as a limited liability company with 23 employees. Work processes were rationalised and made more cost-effective without abandoning the label “hand-crafted” and new machines were purchased. At the end of the 1990s, the number of stars produced annually rose to around one hundred thousand. Today, 140 staff in Herrnhut produce around 700,000 stars a year, which make their way all across the globe.