Clever bikes labelled with a head

On 1 January 1885, the brothers Friedrich and Wilhelm Nevoigt founded their first joint enterprise. They produced knitting machine sinkers for hosiery mills and, in 1887, added pens to their product line. In 1895, they started to produce bikes specifically developed under the trade mark “Diamant”.

In 1898, the Nevoigts introduced the twin roller chain they had developed themselves; bicycle chains still work that way today. In 1911, the well-known mark “Kopf über Fahrradlenker” was entered in the trade mark register.

In 1910, the first Diamant company cycle racing team was founded. In 1921, it won 20 of a total of 29 major cycle races. In 1936, the two-man team Ernst Ihbe (Leipzig)/Carly Lorenz (Chemnitz), riding the new Diamant racing bike model no. 67, won at the Olympic Games in Berlin, the German championship and the world championship in Zürich.

After the Second World War, in 1946, Diamant became part of Awtowelo, a Soviet limited company, before, in 1952, the enterprise was transferred as VEB Elite-Diamant, Chemnitz to the Industrieverband Fahrzeugbau (IFA) (Industrial Association for Vehicle Construction). One year later, the name of the enterprise was changed to VEB Fahrradwerke Elite-Diamant, Karl-Marx-Stadt. Diamant introduced the assembly line production in vehicle construction as early as 1950.

In 1955, the sports legend Gustav “Täve” Schur won the Peace Race on a Diamant bike. In the following year, the three millionth bike rolled off the assembly line.

In 1969, the VEB Elite-Diamant became part of VVB Textima. In the Federal Republic of Germany, the Diamant bikes were sold under the brand name Diadem. 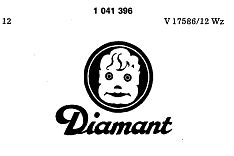 The trade mark Diamant lives on

After reunification, the enterprise was privatised in 1990 and changed its name to operate as Diamant Fahrradwerke GmbH from 1992 onwards. In 1992, the Swiss group of companies Villiger acquired the trade mark. When the bicycle market was in a crisis, Villiger withdrew from the business. American family-owned enterprise TREK took the opportunity. In 2003, Diamant was back on the right track. TREK later decided not to continue any other separate bicycle marks besides TREK, with one exception: Diamant. Diamant now produces approximately 200,000 bikes per year at its Hartmannsdorf site (as of 2018).