The invention of "Meissen porcelain"

August the Strong (1670-1733), Elector of Saxony and King of Poland, did not only have a passion for the fine arts but also for Chinese porcelain. This was very expensive, only silver and gold were accepted as payment. So the "King of Saxony" relied on the art of alchemists and summoned the young Johann Friedrich Böttger to Dresden. At first Böttger tried in vain to make gold from base metals. In 1707, after many series of experiments with mixtures of ores, minerals and alumina, he succeeded in producing a red porcelain stoneware – "Böttgersteinzeug" (Böttger ware) – still registered today as word mark DD231494. 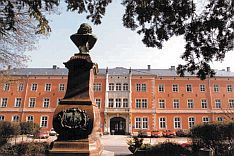 A laboratory protocol of 15 January 1708 finally documents the birth of Meissen porcelain: When Böttger added white "Colditzer clay" and alabaster to his mixture, the "white gold" was created. In 1710, August the Strong founded the first European porcelain manufactory, which was initially based at Albrechtsburg castle in Meissen. In 1865, the porcelain manufactory moved to the nearby Triebisch valley, where the Meissen State Porcelain Manufactory is still located today.

How the "crossed swords" came into existence

The recipe for Meissen porcelain was initially kept secret, and the workers were only inducted into part of the manufacturing processes. Although the staff was supervised in a prison-like manner, the arcanist Samuel Stöltzel succeeded in deciphering the recipe and fleeing with it to Vienna. In 1718, the second porcelain manufactory in Europe was established there.

In order to identify the authentic Meissen Porcelain beyond doubt, the manufactory henceforth marked all manufactured goods with two crossed swords.

In 1720, the blue underglaze colour was invented in Meissen. This meant that it was finally possible to reliably mark the porcelain and protect it against counterfeiting and imitations. From the beginning, the signs were painted on by hand, but initially this was done in a largely inconsistent and irregular manner. The decisive factor was usually the preferences of the future owners. In the subsequent period, Johann Melchior Steinbrück, the manufactory inspector, suggested using the swords from the coat of arms of the Electorate of Saxony. This gave rise to one of, if not, the oldest German trade mark.

Apart from the crossed pair of swords, sequences of letters were also common until 1730, for example

From 1731 onwards, the "crossed swords" had become generally established. In the period that followed, the trade mark underwent only minor changes. At times stars, dots, numbers and other characters were added, often according to the preferences of the respective manufactory directors. After the Imperial Act on the Protection of Trade Marks (Reichgesetz zum Markenschutz) came into force, the Meissen Porcelain Manufactory had its trade marks registered on 20 May 1875. From 1948 onwards, a year sign was stamped into the base of each piece of Meissen porcelain as an additional marking. Thus the year of production of each piece of porcelain can be proved beyond doubt.