From 2001 to 2017: the DPMA becomes a service provider with a strategy

President Dr Jürgen Schade, who succeeded President Dr Hans-Georg Landfermann in 2001, continued the paradigm shift at the DPMA with energy and vigour. He created a guiding concept that determined the transformation of the office from a traditional government agency to a modern service provider. Under the motto “Systematically shaping our future”, bureaucracy at the DPMA should be replaced by goal-oriented management processes.

With this orientation and the strategic thinking of its senior management (the senior management of an authority!), the office entered unchartered territory: the DPMA once again proved to be a pioneer in a long-term process, which has long since become established in the German administration landscape. 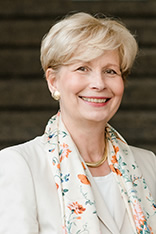 Cornelia Rudloff-Schäffer, President of the DPMA since 1 January 2009

Today, under the leadership of President Cornelia Rudloff-Schäffer, this process including the “DPMA2020” strategy development - with clearly defined goals and spheres of activity - is an important part of all areas of responsibility of the office and thus firmly anchored in the DNS of the office.

E-services, management, networking, monitoring, controlling - the DPMA has positioned itself as a prominent global player and modern service provider in the national and international IP system.

strategy development for the first time.

You will find the latest developments in the 2017 Annual Report, which we will make available on our website at www.dpma.de > Our Office > Publications in 2018.

125 years of the patent office: anniversary in a completely refurbished building!

The general refurbishment of the DPMA’s main building on Zweibrückenstraße in Munich, which had begun as early as 1991, was completed just in time for the 125th anniversary of the office. In 2001, after a ten-year construction period, the “major measure” was completed.

In addition to the removal of serious fire protection deficiencies and extensive building maintenance measures involving many innovative technical and energy-efficiency features, the refurbishment also brought some artworks to the building - via an “art-in-architecture” contest: a light sculpture by Dietmar Tanterl and 28 photographic works by Beate Passow. Passow's subjects deal with the topic of “intellectual property” in different ways, for example when, according to the work description, they “tell us about the creativity of inventing”. 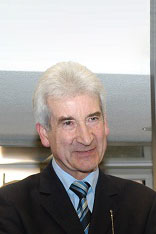 Those who take the paternoster lift to the 10th floor will be confronted with the photographic work “The invention of the red ultramarine”: for this invention by Johann Zeltner from Nuremberg the patent specification no. 1 was issued by the Imperial Patent Office (Kaiserliches Patentamt), on 2 July 1877. And just a few steps further on, you can see the light sculpture, mentioned earlier, in the DPMA cafeteria with its interplay of media.

In a publication on occasion of the completion of the general refurbishment, the then President Dr Landfermann wrote: “The architecturally and creatively successful combination of history and modernity symbolises the history of the office and, at the same time, the innovations produced by industry and inventors, to which the office ultimately owes its existence”.

The anniversary "125 years of the Patent Office in Germany" was celebrated on 11 July 2002 with a ceremony at the Max-Joseph-Saal of the Munich Residenz. In their welcome addresses, numerous speakers from Germany and abroad paid tribute to the office’s achievements in the field of intellectual property protection. 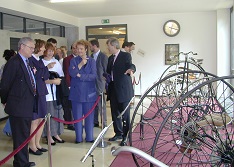 The then Federal Minister of Justice, Herta Däubler-Gmelin, on a guided tour of the exhibition of vintage bicyles marking the 125th anniversary

The keynote speech was delivered by Professor Dr h.c. Lothar Späth, the then CEO of Jenoptik AG and a former prime minister of Baden-Württemberg, who died in 2016. The title of his speech was “DPMA 2000: Innovations for Germany - with visions in the future”. Lothar Späth also had a humorous explanation ready as to why Baden-Württemberg was ranked only second behind Bavaria in terms of patent applications per inhabitants in 2001: “The only thing that makes sense to me is that it had to do with the usual traffic jam on the motorway that prevented the people from Stuttgart from arriving in Munich in time to file their applications, last year”.

By the way, since 2002 Baden-Württemberg has again been leading this comparative statistics!

If you want to have a look at the current comparative statistics of the German Länder, you will find all figures at www.dpma.de > Our Office > Publications > Statistics.

The route towards a “world mark”

On 1 October 2004, the European Community acceded to the Protocol Relating to the Madrid Agreement Concerning the International Registration of Marks (Madrid Protocol), creating an important link between the European system of Community trade marks and the international Madrid trade mark system and offering internationally operating companies access to nearly worldwide trade mark protection: 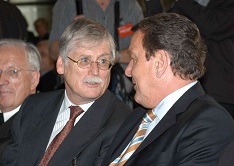 President Schade talking with Federal Chancellor Schröder at the symposium “Innovation and Intellectual Property in Germany” in Munich, on 6 July 2004

At that time, it was possible to extend protection of trade marks to 66 countries with a single application. The Madrid Union currently has 100 members, covering 116 countries; Thailand is the newest member having joined on 7 November 2017. The application for international registration of a mark is filed with the World Intellectual Property Organization (WIPO) through the DPMA.

And there was yet another widely noticed event in 2004 that also affected trade mark law:

Due to the enlargement of the EU and the accession of the ten new member states (Cyprus, the Czech Republic, Estonia, Hungary, Latvia, Lithuania, Malta, Poland, the Slovak Republic, Slovenia) on 1 May 2004, all Community trade marks registered or applied for, prior to the date of accession, were extended to the territories of the new member states. Protection was extended automatically, without being subject to a fee.

The future is approaching

Since the general refurbishment also included the establishment of an efficient data network at the DPMA - along with a new telephone system - great importance was attached to information services and IT developments at the office: The "DPMA2000" innovation programme paved the way for the speedy expansion of e-services and the introduction of the electronic IP case file. 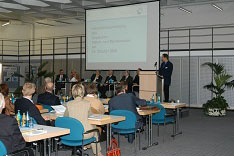 The first talks with representatives from business and industry (today: DPMAnutzerforum) on 18 October 2006 at the DPMA

Within the scope of the “BundOnline2005” programme for the future, initiated by the federal government at that time, PaTrAS (Patent and Trade Mark Application System), developed by the DPMA, acted as the main driver. A particular objective of "BundOnline2005" was to make the greatest possible use of synergy effects, even across institutional boundaries. With this objective in mind, the “one-for-all” pilot service was developed: a single office implemented a pilot application for all federal authorities, in that case the "electronic filing of IP applications". The PaTrAS IP filing system of the DPMA was one of only five such e-services throughout Germany defined within the framework of the “BundOnline2005” programme.

The path taken by the DPMA was the right one: the electronic IP case file followed eight years of development later. Since its activation on 1 June 2011, the fully electronic, i.e. completely paperless, administration and processing of patents and utility models has been possible. At that time, President Rudloff-Schäffer commented on the introduction: “Everything has changed since 1 June 2011. This date marks a historic turning point for our office.”

The complete interview with President Rudloff-Schäffer, published in the 2011 Annual Report, is available 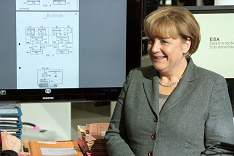 By the way, the first online file inspection was carried out only six months later, on 6 December 2011, but not by a "party to the proceedings" but by Federal Chancellor Angela Merkel, at the 6th national IT summit in Munich!

The electronic case file for trade marks has also been in existence since 23 March 2015.

Now, there is only one type of IP missing: the design, which was formerly called “Geschmacksmuster” in German and was renamed “eingetragenes Design” (registered design) upon the entry into force of the revised Design Act on 1 January 2014: we are already very close to introducing the fully electronic case file for designs. Signature-free online filing has been possible since 2013.

In the next 2017 Annual Report we will be able to give you a wealth of new information about this!

Renaming of the IP right was only one of two substantial amendments of design law: invalidity proceedings at the office were introduced in 2014. Formerly, legal action had to be brought before the regional courts to determine the invalidity of a design. Since 2014, the Design Division of the DPMA has decided on applications for the determination or declaration of invalidity. This Design Division is not identical with the (administrative) organisation unit at the DPMA, but a panel in charge of invalidity proceedings.

Thus an important harmonisation was implemented in the design area in 2014, bringing designs into line with other IP rights for which such proceedings about the validity of an IP right have already existed.

Looking to the future! 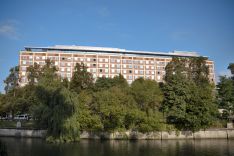 In the past twelve months, we have looked back on many major and minor developments that have shaped the Patent Office in Germany since the foundation of the Imperial Patent Office in Berlin in 1877 and have made the DPMA what it is today.

The 140-year history of our office is multi-faceted, it has gone through ups and downs and certainly will bring us many more exciting developments, both large and small, in the future.

The Press and Public Relations Unit of the DPMA

would like to thank the institutions, archives and museums in Germany as well as the colleagues who have provided valuable information for this online series of articles.

We thank all readers for their interest in the series!