At the beginning of the new decade, the era that would later be known as the "Golden Twenties" was not yet noticeable. The catastrophic consequences of World War I were omnipresent: unemployment, famine and inflation characterised the people's lives. However, from 1924 on, the country was on the upswing, both in economic and social respects. Arts, culture and science flourished. Thanks to the new city limits, expanded on 1 October 1920, Berlin had become the third-largest city of the world with a population of almost four million people (following London and New York; with regard to area, it was even the second-largest city - after Los Angeles). It quickly turned into the vibrant centre of the "Golden Twenties" in Europe.

Modern times at the Reichspatentamt 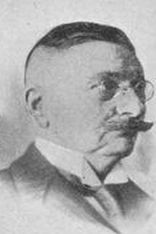 It was also a time of rapid changes at the Patent Office of the German Reich (Reichspatentamt). In early 1921, a new President came into office. From then on, Friedrich von Specht, lawyer by training, was in charge of the authority. And the office continued to grow. In a publication released in 1927 to celebrate the 50th anniversary, it reads: "The constant strong increase of all business affairs made a corresponding increase in the number of civil servants necessary." At the end of 1926, the staff consisted of 169 (then exclusively full-time) members and 824 other staff, including 56 employees and 109 workers. 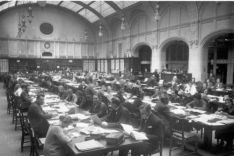 A look into the public library at the Reichspatentamt in 1926

The option of extending the legal period of a patent that had not been possible to be technically implemented or commercially exploited by the time falling into the war years 1914 to 1918, introduced in 1920, caused particular additional amount of work. As many as 25,000 patents were extended thanks to that option. In 1923, the maximum term of protection of a patent was increased from 15 to 18 years.

The office was proud of the introduction of writing materials, which were considered extremely modern at that time. They were intended to somewhat compensate for the enormous increase of the amount of work by facilitating business operation, as the 1927 publication mentions. The clerical office received new tools: from then on, typewriters, dictating machines, copying machines and duplicating machines made work easier. The photocopying service also had state-of-the-art equipment: photographic apparatus and photocopiers. For this reason, the clerical office had fewer members of staff at the end of 1926 than in 1901 despite the increased amount of work. 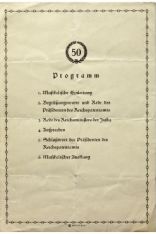 Programme for the ceremony of 1 July 1927

On occasion of the 50th anniversary of the patent office, a festive celebration took place on 1 July 1927 chaired by President von Specht. Numerous representatives from imperial and state agencies, technical and scientific associations, patent attorneys and lawyers as well as the Heads of patent offices of friendly countries came to the ceremony. 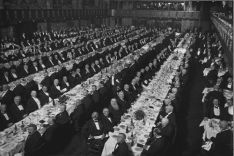 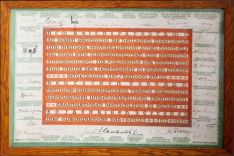 Certificate of the technical and scientific associations

Our poster gallery (in German) contains inventions that decisively influenced or are influencing our daily lives. The years 1921 to 1930 are represented, for example, by the device for projecting stars onto a dome by the company Carl Zeiss, the cantilever chair by Mies van der Rohe or the telescopic umbrella "Knirps".