From World War II to the new patent offices in East and West Germany: the years 1941 to 1950 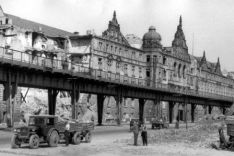 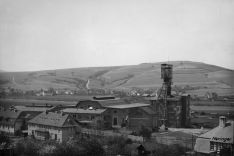 Potash mine Heringen (Werra) before World War II
Source: photo archive of the Werra-Kalibergbau-Museum in Heringen

Since the end of 1943, precautionary measures had been taken against war destructions. Evacuation of ten patent divisions with 180,000 files to a former monastery in Striegau, now Strzegom in Poland, and to the neighbouring town Jauer, now Jawor, was started. The material was transported in trains of barges via the Oder-Spree Canal, as no railway wagons were available.

The increasing bomb attacks on Berlin in early 1944 made it unavoidable to evacuate further stocks of the patent office. For safety reasons, larger parts of the library were brought to the Hessian town Heringen (Werra), about 400 kilometres from Berlin.

The office's property, approximately 250,000 volumes - other sources even mention 320,000 - was stored in the shaft of the potash mine. This shaft - around 600 metres below surface - was relatively dry due to its natural properties and therefore particularly good for storage of paper documents. A problem was the fact that the books were partly very old, had to be handled with care and it was tried to maintain the order. Therefore, the books were packed in work of several weeks around the clock and loaded in goods wagons. In addition to the library stock of the patent office, Heringen was also the shelter for the archive of the geological division of the Wehrmacht, a collection which later became known in expert circles as the "Heringen Collection" due to its wealth of books, atlases and instruments. 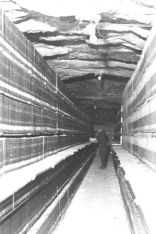 Storage of the patent office library 1944/1945
Source: photo archive of the Werra-Kalibergbau-Museum in Heringen

On 10 February 1945, the war came to Jauer - shots by Soviet tanks were audible. Two days later, the men of the patent office fled by foot and reached Eger (Cheb in Czech, now part of Czechia). The next station for the staff was Lichtenfels in Upper Franconia. They were able to take the files with them. They were allowed to use some rooms in the building of the local court there. Some morning, Americans came and declared the files to be seized.

On Saturday, 21 April 1945, the patent office in Berlin was also closed. 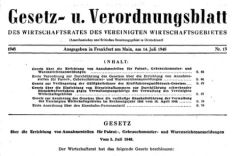 The patent attorney came to a plain conclusion - containing the essentials: "Today the German inventor has practically no place to turn." This statement of the expert was met with a response: on 5 July 1948, the Economic Council of the United Economic Area decided to set up offices where it was possible to file patent, utility model and trade mark applications.

Reconstruction of the patent system in West Germany begins in Darmstadt 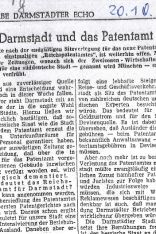 "The German industry's need for secure protection of technical achievement, which was already present at the beginning of the reconstruction and which became increasingly urgent, confirms, also from a practical standpoint, that a modern economy under the principle of job-sharing is indispensable for the positive development of industrial property protection."

Especially the receiving office in Darmstadt received a large number of applications in the period during which it was active (1 October 1948 to 30 September 1949). 56,591 patent applications were filed in the said period in Darmstadt (in Berlin: 4,411). This meant that, in those twelve months, there were even more patent applications than in the last year of peace (1938) at the Reichspatentamt (56,217).

Two inventions filed in Darmstadt then are particularly known to football players and travellers:

The "patent-office-free period" comes to an end ...
... in West Germany 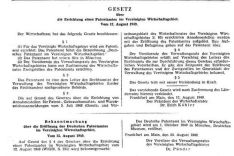 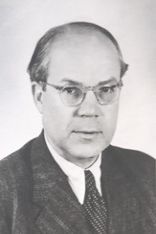 Eduard Reimer, President of the German Patent Office from 1949 to 1957

As early as 28 August 1949, the left library stock of the former Reichspatentamt was brought to Munich, where they moved into an undamaged wing of the building of the Deutsches Museum. The German Patent Office started its operations there on Saturday, 1 October 1949, with 423 members of staff headed by President Professor Dr Eduard Reimer (1896-1957).

Already four months later, on 1 February 1950, the German Patent Office opened its sub-office in the US occupation zone of Berlin: in the building of the former Imperial Patent Office in Gitschiner Straße. 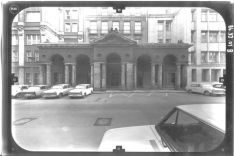 On 6 September 1950, the receiving office became the Office for Inventions and Patents (Amt für Erfindungs- und Patentwesen) of the GDR - with a new seat in Mohrenstraße 37b, which is no less a historic location.

Situated in the former Berlin Konfektionsviertel (clothing district), the building - constructed from 1912 to 1914 and named Prausenhof after its owner Oswald Prause - together with its historical Mohren Collonades was a perfect example of the commercial architecture in Berlin at that time. Today, it is together with further neighbouring buildings the seat of the Federal Ministry of Justice and Consumer Protection. Detailed information about the history of the building complex is available in German at