News from East and West

The legal provisions on intellectual property protection were almost identical in the two German states - owing to the GDR membership of international organisations in the field of industrial property protection. There were differences in the provisions on exploitation. Federal German patents have always given the owner the right to the exclusive use of the invention for a limited time. This right was called “exclusive patent” in the GDR and only accounted for a small number of the patents. More patents were what is referred to as “economic patents”, which had been introduced by the new Patent Act of the GDR of 6 September 1950. For a fee, every state-owned enterprise was allowed to use these economic patents. 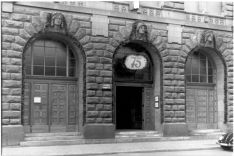 Decorated entrance of the Berlin Sub-Office on 1 July 1952: 75th anniversary of the Patent Office

The Fifth Act on the Amendment and Transition of Provisions in the Field of Industrial Property Protection” (Fünftes Gesetz zur Änderung und Überleitung von Vorschriften auf dem Gebiet des gewerblichen Rechtsschutzes) of 18 July 1953, which entered into force on 1 August 1953, also brought some reforms - or rather “amendments”: new versions of the Patent Act (Patentgesetz), Utility Model Act (Gebrauchsmustergesetz) and Trade Mark Act (Warenzeichengesetz), which were called “Federal versions” were released. Moreover, the transitional provisions of the Design Act (Geschmacksmustergesetz) prescribed that “until further notice” the Patent Office was in charge of registration of designs for authors having neither a residence nor an establishment in Germany. Until 1960, 1,730 applications were thus received at the Patent Office, of which 1,517 (just under 88%) were concluded by registration into the Design Register. During that period 5,049 foreign designs in total were registered.

At the Office for Inventions and Patents in Berlin, two Vice-Presidents directly reported to the President and were each responsible for a department:

Without question: it became cramped in the make-shift office of the German Patent Office in the Deutsches Museum in Munich. While the staff amounted to only 423 when the office was re-established on 1 October 1949, staff numbers grew almost threefold to 1,187 as early as 1951. In 1954, the German Patent Office had 1,809 staff. Until 1953/54, there was a rapid rise in application figures in the three types of IP: patent, utility model and trade mark.

An increase in administrative duties as well as the desire to organisationally separate the judiciary and administrative areas of the Patent Office – which had already been suggested by the then audit court in 1938 – resulted in the first reorganisation of the young federal agency in 1951. Then, the responsibility for the administrative matters of the German Patent Office was transferred from the presidents of the senates to the six sections of the newly established “central department”. 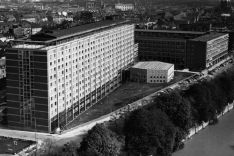 The office building, built between 1953 and 1958 with tower block, search room (centre) and atrium building

Owing to the structural and staff increase of the Patent Office in the early 1950s it was inevitable to look for and plan a bigger office building: the make-shift arrangement at Deutsches Museum with a rented office space of, after all, more than 12,000 square metres was no longer of any use. However, they did not have to look far: literally, only a stone’s throw away from Deutsches Museum, at the other bank of the Isar canal, the new building was constructed on the site of a former military barracks, from 1953 to 1958, which has housed the headquarters of the German Patent and Trade Mark Office (DPMA) in Munich until today. 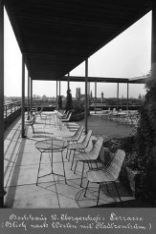 Beautiful view from the roof terrace

The construction of the new building essentially took place in three stages: the first part to be built was what is commonly called the atrium building on Zweibrückenstraße with its spacious inner courtyard. Next was the (public) search room – today a modern conference hall for national and international IP events – with a connecting building.
Finally, the red brick building of Munich architect Franz Hart was added in Morassistraße. This ten-storey tower block was the highest office building in Munich at that time and has remained until today an architectural attraction - also due to its paternoster lift. Proof of the attraction of the complex of buildings, which is now a listed building, is provided by the fact that it has been the location for countless film and television shoots.

The treatment of old IP rights

It is not known whether there were also any structural alterations to the Patent Office of the GDR, the Office for Inventions and Patents, in the early 1950s. However, a subject on which the day-to-day business of the patent offices, in the East and the West, was equally focused was the treatment of old IP rights originating from the days of the former Reichspatentamt.

In the territory of the Federal Republic of Germany, the provisions on the maintenance of old IP rights (old patents, old utility models and old trade marks) were governed by Sections 13 to 18 of the “First Act on the Amendment and Transition of the Provisions in the Field of Industrial Property Protection” of 8 July 1949. Pursuant to Section 15 of this act, a request to maintain the old IP right had to be filed at the Patent Office by the owner or for the owner until 30 June 1950; the period was later extended until 30 September 1950, on the basis of the Second Implementing Regulations (Zweite Durchführungsverordnung) of this act of 14 June 1950. An option that was used by many: in 1950, 76,749 requests for further processing of old patent applications were filed (in addition to the 53,375 patent applications filed at the German Patent Office). Since November 1950, the Berlin Sub-Office was responsible for processing all old IP rights; the branch was established by an order of 20 January 1950 and named “Deutsches Patentamt, Dienststelle Berlin” (German Patent Office, Berlin Sub-Office). At that time, about 130 staff worked at the Sub-Office.

The Patent Act of 6 September 1950 (Sections 69 to 79) formed the basis for the maintenance of old patents or old patent applications in the GDR. Pursuant to Section 70(2) (old patents granted and in force) or Section 77(1) (old patent applications) a request for maintenance or further processing, as the case may be, had to be filed within six months after the entry into force of the act. Patents, granted by the former Reichspatentamt and in force, were included in the GDR Patent Register under the publication number that had been assigned by the Reichspatentamt.

In June 1957, a diplomatic conference on a further revision of the Madrid Agreement Concerning the International Registration of Marks (Madrid Agreement) of 1891 took place in Nice. The then President of the German Patent Office, Professor Dr Eduard Reimer, headed the delegation of the Federal Republic of Germany. Reimer was highly regarded and a renowned expert in the field of industrial property protection and copyright – both, at the national level as well as at the international level. On 5 June 1957, he had a heart attack during his speech in Nice and died, aged only 60. The conference attendees there and the staff of the Patent Office at home were deeply shocked: he was mourned by his wife, three sons and a grand-daughter as well as by the entire IP community.

Ten days later, on 15 June 1957, the Nice Agreement Concerning the "International Classification of Goods and Services for the Purposes of the Registration of Marks" was adopted at the continued conference. Today, it is still also called “Nice Classification” and a revised edition is published every five years. It classifies goods and services in 45 classes in total.
More details on the “Nice Classification” and many texts - including also the Nice Agreement - are available here.

An obituary for Eduard Reimer was also published in the Juristenzeitung (Lawyer’s Journal) by the then State Secretary at the Federal Ministry of Justice, Dr Walter Strauß. The end of the obituary included the following words to honour the deceased: “He was unimpressed by haste and will be remembered by all who had met him for his noble objectivity and his compassionate humanity.”
On the second storey of the main building of the German Patent and Trade Mark Office, directly next to the door of President Rudloff-Schäffer, hangs a portrait of Eduard Reimer by the painter Hans Jürgen Kallmann.
The 60th anniversary of his death was on 5 June 2017.

It was about costs of 445.12 DM – roughly 228 euros. In April 1956, an action for annulment against a decision on costs about this very amount by the First Board of Appeal of the German Patent Office had been brought to the Munich Administrative Court by Stuttgart lawyer Fromut Völp. No, the amount was not the point at all for him. Völp thought that it was utterly unconstitutional that the Patent Office reviewed its own decisions – at final instance and with binding effect – and that it was not possible to appeal to the courts against these decisions. For the lawyer it was worth the money to bring a test case at his own cost to finally put an end to the “decades of dispute over the nature of the patent grant”, as it was later called by Ulrich Hallmann and Paul Ströbele in the publication “Hundert Jahre Patentamt” (One hundred years of the Patent Office). In 1957, the Munich Administrative Court decided in Völp’s favour. Thereupon, the German Patent Office lodged a leapfrog appeal to the Federal Administrative Court in Berlin; the purpose was to clarify the legal position of the office at the highest judicial level. What followed was a big bang: on 13 June 1959, a Saturday, the ruling of the Federal Administrative Court endorsed the legal opinion of Fromut Völp.

Dr Herbert Kühnemann, who succeeded Eduard Reimer as President of the German Patent Office in 1957, called the judgment a “blow against patent protection”. Like many others he thought that this would result in uncertainty and unpredictability for industry and feared that the new legal situation could adversely affect investment in the area of industrial property protection.