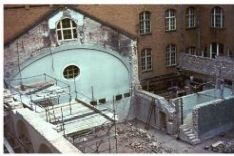 The final reconstruction process of the office building on Gitschiner Straße in Berlin took almost 20 years. In the rooms in the interior of the building, which were accessible to the public, the architectural stylistic elements of the period were conserved. The public search room was at the centre of public attention and completed in 1969. Sufficient space was needed to accommodate the large number of patent specifications, which had increased substantially in the preceding years, and the intention was to allow for the room to be used, as much as possible, in a purposeful and functional way.

Within two years, the search hall, which had to be demolished, was turned into a public search room with modern equipment. 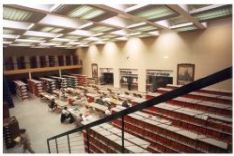 The former plenary hall had been designed in the Neo-Renaissance style according to the architectural preference of the early 20th century: high Venetian leaded windows, plaster ornaments at the ceiling and walls, suspended chandeliers. As late as 1965, the hall afforded just a faint idea of its former splendour, the war had left its mark.

By the way, today, the former plenary hall hosts the cafeteria. 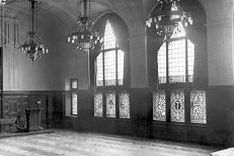 Since extensive expert knowledge is necessary in the field of industrial property protection, it was decided to establish a federal court for industrial property protection matters, consisting of technical judges and legal judges. This also entailed an extensive reform of the appeal proceedings at the office. The then President, Dr Herbert Kühnemann, was in charge of accomplishing it.

The reform was based on the “Sixth Act on the Amendment and Transition of Provisions in the Field of Industrial Property Protection” (Sechstes Gesetz zur Änderung und Überleitung von Vorschriften auf dem Gebiet des gewerblichen Rechtsschutzes) of 23 March 1961. 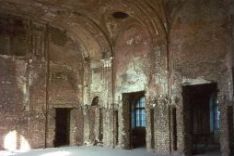 In the late 1950s/early 1960s, there was a need for fundamental structural change. The antiquated organisation of the Reichspatentamt (Patent Office of the German Reich) and the then applicable rules, were not capable of meeting the requirements of the post-war era and the emerging Federal Republic, which directed its attention to Europe and the world. 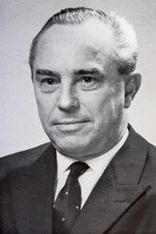 In November 1963, the Bundesrechnungshof (Germany’s supreme audit institution) presented an expert report to the Patent Office, stating that its method of work was not enough forward-thinking. The judgement of the Federal Administrative Court of 13 June 1959, too, had already clearly pointed in the direction of a reorganisation. All areas were affected: operational and procedural principles, administrative structure and processes as well as staff deployment, which should be geared towards success. President Dr Haertel took on the challenge.
First, he established a separate section responsible for organisation; no such section had existed before at the Patent Office. The staff of the section had to enter uncharted territory.

They studied the patent structures of other European countries, finally, the model of the Netherlands convinced them and served as orientation for the reform of the Patent Act. However, after further three years and another expert report of the Bundesrechnungshof, there was still no satisfactory result. The Organisation Section was extended by a planning group, which would succeed in totally redesigning all operational processes of the patent system within two years. This was an ambitious task. Indirectly instrumental in completing that task was a piece of legislation referred to as the “Preliminary Act”.

The Preliminary Act – the “Act Amending the Patent Act, the Trade Mark Act and Other Acts” (Gesetz zur Änderung des Patentgesetzes, des Warenzeichengesetzes und weiterer Gesetze) of 4 September 1967 – for the first time contained the “isolated search”. For a fee an applicant received publications which had to be taken into consideration for assessing patentability of a concrete invention applied for, without a legal evaluation. This option proved to be of interest for experienced applicants, in particular, since it was cheaper. However, identifying and sending out legally suitable publications involved very time-consuming extra work for the German Patent Office. The Berlin Sub-Office was put in charge of this task but, initially, without sufficient staffing. At the ministerial level, it was finally agreed to integrate the staff of the “Treuhandstelle Reichspatentamt”, a trust agency under the authority of the Berlin Senate, into the Sub-Office of the German Patent Office. The personnel increased from 93 staff in 1963 to about 300 on 1 May 1968, including about 45 technical members of the higher civil service. Until the end of 1968, strategies were being developed, processes optimised and, in 1969, at last: the Sub-Office Berlin handled 6,000 to 7,000 search requests annually as from that date.

Meanwhile, the Organisation Section had drawn up a totally new organisation chart, the implementation of which aimed at easing the load of the President and speeding up procedures, among other things. With effect from 1 October 1968, the German Patent Office was organised into four departments and the Berlin Sub-Office.

The new structure was one of the first important steps of the urgent reorganisation. President Dr Haertel recognised the necessity of constant further development and, one year after the act of 4 September 1967, coined the term “Patent Office in transformation”.