The first newly constructed building of the Imperial Patent Office 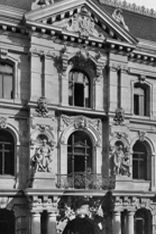 For many years the Patent Office had rented new premises, but this process seemed to have come to an end in March of 1891. The move into its own domicile on Luisenstraße 33-34 raised hopes that the office would be able to master, at least at the spatial level, the constant increase of staff and material.
The new building provided spacious facilities and boasted an impressive design. "The four-wing structure", designed by August Busse, "encompasses a spacious inner courtyard; patent halls and office rooms facing the courtyard are made accessible by circumferential corridors." The sculptor, Otto Lessing, produced the models for the sculptural decorations and the figures; the decorative ironwork was made by Eduard Puls. The style of the building deliberately did not focus on a long-distance effect of the façade but, due to the narrow streetscape of Luisenstraße, it was designed in a way to accentuate the architectural and artistic details, most of which have been preserved.

The library of the new building was exceptional. Its extensive holdings contained 100,000 patent specifications from abroad in addition to 60,000 German patent documents as well as 400 journals and documents relating to other IP rights, which had to be updated regularly. Filling the post of head of the library with a fully-qualified librarian was also exceptional, because, at that time, libraries of authorities seldom had such an expert. 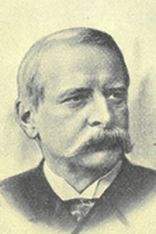 However, only one month after moving into the new building the then President, Dr Victor von Bojanowski - invested with Cross of the Order of the Red Eagle second class with oak leaves awarded for excellence in service, in 1890 - regretfully stated that the 94 office rooms were only just enough to accommodate the staff. The number of staff of the Imperial Patent Office grew from 31 in 1877 to 176 in 1890 and further ten years later reached 600. Renting additional premises in an adjacent building had become necessary.

The experimental rooms for demonstrations next to the offices of the civil servants did not help to solve the space problem. These rooms were fitted with water, steam and gas pipes or were connected to the electricity network of the Berlin Electric Power Company. They were also equipped with instruments used to measure electric current, voltage and resistance. 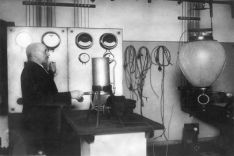 One of the reasons for the steady increase in patent applications was the amendment of the Patent Act in 1891. It was promoted by the chemical industry, which wanted to also obtain protection for the product itself and not only for the process to produce new substances. The "Act Concerning the Protection of Utility Models" (Gesetz betreffend den Schutz von Gebrauchsmustern), which entered into force on 1 June 1891, also led to new applications. In addition, the "Act on the Protection of Trade Marks" (Gesetz zum Schutz der Waarenbezeichnungen) entered into force on 12 May 1894, successor of the "Act on Trade Mark Protection" (Gesetz über den Markenschutz). This resulted in the transfer of the trade mark registration and administration from the locally competent courts to the Imperial Patent Office. This duty, which resulted from the Act and was new for the office, comprised a further area of work, causing a flood of applications so that it became necessary to recruit more staff. In the first quarter, 10,000 trade mark applications were filed, 4,000 of which were received on the first day alone. During the night of 11 into 12 May 1894, applicants queued in front of the Patent Office. Queue jumpers were not tolerated since priority was based on the time. 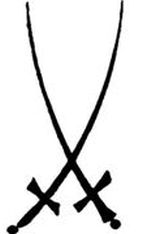 In 1874, Johann Lothar Freiherr von Faber presented a petition to the German Reichstag, aiming to protect his products against being copied and sold more cheaply by others. Subsequently, the "Act on Trade Mark Protection" entered into force on 1 May 1875. The application for the first figurative mark pursuant to this Act, two crossed swords, was filed by the Meissen State Porcelain Manufactory on 20 May 1875.

However, soon it became apparent that the "Act on Trade Mark Protection" was not able to measure up to the requirements in practice, for example, legal protection did not apply to word marks and combined word/figurative marks. In 1894, the "Act on the Protection of Trade Marks" remedied these deficiencies. Johann Lothar Freiherr von Faber's application, seeking protection for his world-famous pencils, was filed by him as early as 13 April 1888. Finally, on 29 October 1894, his famous combined word/figurative mark "Sphinx" was the first registration in the Register: register number DE 43. 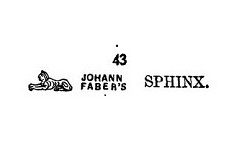 Between 1891 and 1900, the number of patent applications grew by about 11,000 and utility model applications by roughly 21,000; the novelty searches - mind you, without the Internet - relating to these applications constituted a remarkable achievement. The overabundance of duties and the work load involved become clear from a text passage in a memorandum of 1896: "Since the staff of the registry office were by far not enough to cope with the paperwork during office hours, the work had to be done, to a substantial extent, at home against payment."

The revised Patent Act of 7 April 1891 ambitiously aimed at improving the efficiency of the office. This led to changes in the organisational area, such as the splitting and clear separation of the application division and the appeal division, but also in the administrative procedure. The revised Act newly introduced a "preliminary examiner", who was responsible for having the defects of an application remedied before the decision of the application division. The preliminary examination was carried out by a single technically qualified member of the application division. It was not only examined whether the application complied with the formal legal requirements but patentability was also assessed. If the preliminary examination produced the result that the invention was not patentable, a communication was sent to the patent applicant, stating this fact and the reasons for it, inviting them to comment within a prescribed period. If the patent applicant did not reply to this preliminary office action in due time, pursuant to Section 21, the application was deemed to be withdrawn. If the applicant made a statement within that period, a decision was taken by the application division. The preliminary examiner was meant to strengthen the confidence of the applicants in the decisions of the appeal division. Indeed, the number of appeals were reduced by more than half. An important restructuring process in the personnel area was directed at the abolition of the system of part-time members and the introduction of full-time members for life in the patent divisions. Above all, the former "technical assistants", that means physicists, chemists and other staff with a university degree, profited from getting life tenure as senior civil servants. Initially, part-time members still filled most of the posts of the appeal division. However, being a superior instance, they had a higher rank and also a higher salary.

The form of oath for civil servants of the German empire under emperor Wilhelm II was as follows:

"I ...swear to God the Almighty and Omniscient, that I shall be subject, faithful and obedient to His Royal Majesty of Prussia, my Most Gracious Lord, and that I shall strictly fulfil all the duties incumbent on me by virtue of my office, to my best knowledge and belief, that I shall also conscientiously observe the Constitution, so help me God, to salvation through Jesus Christ and His Holy Gospel, Amen."

Finances of the Imperial Patent Office

The growth of IP applications and staff was of course also reflected by the budget of the office. This becomes particularly evident when comparing the years 1891 and 1900. While, in 1891, the income amounted to about 2.5 million marks and the expenditure was just under 1.1 million marks, the income of the year 1900 was more than five million marks and the expenditure roughly 2.6 million marks. This means that the budget surplus had doubled in just nine years. The positive budget of the office was then and still is today a special characteristic, which is by no means a matter of course in the public sector and, therefore, is all the more remarkable. From the establishment of the Imperial Patent Office, the budget income always exceeded expenditure. For example, in 1878, only one year after the office was set up, the income was just under 400,000 marks and expenditure under 300,000 marks.