1986 to 2000: The German Patent Office until the turn of the millennium

The legal texts can be found here:

Article 1 of the “Treaty between the Federal Republic of Germany and the German Democratic Republic on the Establishment of German Unity” (Einigungsvertrag) (Unification Treaty) provided for the incorporation of the territory of the GDR into the Federal Republic of Germany, as of 3 October 1990. The consequences for industrial property protection resulted in the “Act on the Extension of Industrial Property Rights” (Gesetz über die Erstreckung von gewerblichen Schutzrechten) (Extension Act) of 1 May 1992. Section 1(1) provided for the extension of the industrial property rights valid in the Federal Republic of Germany to the new federal states, from the day of unification.
The applications as well as the IP rights already registered or granted, which were in existence in the GDR patent office before accession, were maintained with effect in the former area of protection and processed in accordance with the former legal provisions. 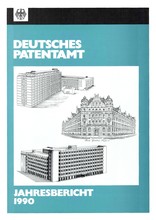 The German Patent Office was now responsible for the examination of IP rights for the entire federal territory of Germany as well as for winding up the patent office of the GDR. This included responsibility for an additional staff of more than 500, about 15.8 million patent documents and an extensive documentation of Eastern European specifications and literature. The Berlin Sub-Office initially received the rank of a department. The roughly 370 staff who had remained in Berlin and were integrated into the federal civil service (among them about 130 patent examiners) performed remarkably well during the integration process. The then President of the German Patent Office, Dr Erich Häußer (1 January 1976 to 30 June 1995), praised her dedication and work performance, and particularly appreciated their technical training and Russian language skills. Initially, the Berlin Sub-Office was primarily responsible for the old stocks of IP applications from the former GDR.

German unification gave rise to hope in many people that the former GDR would quickly become a thriving economic landscape. President Dr Häußer predicted a substantial “increase in IP applications from the new federal Länder”: applications for 8,000 patents, 4,000 utility models, 6,000 trade marks and service marks as well as 2,000 designs. However, statistical data quite soon showed a different reality: the number of applications received was not remotely close to the number expected. Many companies in East Germany had to close down, others relocated their headquarters to the West, their patent applications were attributed to the respective federal Land.

Dr Häußer said in a newspaper interview with Hamburger Abendblatt of 31 March 1992: “We are losing our prosperity in the medium term!” These fears concerned the whole of the federal territory, since Japan and the USA came top with regard to patent applications. According to Dr Häußer, it was true that the Germans did not make fewer inventions than the Japanese and Americans but they less frequently applied for patents for their inventions. The German industry urgently needed to intensify marketing of the innovative strength of its employees.

In President Dr Häußer’s view, the extensive search before filing an application played a great role in determining whether a patent had already been granted for a particular invention. On 11 February 1991, the newspaper Süddeutsche Zeitung reported on a statement of Dr Häußer: “Research institutes and company-owned development departments in Germany are wasting about 20 billion German marks annually because their scientists are trying to invent things that have long since been invented elsewhere.” He emphasised the potential of information as a raw material, which would also have an impact on the prosperity and the jobs of a country and supported the establishment of a German electronic patent database.

The development of the patent information system

As early as 1987, the PATO-LIS-Konji patent database contained more than 15 million patent documents - to which 250,000 were being added annually, allowing searches to be conducted by classification symbol, catchword and name of the applicant. Unfortunately, this almost comprehensive information system did not belong to the German Patent Office but the Japan Patent Office. The United States of America offered similar systems which stored over 90% of the technical knowledge available in databases. In 1986, the patent database of the German Patent Office (PATDPA) was established, which was also intended for use by the public. The “roughly 200,000 data records” are “edited according to the characteristics of the German language, contain selected legal status data and are being supplemented continuously by the latest bibliographies,” reported the newspaper Neue Zürcher Zeitung on 24 April 1986. The PATDPA database, which was of great importance for Germany as a location for industry and attracted a great deal of international interest, was presented in the search room in Munich on 30 June 1986.

At the beginning of 1987, a new Department 5 “Electronic Information Systems” was set up exclusively for electronic data processing. Initially, a cost-benefit study was planned for the patent information system of the German Patent Office. An expert opinion came to the conclusion that “due to the increasing interconnection of technical fields and the flood of new inventions, the office would no longer be able to fulfil its tasks with the conventional means of documentation in the foreseeable future.” Therefore, the development of a fully electronic system should begin immediately.

The Department 5 quickly worked out a rough concept for an electronic search station. This station needed a user interface to facilitate access to the office’s internal and external databases. At the same time, the aim was to comprehensively display the contents of documents, making use as simple as possible. Some amount of necessary fine-tuning was pursued in parallel, such as the electronic implementation of patent searches in various technical, chemical, physical and mathematical fields. However, drawings and formulas still had to be stored in the separate database PATGRAPH. 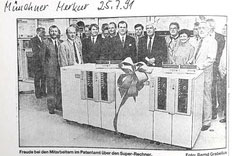 The technical knowledge was at hand, the patent office had arrived at the age of electronic data processing and so, in 1991, a modern mainframe system from the USA was purchased (for those interested: it was a UNISYS 2200/400, operating system OS/1100). The “super computer”, which was awaited with enthusiasm, as the newspaper Münchner Merkur reported on 25 July 1991, was decorated with a “giant bow” as a gift and was personally received by Dr Häußer.

The German patent information system was systematically developed in the following years. In November 1996, the German Patent Office activated its first website, the web address was: http://www.deutsches-patentamt.de and the public was able to obtain information about the office in this way.

In early 1999, DEPATIS was finally ready to start operations. At the beginning, the data of 25 million documents (including 19 million facsimiles) were available. Around 4 million documents were being added each year. The basic configuration of DEPATIS consisted of various components, such as the archive system (stock of documents), the search system (full text search) and a search station (special DEPATIS client with a powerful document display component), which were connected to each other via a fibre optic communication network.

at the German Patent and Trade Mark Office is available in the annual reports of 1991 to 2000, which you can order as PDF file from the central unit Press and Public Relations of the DPMA: presse@dpma.de.

The revision of the Utility Model Act (Gebrauchsmustergesetz), which entered into force on 1 January 1987, led to a big jump in applications. Whereas in 1986 the number of applications was 11,319, as many as 15,677 applications were filed in 1987. This was attributed, for example, to the new option of obtaining protection for inventions regarding utility objects which incorporated circuits. A further increase was based on the new option “to claim, for a utility model application, domestic priority of an earlier patent or utility model application”.

On 1 November 1987, the “Act on the Protection of the Topographies of Microelectronic Semiconductor Products” (Gesetz über den Schutz der Topographien von mikroelektronischen Halbleitererzeugnissen) (Semiconductor Protection Act) came into force. Microelectronic semiconductor products, also referred to as “chips”, are produced using structured layers of semiconductor material, insulating material and metal, arranged one on top of the other. Thereby a three-dimensional structure or topography is created, which is characteristic for the respective chip and which typically also contains the technological know-how of chip manufacturing and miniaturisation. The Semiconductor Protection Act is a means to protect such topographies of chips, if and to the extent that they have unique, non-trivial features (“originality”).

The revision of the Design Act (Geschmacksmustergesetz) in mid-1988 aimed at creating more transparency through central filing of design applications with the German Patent Office and providing better information on registered designs to the public. At the same time, it aimed to fight product piracy more effectively. The procedure for applicants was simplified, since, previously, the applications had to be filed with the respective local courts. Now, the Patent Office was in charge as the central authority. This also ensured the uniform interpretation of the law. In addition, the term of protection was extended from 15 to a maximum of 20 years. On 1 September 1998, the then President of the German Patent Office, Norbert Haugg (1 August 1995 – 31 January 2000), opened the Jena Sub-Office in Thuringia and at the same time established the Technical Information Centre in Berlin, by decree of the Federal Ministry of Justice. The background to this was the

recommendation of the Independent Commission on Federalism of the Bundestag and Bundesrat of 27 May 1992 (in German).

About 200 staff moved from Berlin to Jena in the following work areas: trade marks, designs, Design Register, general administration, organisation, general data processing operation and enquiry unit. At the same time, a “Technical Information Centre” of the Patent Office was set up in Berlin.

1999 saw the beginning of the refurbishment and redesign of the public areas of the Technical Information Centre, the modernisation of its data processing technology and its network connection to the headquarters in Munich. The roughly 80 staff for permanent and 17 staff for temporary tasks who had remained in Berlin worked in the following areas: library/information, distribution of documents, DD patent administration as well as a small administrative area. 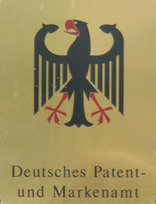 On 1 November 1998, the office was renamed “Deutsches Patent- und Markenamt” (German Patent and Trade Mark Office) to emphasise the increasing importance of the trade mark as an area of work of the DPMA. This was confirmed by the increasing number of trade mark applications: in 1997, the rate of increase was 10.3% (56,992 applications) and doubled to 20.4% (68,610 applications) in 1998. Trade mark protection had become firmly established as an important component of business life in Germany.

Turn of the Millennium

At the beginning of the 21st century, the then President of the German Patent and Trade Mark Office, Dr Jürgen Schade (1 August 2001 to 31 December 2008) felt certain: 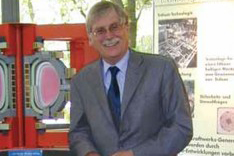 “I am... convinced that we have a good starting position for future international cooperation, which will aim at:

1. reducing the costs for industry,

2. assuring quality and making it comparable and

3. gaining resources for the increasing needs of our knowledge society.

The German Patent and Trade Mark Office will contribute to driving this development forward because it encourages inventiveness and creativity, factors on which we will all be more dependent in the future than ever before.”