Forward to the future

The 1970s were groundbreaking years for the European and worldwide system of intellectual property (IP). An amazing abundance of legal developments initiated the change from the territorial limitation of national IP rights to the European and international system as we know it today. A period of just a few years saw the emergence of the

On 1 October 1974, in his speech on occasion of the ceremony marking the 25th anniversary of the German Patent Office in Munich, the then Federal Minister of Justice, Dr Hans-Jochen Vogel, picked up the topic of the ongoing change: “Based on a great tradition, after brilliant national achievements, the office is about to step into a European future.” The Minister of Justice expressed his best wishes for “happiness and success” and a “work result that benefits Society”. He would not fail to provide his support, said Vogel. 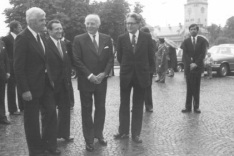 Centenary of the Patent Office: Federal President Walter Scheel (centre) visits the office in Munich on occasion of the anniversary in 1977

In those years, new legislative developments took place in other important areas too: 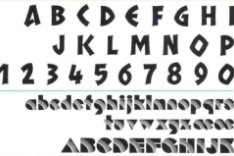 The Type Faces Act of 6 July 1981, brought about changes in the field of design law. Design protection was also introduced for typographical type faces - “new and peculiar fonts (letters and alphabets, punctuation marks, numerals, symbols and scientific signs and ornaments)” - in accordance with the provisions of the Design Act (Geschmacksmustergesetz) of 11 January 1876. Despite the costly and time-consuming development of new fonts, the demand for protection was initially restrained. In 1981, only two applications of typographical type faces with three patterns were filed, one year later ten applications with 64 fonts were filed. In 1985, 36 applications with 108 fonts were filed.

Reclassification in Berlin and change of management in Munich

The Berlin Sub-Office of the German Patent Office essentially contributed to the introduction of the International Patent Classification (IPC) on 1 January 1975. Around 17 million patent documents had to be reclassified at that time, which involved a lot of time and effort. 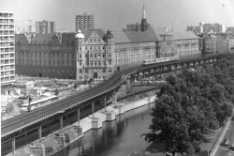 Berlin in 1975: View over Landwehr Canal and the elevated railway to the Sub-Office of the German Patent Office

In addition to the 269 staff of the Berlin Sub-Office, a further 165 temporary employees were hired for this purpose. The result was extremely positive: the importance of the Sub-Office as an important information and service centre in the field of industrial property protection for business and industry in Berlin increased thanks to the reclassified domestic and foreign patent specifications, which were also accessible to the public in the then newly rebuilt, modern search hall. 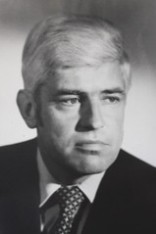 The turn of the year 1975/76 also brought about a change in the senior management of the German Patent Office: Dr Kurt Haertel retired after twelve years as President of the Patent Office. During this productive period, Dr Haertel played a crucial role in the development of the modern intellectual property system. He earned special recognition for his committed and successful participation in drafting all relevant international treaties for industrial property protection and his unconditional support of European integration of the patent system.

He was further honoured posthumously as the "father of European patent law": for instance, in 2002 with the founding of the Kurt Haertel Institute for Intellectual Property, a department of the Faculty of Law at the FernUniversität in Hagen (university for distance-learning programmes), in 2003 with the Kurt-Haertel-Passage, a passage-way in Munich named after him and in 2006 with his admission to the then newly-founded "IP Hall of Fame" - together with Thomas Edison.

On New Year's Day of 1976, President Haertel was succeeded by Dr Erich Häußer. The then only 46-year-old lawyer had previously worked for ten years as a judge at the Federal Patent Court and the Federal Court of Justice (Bundesgerichtshof) in Karlsruhe.

Cuts and motivation: the staff situation in East and West

President Häußer, who skilfully used the Office's Annual Report as an effective publicity tool, repeatedly warned of ever-decreasing staffing levels at his office in this publication of the German Patent Office. For example, in the preface to the 1978 Annual Report, he wrote: "These massive staff cuts lead to a considerable and hardly manageable burden, which could affect the functioning of the Patent Office in the long term.” In the preface to the 1982 Annual Report, Dr Häußer also impressively referred to the development in the field of examiners alone, in the offices in Munich and Berlin: after 651 examiner positions in 1977, only an estimated 601 posts were announced for 1983 - "despite the unchanged workload".

Until 1985, however, there was a continued reduction in staffing levels and the budgetary year ended at the German Patent Office with a target of 2,247 (planned) posts.

However, the massive staff cuts prescribed by the legislator were not the only reason for the tense personnel situation at the German Patent Office. The establishment of the Federal Patent Court in 1961 and the European Patent Office in 1977 took their toll. In the course of 1985, it was indeed possible to again hire 37 "junior examiners of all technical fields", but this did not ease the personnel situation. In that year's Annual Report, Dr Häußer explained the malaise in greater detail than ever before: “New recruits can barely make up for the outflow of staff, which were caused also during the year under review by a transfer of experienced examiners to the Federal Patent Court and of young, well-trained examiners to the European Patent Office. The European Patent Office was therefore asked to exercise restraint in taking on examiners from the German Patent Office and to limit the annual rate to a tolerable level. In this context, it has also been pointed out that the training of an examiner costs about DM 200,000, which must be covered by the budgetary funds of the German Patent Office and thus by the fees for national patent applications."

The earning opportunities at the European Patent Office (EPO) were particularly lucrative for the experts from the German Patent Office. In January 1980, the news magazine DER SPIEGEL (issue 4/1980) reported that members of the Bundestag from the Budget Committee had "discovered absurdities in Munich": according to DER SPIEGEL, for example, an examiner at the German Patent Office (Regierungsdirektor, 45 years old, 2 children) earned a "regular salary" of DM 4,223.56 net. After the transfer "to the neighbouring building", i.e. to the EPO, he received over DM 2,000 net more per month. By 1985, some 200 examiners had moved from the German to the European Patent Office.

At the Patent Office of the GDR, the Office for Inventions and Patents, under the management of President Dr Joachim Hemmerling, great attention was also paid to the personnel situation: It was intended to boost the motivation of staff. For this purpose, the Office for Inventions and Patents acquired a farmstead in Rambow, a small village in today's Prignitz district in the far northwest of Brandenburg, in 1977. The farmstead was converted into a holiday home and, as of the summer of 1978, it served as a reasonably priced holiday option for the staff of the Office for Inventions and Patents. Based on a decision by the GDR Council of Ministers, the office introduced performance-related remuneration for staff in all areas of the office in 1985. The individual, always performance-related salary bonuses amounted to 400 marks (GDR) maximum.

Service for the inventive customer: the German Patent Office strengthens its public relations

In a newspaper interview in October 1977, President Häußer mentioned two things when asked how patent offices could help inventors in Europe: a speedy examination procedure after the filing of an IP application and improved information of the public about the technical knowledge stored at the Patent Office. Dr Häußer stated in the weekly newspaper DIE ZEIT (No. 42/1977) that two-thirds of all applications filed did not lead to a patent because prior art was not sufficiently taken into account. 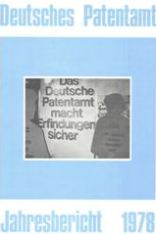 Cover of the Annual Report 1978

Public relations activities of the German Patent Office were noticeably intensified under President Häußer. For example, in early 1978, when the Patent Cooperation Treaty (PCT), signed in Washington on 24 January 1970, entered into force. In order to inform the interested public, the German Patent Office together with the EPO, WIPO, the Federation of German Industries (BDI) and the German Chamber of Patent Attorneys hosted a "PCT Seminar" in Munich, which met with considerable response, attracting more than 550 participants.

During that time too, the Annual Report increased in volume and was also turned into an important instrument for sharing information in dialogue with the customers of the German Patent Office: while the publication still consisted of "manageable" 24 pages in 1978, the volume of the following editions increased continuously - and grew to 78 pages in 1985. By the way, the latest issue of our Annual Report consists of 104 pages... 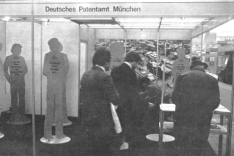 Information stand of the German Patent Office at HANNOVER MESSE 1978

The “efforts to achieve improved public relations", as President Häußer called it in his preface to the 1978 Annual Report of the German Patent Office, were also extremely successful in the trade fair activities, which the office had newly begun. The German Patent Office was represented for the first time at the HANNOVER MESSE in 1978 with an information stand and at the international trade fair iENA (“Ideas-Inventions-New Products") in Nuremberg.

Today, both trade fairs are still "fixed dates" in our annual trade fair calendar, which has meanwhile grown to more than 20 leading trade fairs from all sectors, including many of the world's leading trade fairs. By the way, since 2012 our mobile team has also been present at trade fairs: it provides information to and raises the awareness of exhibitors at their stands about industrial property rights and our services - as exhibitors usually do not have enough time to visit the DPMA stand during trade fairs.

Take a look at this year's trade fair calendar or visit our stand at one of the next trade fairs, for example, in Hall 12 at the iENA 2017, at the beginning of November!

Today, as the fifth largest national patent office in the world, the German Patent and Trade Mark Office (DPMA) is an important cooperation partner at the international level. For almost 40 years we have had a particularly long and extremely fruitful cooperation with the State Intellectual Property Office of the People’s Republic of China (SIPO): This long-standing strategic partnership has contributed to the establishment of the Chinese office and to the continuous development of an industrial property protection system in China. 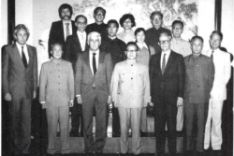 During the beginnings of cooperation, starting in 1981, the offices focused, above all, on technical cooperation and the development of binding standards as well as on the training of patent examiners at the Chinese office. Over the many years of cooperation, this has developed into mutual understanding and close, trusting cooperation. Today, SIPO is the world's largest patent office. Every year, numerous meetings between the DPMA and SIPO on industrial property protection issues take place at working and senior management levels. Since 2008, there has also been a bilateral exchange programme for examiners from both countries, who visit the respective partner office to exchange experience. For preparation and as a good basis for a lively exchange, the DPMA offers Chinese language courses.