Trade marks with an "R": Rodenstock and Roeckl

Rodenstock – pioneer in the field of optics

The Munich-based Rodenstock Group is a global eye health company and manufacturer of spectacle lenses and frames. Founded in 1877, the company employs around 4,900 staff worldwide and has sales offices and distribution partners in more than 85 countries. Rodenstock has production sites at 14 locations in 13 countries. 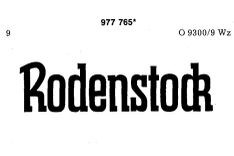 After the First World War, Rodenstock applied for numerous groundbreaking patents in the field of optics and, in 1968, became the pioneer of spectacle lenses in Europe with the first self-tinting lenses ColorMatic. Even today, Rodenstock’s spirit of innovation is still alive: The latest inventions include the ImpressionIST service terminal, which determines all parameters for perfect spectacles, the Ergo spectacle lenses, which are specially adapted to the requirements of everyday office life, and the world innovation from 2011: the eye lens technology (EyeLT), which makes it possible to exploit 100% of one’s individual vision potential.

By the way: The Rodenstock trade mark does not only stand for innovative, lightweight, functional visual aids, but also for fashionable chic: For example, Ro

The Munich trade mark Roeckl has stood for leather goods, especially gloves, in the high-end segment since 1839. The success was based on a tanning process developed by company founder Jakob Roeckl to produce very fine leather. The very high build quality – a Roeckl glove still consists of 24 individual parts sewn by hand with over 2,000 stitches – earned Roeckl the title of “Royal Bavarian Court Purveyor”. Both King Ludwig II and the later Empress Sisi wore gloves made by him. 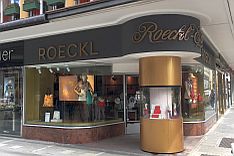 Roeckl building in the centre of Munich

The logo of the company consists of the family name and a stylized hand, which symbolises gloves and handicraft. The company’s products are sold in its stores in Germany and Austria as well as in leather shops, upmarket fashion shops and the accessories departments of fashion houses.