Who doesn’t smile when thinking of the goblin who is up to no good in Meister Eder’s carpenter’s workshop? The creator of Pumuckl, Elisabeth “Ellis” Kaut (17 November 1920 in Stuttgart – 24 September 2015 near Munich), first wrote little stories for the “Münchner Neuesten Nachrichten” newspaper – today’s “Süddeutsche Zeitung”.

Afterwards she was an actress and finally worked as a reporter and author for the Bavarian radio station “Bayerischer Rundfunk” (BR). This is where the idea for the little goblin was born. On a ski tour with her husband she got the name – with snow in her collar he called her a right “Pumuckl” – derived from Nepomuk.

...parts of the title sequence of Pumuckl were shot from the roof terrace of the DPMA office building on Zweibrückenstraße in Munich?
By the way, Meister Eder’s carpenter’s workshop is located in the immediate vicinity of the DPMA in a backyard in the Lehel district of Munich.

In 1961, Pumuckl made its radio premiere in the BR – a total of 90 episodes were broadcast. Hans Clarin was the typical voice behind Pumuckl. From 1969, the radio plays were produced on record and cassette.

But is it possible to try to image what the little goblin would look like? Ellis Kaut organised a painting competition on how Pumuckl should look, which was won by 21-year-old Barbara von Johnson. She created the unique figure with the protruding ears, the fat belly and the oversized hands and feet. From 1965, she illustrated the Pumuckl books. 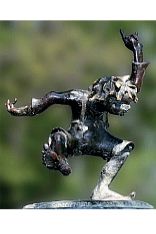 In 1982 the feature film “Meister Eder and his Pumuckl” with Gustl Bayrhammer in the role of Meister Eder was released; shortly thereafter the television series followed. Ellis Kaut’s son-in-law, Brian Bagnall, created the cartoon character in bright colours – according to the wishes of the Jewish director, who had emigrated to Brazil during the Third Reich. The trade mark rights to this Pumuckl were obtained by the daughter of Ellis Kaut, Ursula Bagnall (word mark DE 1012772, Pumuckl, applied for on 31 March 1979 for classes of goods 38, 9, 35, 41 and 42) and BR (word/figurative mark DE 1021098).

From then on, Brian Bagnall illustrated the Pumuckl not only on screen, but also in children’s books. Barbara von Johnson felt that her copyright had been violated and went to court. In 2005, at the end of the lawsuit, she received a compensation, subsequently.

In total, Pumuckl was sold about 10 million times on record, cassette and video. Pumuckl musicals, including that at the Gärtnerplatz theatre, and further TV series as well as a feature film were produced. There is even a Pumuckl fountain in the Luitpold park. 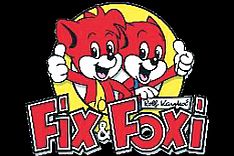 The comic figures of the two foxes conquered the children’s rooms from the 50s onwards. With a total circulation of 780 million copies, Fix&Foxi is, according to the company, the most successful German comic series. At peak times, the circulation was 400,000 copies per week.

The publisher Ralf Kauka (9 April 1917 in Markranstädt near Leipzig – 13 September 2000 in Thomasville, Georgia, USA) founded the comic publishing house in Munich in 1950. In 1953, the comic “Till Eulenspiegel” appeared.
The two foxes emerged for the first time in the 5th issue, in which the fable of Reynard the Fox was incorporated. In 1955, the comic book was renamed “Fix&Foxi”. Dorul van der Heide was the first illustrator of the figures, further illustrators followed.

Kauka is also known as “the German Walt Disney”. Some characters of “Fuxholzen” (Foxburg) resemble the figures from “Entenhausen” (Duckburg). Fix and Foxi are also supposed to convey basic educational values: They are open-minded, committed and caring. In 1961, Kauka developed the Fix&Foxi logo with Rolf Kauka’s name in handwriting; it was only at a later date that it was protected as a trade mark.

Kauka dedicated the last years of his life to converting Fix and Foxi into a cartoon series that was first shown on German television in February 2000 (in the ARD and KiKa channels). In 2010, the comic book was finally discontinued after various sales and repurchases of the publishing houses and licenses.

Now there is a “Fix&Foxi adventure land” at the Ravensburger Spieleland amusement park; in 2013, a children’s day care centre named “Fix&Foxi” was opened in the Grünwald district of Munich.