From family business to global player: ARRI and Linde

ARRI – these are the initial two letters of the surnames of August Arnold and Robert Richter. The two had already gathered some experience as filmmakers during their school days and founded the Arnold & Richter company on 12 September 1917. The business focussed on filming and the operation of a chemical laboratory for photography and films. They earned money through cinematographic work, film presentations and mechanical work. ARRI became famous through the development of film cameras: In 1937, the reflex mirror shutter was introduced, making it possible to see the exact image detail and depth of field distribution through the optical viewfinder avoiding parallax errors. The word mark “ARRIFLEX” (DE 757410), applied for on 14 July 1960 for “film cameras”, is still valid today. The 16mm camera ARRIFLEX 16 is legendary. It was produced an estimated 20,000 times for almost four decades, between the early 1950s and the late 1980s. 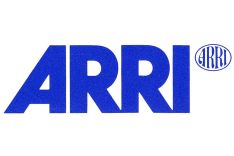 Today, the ARRI Group is a global enterprise with around 1,500 employees worldwide. In addition to its headquarters in Munich, ARRI has subsidiaries in Europe, North and South America, Asia and Australia. The ARRI Group consists of the five divisions “Camera Systems”, “Lighting”, “Media”, “Rental” and “Medical”. ARRI is a leader in the development, manufacture and marketing of camera and lighting systems for the film and television industry with a global sales and service network. In addition, ARRI is an integrated media service provider in postproduction, co-production and worldwide distribution of films as well as camera, lighting and stage rental. ARRI’s Medical division focuses on the use of ARRI core technologies in medical technology.

Linde – founded by the “Pioneer of refrigeration technology”

“Cooling and freezing is Linde’s business,” this is what the word mark DE 972851 reads. The name “Linde”, which stands for the founder of the company and “pioneer of refrigeration technology” Carl von Linde, is the element of the trade mark that can be protected. The company’s origins also have to do with Munich beer. In 1873, for example, a refrigerating machine based on Linde’s ideas was installed on a trial basis in the Spaten brewery. In 1877, Linde was granted the patent number 1250 of the German Reich for an improved machine. In 1879, the “Gesellschaft für Linde’s Eismaschinen AG”, founded in Wiesbaden in Germany, initially supplied beer breweries and later also ice factories, slaughterhouses and chemical plants.

After the foundation of the company, Carl von Linde gave up his position as a civil servant and professor at the Technical University of Munich. From 1891, Linde began to develop the process for separation of air, named the Linde process after him.

The Linde company has also been based in Pullach in the south of Munich since 1900: The Höllriegelskreuth division was established as a test station for the separation of air into nitrogen and oxygen. Pullach is currently the location for the Linde Engineering Division, which plans and builds turnkey process engineering plants. 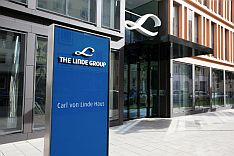 Corporate headquarters in Munich: the modern Linde Group logo based on the “L” in Carl von Linde’s signature

In 2008, the head office of Linde AG was relocated from its historic headquarters in Wiesbaden to Munich; the new company headquarters are located in the Angerhof building in downtown Munich; the group’s new name is The Linde Group.

Today, Linde plc (public limited company) is a publicly traded, multinational technology company based in Dublin with operational headquarters in Guildford, UK. It was formed in 2018 by the merger of the German Linde AG and the US competitor Praxair, originally also founded by Carl von Linde and confiscated during the First World War. Its core business is gases and processing plants that extract or produce gases. Linde is the world market leader in industrial gases, ahead of its French competitor Air Liquide. The company employs around 80,000 staff and serves customers in more than 100 countries around the world. Linde has around 7,000 employees throughout Germany, including 5,000 in Bavaria. In 2004, however, the refrigeration division was sold, so that refrigeration appliances are no longer being produced under the name “Linde”.