He is world-famous as the "father of aviation": Otto Lilienthal, who died on 10 August 1896. The day before, after numerous successful flight attempts, he had crashed with a glider he had built himself. It is less well known that Lilienthal also was a versatile inventor and engineer who, together with his brother Gustav, registered a number of interesting patents in various fields.

Otto Lilienthal is one of the most important figures in the history of aviation. He researched the theoretical principles of flight and put them into practice. Lilienthal practically gave the starting signal for the rapid development of aviation from the turn of the century onwards. 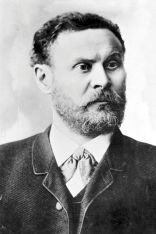 Flying was Lilienthal's childhood dream. Born on 23 May 1848 in Anklam, he used every spare minute from an early age to study the flight of birds. Whether at the grammar school in Anklam, during his studies in mechanical engineering in Berlin, as an engineer in a machine factory or later as an independent entrepreneur- Lilienthal always researched and experimented on the secret of flight along the way.

Before he made his world-famous flight experiments, Lilienthal was successful as a constructor: Together with Gustav, he designed a "Schräm-Maschine mit Messerscheibe" for coal mining for the company C. Hoppe (

DE2291). He invented a siren foghorn for lighthouses, a new method for draining waste water ( 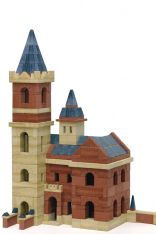 An Anker brick building set, as it is sold nowadays

The two brothers also developed a system toy made of building blocks, the basic idea of which is still very successfully marketed today by manufacturers such as Lego or Fischertechnik. In 1880, the brothers applied for an American patent for it (

US706689) and trademarks, did extensive marketing and made the architectural toy produced in Rudolstadt a world success.

Later, the Lilienthals took up the idea again. Otto again applied for a patent for a model kit in 1888 (

DE46312). A legal dispute ensued with Richter, from which the latter ultimately emerged victorious. Under the name "Anker-Steinbaukasten" (DE word mark 2011940), the toy was on the market until the 1960s. Production was resumed in 1995. The manufacturer Ankerstein Gmbh (today owned by Arbeiterwohlfahrt Rudolstadt) advertises it as the "oldest system toy in the world". 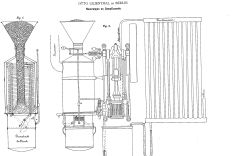 The legal dispute with Richter seems to have cost the Lilienthals a lot of money and energy. However, Otto filed two patents in the early 1880s that put them back on the road to economic success: "Innovations to steam boilers" (

The success also showed Otto Lilienthal's human greatness: the sporty, artistically and socially committed entrepreneur gave his workers a share of the profits, supported a theatre financially and also wrote an

Birds as a role model 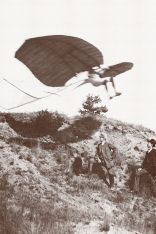 Flight test at the Mühlenberg in Derwitz 1891, photographed by Carl Kassner

Along the way, Gustav and he continued to work ceaselessly to understand the laws of flight. They carried out systematic air resistance measurements on models and built flapping wing apparatus. Otto published the findings from the years of research in 1889 in his book "

Der Vogelflug als Grundlage der Fliegekunst"- a milestone. Some of the findings set the standards to this day. With a "polar diagram" Lilienthal recorded the relationships between lift, drag and angle of attack of different types of wings and recognised the importance of the flat curved wing profile. And he came to the conclusion: "Nature proves to us every day anew that flying is not that difficult".

But he did not stick to theory only. Lilienthal put his findings into practice and built his first gliders out of willow and cotton. The first tests with self-built gliders took place in 1889. In June 1891, he jumped with his hang glider from the Mühlenberg near Krielow (near Potsdam) and glided about 15 metres - the birth of aviation.

Pictures that went around the world 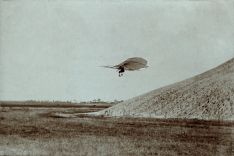 Lilienthal made sure that his flight attempts were well documented photographically. Other aviation pioneers failed to do so; for example Gustav Weißkopf (Whitehead), who claimed the first powered flight for himself but could not prove it with a photograph. Thanks to the spectacular photos of his jumps and flights, Otto Lilienthal became world famous. He inspired inventors and flight enthusiasts around the globe.

Lilienthal had a "Fliegeberg" (flying hill) heaped up near his home in Berlin-Lichterfelde especially for his experiments (today a memorial). Paul Beylich, Lilienthal's co-worker on the flying machines, later recalled: "When we did our experiments, the Berliner Lokalanzeiger newspaper wrote: 'If you want to see two crazy people, you have to go to Lichterfelde.' Lilienthal with his mechanic, they want to fly. The Berliners came out in droves on Sundays. And then they watched us. And we always flew right over them". 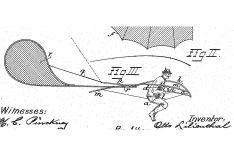 Note the feather on the hat: US patent for Lilienthal's "Normalsegler" (US544816)

In 1893, Lilienthal flew up to 250 metres in the Rhinow mountains - a record that no one broke for a long time.
Soon, thanks to their experiments, the Lilienthals had created a suitable flying machine, which they called the "Normal-Segelapparat". This monoplane had a wing area of 13 square metres and a wingspan of 6.7 metres. It was produced at the "Maschinenfabrik Otto Lilienthal" and found several buyers from all over the world. The foldable "Normal-Segelapparat" was thus the first serial-produced aircraft in the world. Lilienthal applied for a patent (

Poster (1,63 MB) in the DPMA Inventions Gallery is dedicated to the "flying apparatus".

However, the glider was difficult to handle: The pilot hung in the middle of the device like a living joystick, because the glider could only be steered by moving the legs and shifting the weight. The pilot supported himself with his arms and clung to the frame with his hands - an enormous effort. Five of these flying machines are still preserved worldwide.

Later, Lilienthal also experimented with pre-wings, a movable tail unit and swinging flaps at the wingtips. He also successfully tested biplanes. He thought about powered flight. He is said to have constructed 21 different flying machines. Otto Lilienthal undertook around 2000 flight tests. It is estimated that he spent a total of five hours in the air.

But then came August 9, 1896. On the Gollenberg in Stölln near Rhinow, where he had preferred to fly for two years, Lilienthal caught a "solar gust", a thermal separation, during his fourth flight of the day. He crashed his normal glider from an altitude of about 15 metres. "I just want to rest a bit, then we'll go straight on," the seriously injured pilot is said to have murmured. He was transported unconscious to Berlin, where he died the next day.

„Of all the men who attacked the flying problem in the 19th century, Otto Lilienthal was easily the most important“, motorflight pioneer Wilbur Wright wrote in 1912. „The world owes to him a great debt.“