The lady and the calculator

On 18 October 1871, an all-round genius died who is now considered the "father of the computer": Charles Babbage. His "Analytical Engine" anticipated many features of modern computers. But hardly anyone recognised the true potential of this invention at the time - except Ada Lovelace, who wrote the first programme for the computer. Long after their deaths, Babbage and Lovelace are honoured for this as the pioneers of computer science and are still cited in numerous patent specifications (most recently, among others,

Babbage, who was born in London on 26 December 1791, was a multi-talented scientist. He came from a wealthy family and studied mathematics and chemistry at Trinity College in Cambridge. There he founded an "Analytical Society", later also the "Royal Astronomical Society". In 1827, he took over the prestigious Lucasian Chair of Mathematics at Cambrigde, which Isaac Newton, among others, had previously held. But Babbage was not very committed to teaching, because he had another goal: he wanted to construct a powerful calculating machine.

At that time, a great deal of calculation was needed in astronomy and consequently in navigation for seafaring. The fleet was the lifeline of the British Empire. Multi-digit logarithms had to be calculated by hand, typeset in the printing press and output as charts - a very error-prone procedure. And errors in ship navigation could be fatal. So Babbage dreamed of a machine that could both calculate and print. 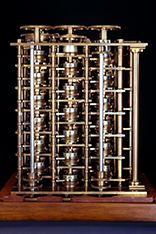 He had been working on a "Difference Engine" since 1821. He presented his ideas in 1822 under the title "Note on the application of machinery to the computation of astronomical and mathematical tables" in the journal of the Royal Astronomical Society.

This "Difference Engine" was to be an automatic mechanical calculating machine that could tabulate polynomial functions and calculate logarithmic and trigonometric functions. It was to have a capacity of 20 decimal places and a working memory. The discrete digits were represented decimally by positions on gears (rather than binary digits, i.e. "bits").

In order to design something like this, Babbage inevitably had to deal intensively with mechanical engineering processes. Nevertheless, his ideas overtaxed the precision mechanical skills of his time. The costs also got out of hand, as Babbage constantly optimised and further developed his plans. But he repeatedly succeeded in convincing the British government to invest in his project. In 1832, a partial model operated by a hand crank and consisting of around 2000 individual parts was completed as a prototype, which is now in the Science Museum in London.

But after a dispute between Babbage and his engineer Joseph Clement, the project failed. The room-sized "Difference Engine" should have consisted of up to 25,000 parts. For the money that the British government had put into the engine by 1834, it was said that about 20 locomotives could have been built at the time. Babbage had also invested part of his inherited large fortune in the engine.

Incidentally, Charles Babbage was not only a mathematician and inventor, but a true multi-talent. Through statistical calculations, he provided life insurance companies with a scientific basis for calculation. He worked on encryption techniques, contributed to the modernisation of the British postal system and invented the ophthalmoscope and the "cowcatcher" for locomotives. He fought fraud and forgery in the scientific community as well as noisy street musicians. He also analysed work processes in factories and developed the "Babbage principle", according to which a specialised division of labour can reduce labour costs. Karl Marx referred to it in his "Das Kapital".

Concept of the "Analytical Engine“ 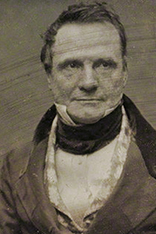 The end of the "Difference Engine" was bitter for Babbage, but he was already working on an even more comprehensive and daring project: the "Analytical Engine". Its capabilities were to go far beyond those of the "Difference Engine". The calculator, which Babbage first sketched in 1837, was to anticipate the basic components and logical structure of modern computers. Its memory unit was to be large enough to store a thousand 50-digit numbers. It was not until around 1960 that computers with a higher storage capacity could be built!

Its complexity surpassed anything that had ever been built in scientific apparatus up to that time. Its dimensions, too: about 55,000 parts would have been needed; the computer would have been longer than a wagon and 3 metres high. A steam engine was to drive it. It was planned to control the computing operations by means of punched cards - similar to the used in the automatic looms invented by Joseph-Marie Jacquard in 1801.

Lady Lovelace recognises the potential of the calculator 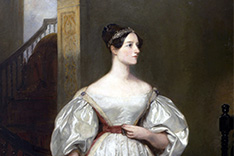 Among the few people who understood Babbage's masterpiece was Ada Lovelace. Born Augusta Ada Byron King in London in 1815, she was the daughter of the scandal-ridden poet Lord Byron and the mathematically gifted Anne Isabella Noel. As a child, she was enthusiastic about inventions and devised flying machines. She received lessons from the famous mathematician Augustus de Morgan, who recognised her talent, but nevertheless did not give her due support because he considered women fundamentally unsuitable for the sciences.

At 17, the self-confident Ada met Babbage. She recognised the enormous potential of the "Analytical Engine" - perhaps even better than Babbage himself. She once wrote to him that she did not think he possessed even half of her foresight and her ability to see all possible eventualities.

The engine „might act upon other things besides number, were objects found whose mutual fundamental relations could be expressed by those of the abstract science of operations, and which should be also susceptible of adaptations to the action of the operating notation and mechanism of the engine“, she wrote in her famous "Notes" on the apparatus. 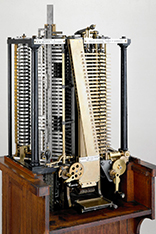 The realisation that the machine could process more than just numbers if the rules of other objects were formalised for it was revolutionary and was probably only understood by very few people during its lifetime. Lovelace formulated the basic idea of computer science here: the systemic processing of information.

Lovelace gives a concrete example in her visionary interpretation of the possibilities of the programmable machine: „Supposing, for instance, that the fundamental relations of pitched sounds in the science of harmony and of musical composition were susceptible of such expression and adaptations, the engine might compose elaborate and scientific pieces of music of any degree of complexity or extent.“

Too far ahead of their time 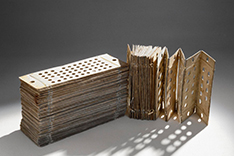 Punched Cards to be used in the "Analytical Engine"

In her notes to the "Analytical Engine", there is also a plan of how Bernoulli numbers could be calculated with the help of this "hardware". The instruction contains the arithmetic commands and the storage locations of all intermediate results and is therefore considered today to be the first "software", the first computer programme.

However, she did not see an artificial intelligence in the machine, since it had "no capacity for recognising analytical relations or truths". Computer pioneer and "Enigma" cracker Alan Turing discussed this limitation a century later as "Lady Lovelace's Objection" in a famous essay that brought Ada back into the view of science. This question and the topic in general are more burning today than ever. 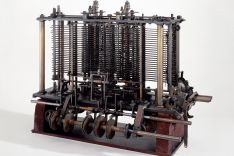 Another part of "Analytical Engine"

The "Analytical Engine" would have been the first mechanical universal computer, but it was never completed, although Babbage worked on it to his end. It was not until 1941 that Konrad Zuse was to build the first general-purpose computer, the Z3 - more than a century after Babbage.

Lovelace died as early as 1852, Babbage in 1871. Neither were allowed to see them celebrated as pioneers of a technology that would dominate the world 150 years later.