World Day of the Bicycle

An invention with a great history - and even greater future

The baron Drais would have been delighted: June 3rd is the

World Day of the Bicycle . With this the United Nations pay tribute to the "uniqueness, longevity and versatility of the bicycle". For two centuries - in other words, since Karl von Drais' first trip with his "walking machine" in Mannheim - it has been a „simple, affordable, reliable, clean and environmentally fit sustainable means of transportation“, according to the UN. With the World Day, it also wants to emphasize that the needs of cyclists and pedestrians "continue to be overlooked" in many places.

There is no question that cycling has considerable social, economic and environmental benefits. Around half of all inner-city car journeys are under five kilometres long. According to estimates by the German Ministry of Transport, 7.5 million tonnes of CO2 could be saved each year if the bicycle were used instead of the car for 30 percent of car journeys in cities under six kilometres.

The World Cycling Day is therefore intended on the one hand to draw attention to the increasing traffic problems caused by motorised means of transport, but on the other hand to celebrate the bicycle as an environmentally friendly and healthy means of transport. 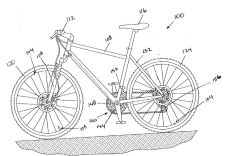 Let's look back at the origins of the bike on World Bicycle Day. Everything began in the German region of Kurpfalz. The citizens of Mannheim were quite astonished on that 12th June 1817: Someone roared through their streets on a wooden frame with two wheels, without any horses at all! Karl Freiherr (Baron) von Drais introduced them to his latest invention: a "walking machine". It was the first steerable, muscle-powered two-wheeler and thus the direct predecessor of our bicycle of today.

On this summer day, Drais rode with his „running machine“ the almost 15 kilometres long distance from Mannheim to the Schwetzinger Relaishaus and back in only one hour. That was faster than the stagecoach and a real sensation. Drais became famous over night. His „running machine“ was often called "Draisine" in honour of the inventor.

On January 12, 1818, Drais received a ten-year Grand Ducal privilege from the ruler of Baden for his walking machine, which would be equivalent to a patent today. Weighing about 50 pounds, the ash wood trolley was not much heavier than modern steel-framed bicycles. It already had a folding stand, luggage rack and brakes. Today, a preserved Draisine can be viewed at the

Deutsches Museum in Munich, in the immediate vicinity of the DPMA.

Industrial property rights difficult to enforce at that time 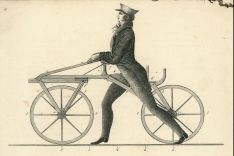 Construction drawing of the "Draisine“

Thanks to the Grand Ducal privilege, every draisine in Baden had to carry a Drais licence badge on the handlebars. Drais also received a "Brevet" in France. But despite the "privilege" Drais had to experience how his invention was copied and sold without permission. Others applied for a patent for Drais' invention in the USA or Great Britain. The Baron therefore earned very little from his invention. At that time, intelelctual property protection was still in its infancy and usually ended at the numerous national borders of the Central European small states.

The rip-offs sometimes lacked a brake, which led to accidents and damaged the reputation of Drais´ invention. Soon several cities (starting with Mannheim) were forced to issue a ban on using hobby-horses on pavements. However, the early bikes did not run well on the mostly very bumpy roads at that time. After a short boom the enthusiasm for the „walking machine“ ebbed away again. This was partly due to the fact that its inventor, who had initially "promoted" the invention intensively with various publicity trips and performances, went to Brazil in 1822 as a surveyor for a few years.

A volcanic eruption and the consequences 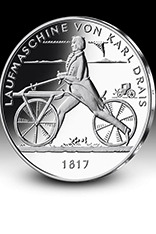 Drais may have been inspired by the "year without summer" in 1816 to invent a means of transport without horses: As a result of the eruption of the Tambora volcano in Southeast Asia the year before, the northern hemisphere experienced a temporary climate deterioration with rain and cold; failed harvests and a shortage of oats followed. The people often could neither feed themselves nor their horses and therefore preferred to eat them. So it was obvious to think about a means of transport without draught animals. On the 2017 20-Euro anniversary special coin minted in Drais' honour, a volcano can therefore be seen in the background. However, this connection has not been proven, because as early as 1813 Drais had applied (unsuccessfully) for a patent for a crank-operated "carriage without horses". In addition, there had already been a series of wet summers with failed harvests before the Tambora eruption.

One of the first free inventors 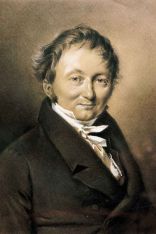 Drais, born 1785 in Karlsruhe, was godchild of the Baden Grand Duke. In 1808 he became forester, but two years later he was released from his duties with full pay so that he could concentrate fully on his inventive activities. In 1818 he was also appointed professor of mechanics.

The Baron was an innovative mathematician and versatile inventor: among other things, he developed a musical notation machine that wrote down what was played when performing on the piano, a typewriter, a wood-saving stove and a cooking machine. Nevertheless, towards the end of his life, Drais was considered more of a failed "crazy inventor" than a technical innovator.

Isolated in the end 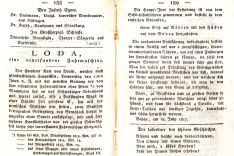 The fact that Drais was increasingly isolated socially in his later years also had political reasons. His father, the Baden privy councillor and high court judge Karl Wilhelm Ludwig Friedrich von Drais von Sauerbronn, was involved in the death sentence for Karl Ludwig Sand in 1820. Sand, a radical student union member, had murdered the writer August von Kotzebue in Mannheim, whom he considered a "traitor to the fatherland". Nationalist students therefore saw a hero in Sand and opposed his judges and their families. Drais' father is said to have advised his son to hide away in Brazil because of this.

On the other hand, Drais later made himself unpopular with the traditional, restorative authorities who had always protected him. In the "Vormärz" and the March Revolution of 1848, Drais professed his support for the democratic forces and renounced his title of nobility. For this reason, it is said that even a procedure of incapacitation was brought against him. When he died in Karlsruhe in 1851, he was completely impoverished, he was met with hostility or ridicule from many sides and practically ostracized socially.

The most common vehicle in the world 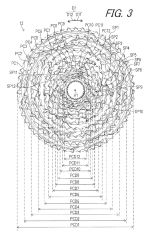 It was not until a long time after his death that the appreciation of his pioneering achievements began. In the following decades after Drais' patent, some decisive technical developments such as the pedal crank drive for the rear wheel, the air-filled tyre or the low-wheel frame construction ensured that the bicycle took on the shape it still has today.

Today it is by far the most common vehicle in the world, with an estimated one billion examples; in Germany alone there are said to be around 70 million "Drahtesel". Nevertheless, „running machines“ are still very popular today - especially with small Children, but recently also as a walking aid for seniors.

In the DPMA patent database DEPATISnet you can search all German patent specifications and also the documents of the most important patent offices and organisations worldwide relating to the topic "bicycle". In the IPC area B62M1 alone, you will find thousands of patent specifications. To this day, the bicycle - additionally boosted by the e-bike boom - is constantly being further developed, as a small glance at new applications at the DPMA shows; for example

Another historical trip from Mannheim

A good 80 years after Drais' first trip with the running machine, another historic journey was to begin in Mannheim as well: Bertha Benz´ tour with the "Patent-Motorwagen No.3" of her husband Carl, with which the age of the automobile began.