Recipes for the summer of 2021

Dwell in the land, and deliciously you shall be fed

In the second summer of the pandemic of 2021, travelling has not been quite so easy. So it may definitely be a good idea to spend the holiday in one’s home country. And sometimes a “culinary journey” may also be quite exciting. For this purpose, we have compiled a few suggestions for you: Taste delicious specialities from all over Germany – from

"Schwarzwälder Schinken" (ham). All these food products and many more are protected as geographical indications, 91 for Germany alone. A total of 1,561 agricultural products and foodstuffs are registered in the

register of the European Commission (not counting wines and spirit drinks). 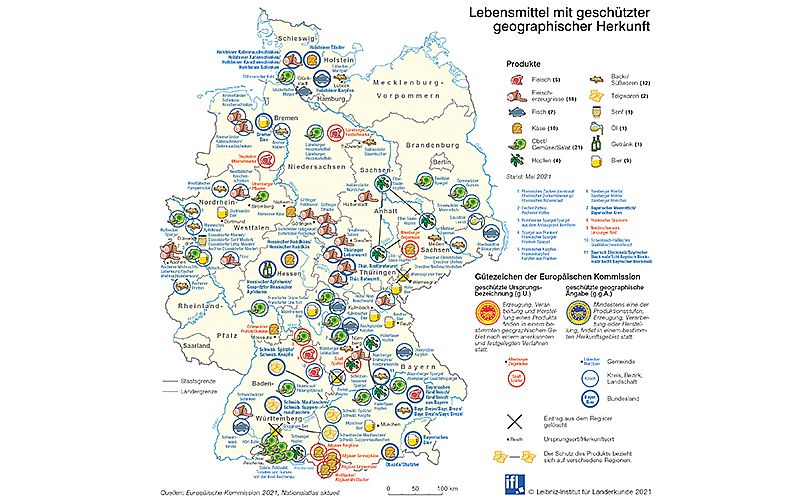 "It is Sunday, and the silence we encounter does not reveal anything of the lively traffic that usually prevails here. The Spreewald products have their most exquisite storage place in Lübbenau and it is from here that they go out into the world. Among these products, cucumbers are at the top of the list," wrote Theodor Fontane about a component of our starter in his travelogue "Wanderungen durch die Mark Brandenburg" (Rambles through Brandenburg) as early as in the 1870s. He refers to the

"Spreewälder Gurken", (pickled cucumbers), which have been grown in the region for centuries. You can also taste the Spreewald on the "cucumber cycle path", a circular tour of about 250 kilometres, true to the motto "Always follow the cucumber". 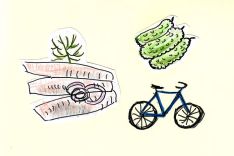 On our journey, the cucumber meets the

"Glückstädter Matjes" (soused herring), turning it into a delicious appetiser. In Glückstadt on the lower Elbe river, the tradition of producing Matjes (soused herring) can be traced back to 1893, when the Glückstadt herring fishery started. Every year on the second Thursday in June, the Glückstadt Matjes Weeks begin here with the traditional Matjes bite. The entire production process must be carried out in the urban area of Glückstadt. Production takes place all year round. More information about “Glückstädter Matjes” is available on the website of the

First course: Potatoes from the Lüneburg Heath with sausages from Halberstadt 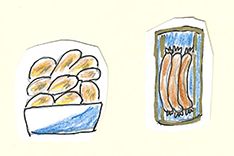 The harvest season for the

"Lüneburger Heidekartoffeln" (heath potatoes) starts in August. The cultivation of potatoes has a long tradition in the Lüneburg Heath. Since the mid-19th century, the region has been the largest potato-growing area in Germany. Thanks to the sandy soils, the heath potato grows particularly well in the Lüneburg Heath. To make sure that you always get the best potato, the European Commission added the potato to the list of protected geographical indications of foodstuffs on 4 August 2010. Only producers from the region of the Lüneburg Heath are still allowed to use the term "Lüneburger Heidekartoffel". We serve a tasty potato soup made from them with

"Halberstädter Würstchen"(sausage). In the GDR this was a popular product, which was sold under the counter. It has had protected geographical indication status since 2010. The “Halberstädter Würstchen” too has a long and interesting history. For example, it is said that Friedrich Heine, a master butcher from Halberstadt, invented the canned sausage in 1896, see

"Wie kommt das Würstchen in die Dose" (“How does the sausage get inside the can?” ) on the municipal website of Halberstadt. 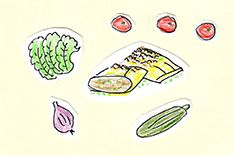 The story goes that Maultaschen were invented at the Swabian monastery of Maulbronn, on Maundy Thursday more than 500 years ago. Since it was a sin and actually forbidden to eat meat during the Holy Week, the meat was concealed from the stern eyes of the Lord under the pasta dough of the Maultaschen – and nonchalantly enjoyed.

Kloster Maulbronn was named a UNESCO World Heritage Site and is definitely worth a visit. Since 2009, the

"Schwäbischen Maultaschen" have been registered as a protected geographical indication.

"Tomaten von der Insel Reichenau". to go with the salad. The geographical area covers the Reichenau island in Lake Constance, whose vegetable-growing tradition dates back to the monastery culture around 849. Thanks to its location the island, also often referred to as the “vegetable island”, has special geographical and climatic conditions, as Lake Constance is a reservoir of water, light and heat. The

Klosterinsel Reichenau is also a UNESCO World Heritage Site and since 1991, the former herb garden – replanted to the original design – has again been open to visitors.

Cheese rounds off a meal 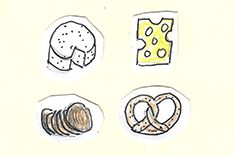 To finish off the multi-course meal, we recommend a delicious cheeseboard: ten German cheeses are protected. For example,

"Obazda". What could go better with it than a Bavarian pretzel

There is also many a story about the "Bavarian pretzel". The people of Munich claim to have invented the pretzel. Legend has it that the first soft lye pretzel was eaten on 11 February 1839: On that day, Wilhelm Eugen von Ursingen, a Royal Envoy from the Württemberg court, wanted to have breakfast at the café in Munich’s Residenzstraße, owned by Eilles, a purveyor to the court. Pretzels already existed at that time, but they had a sweet flavour. It is said that instead of using sugar water, the baker Anton Nepomuk Pfannenbrenner accidentally coated the pretzels with soda lye – which was actually intended for cleaning the baking sheets. When the fresh pretzels came out of the oven, they had a brown crisp crust and smelled and tasted wonderful. The pretzel is a cultural heritage item in Munich and as such it even made it to the museum. A few years ago, the Munich City Museum dedicated an exhibition to the pretzel. More information on the pretzel is available at the 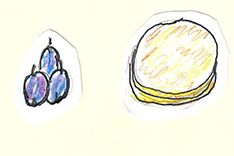 Well, how does the saying go: "There is always room for dessert" and so we recommend pancakes with plums

"Stromberger Pflaumen" for the last course. The "Stromberger Pflaume" is a very old, mid- to late-season plum variety. Around 1790, it was brought to the Stromberg region from southern France and Spain by the district clerk and traveller Ludwig Niedieck and named after its new home. Since 2013, it has been registered as a "protected designation of origin".

For those who are attracted to faraway places: The European Commission has published a

cookbook with recipts from all EU countries. The ingredients for these recipes are also registered geographical indications.