Of monks and marks

Taking beer to Munich would be like carrying coals to Newcastle, owls to Athens or rolling cheese to Switzerland. In Bavaria, beer is generally regarded as a staple food and elixir of life. Munich has a long brewing tradition: As early as 1487, Duke Albrecht IV issued the Munich Purity Law, stipulating that only hops, water and malt were permitted as ingredients in Munich beer. Even today, a world-famous beer is brewed from pure natural raw materials according to an old traditional recipe. By the way, the first beer brewers were Augustinian monks. In this article we tell you about this and about the beginnings of the oldest Munich brands.

How the traditional beverage is protected 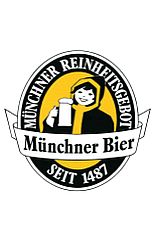 Since 1998, "Münchner Bier" (Munich beer) has been a protected geographical indication (PGI) for beer, which is brewed within the city limits of Munich by the breweries (Augustiner, Hacker-Pschorr, Hofbräu, Löwenbräu, Paulaner and Spaten) which have joined together to form the association "Verein Münchner Brauereien e.V." The term is also protected under trade mark law, for example, as word mark DE 994759 (collective mark of the Verein Münchner Brauereien e.V.).

Only Munich beer is allowed on the Oktoberfest 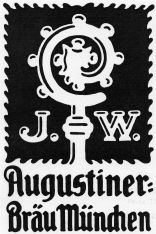 The oldest Munich brewery was founded by Augustinian monks as early as 1328. In 1803, in the course of secularisation, the State took over the monastery and thus the brewery. Only a few years later, in 1829, the brewery became the property of Anton and Therese Wagner and, in 1855, was relocated to its present location on Landsberger Straße. Their son Josef took over the business. The initials "J.W." in the brewery logo stand for him, the crozier of Saint Augustine refers to the brewer monks. Augustiner Oktoberfest beer is served exclusively from the 200-litre wooden barrel called "Hirschen". The beer with the distinctive monk’s logo is also served in countless Munich pubs and several beer gardens. The original brewery building is located in the heart of the pedestrian zone, on Neuhauser Straße.

As early as 28 September 1907, the word mark "AUGUSTINER" (DE 105322) was applied for with respect to goods in class 32 "Beers (strong beers), low-alcohol beers, coloured beers, non-alcoholic beers and non-alcoholic beverages".

Hacker-Pschorr: one of the oldest registered trade marks 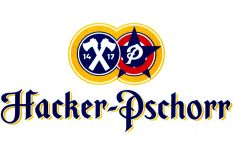 In 1417, a brewery was mentioned for the first time on the site of today’s "Altes Hackerhaus" restaurant. Many carpenters were among the patrons of the inn at that time. This is probably the origin of the two crossed axes or hatchets, which can be seen even on the oldest drawings of the trade mark.

In 1738, Simon Hacker acquired the estate and in 1793, Joseph Pschorr bought it from his father-in-law Peter-Paul Hacker and substantially expanded it. In the 18th century, the couple Joseph Pschorr and Maria Theresia Hacker turned Hacker-Pschorr into the big leading Munich brewery. After their death the inheritance was divided between their sons Georg (Pschorr brewery) and Matthias (Hacker brewery). It was not until 1972 that the Hacker and Pschorr breweries merged again to form the Hacker-Pschorr Bräu AG.

In 1993, construction of the Pschorr-Höfe buildings (including the office complex of the European Patent Office) began on the former site of the Hacker-Pschorr brewhouse near Hackerbrücke. The brewing facilities were combined with those of the Paulaner brewery. Since 1998, the beer has been produced exclusively in the Paulaner brewery facilities. 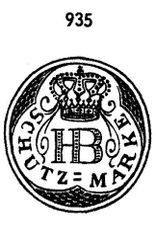 "HB" – two letters, one crown: This is the logo of the Hofbräu brewery Munich. This story began with a culinary challenge more than 400 years ago: Because his court did not like the taste of the beer brewed in Munich, Wilhelm V, Duke of Bavaria, founded the Hofbräuhaus – the birthplace of the brewery and gastronomy – in 1589. Today, the Hofbräuhaus Bavarian State Brewery in Munich is one of two traditional Munich breweries still in Bavarian hands. On 1 August 1896, the trade mark "Münchner Hofbräu" was applied for. The trade mark is still owned by Hofbräuhaus Bavarian State Brewery in Munich. 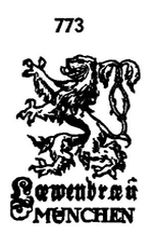 For a long time Löwenbräu was the most widely distributed German beer brand. In 1746, the name Löwenbräu appeared for the first time in the list of beer brews of Munich. It was first brewed in the Löwengrube (lion’s den – old town), then from 1827 on Nymphenburger Straße near Stiglmaierplatz. Extensive brewery facilities were erected on both sides of the street on an area of 79,000 square metres – that is almost eight football pitches. After the takeover by the Spaten brewery and later by the largest beer group in the world, large parts of the brewery site were demolished in 2007. Only a small part of the former brewery still exists today.

The Paulaner friars of the Order of the Minims, founded by Saint Francis of Paola in southern Italy, lived on Neuhauser Strasse in Munich and lent their name to this brewery. Since 1634, the friars brewed beer for their own consumption there. The Paulaner beer, which was allowed to be served to the public on the feast days of the founder of the order, was a bock beer that soon gained local fame. 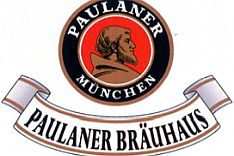 Trade mark DE 30634846, the logo shows Francis of Paola, the founder of the Order of the Minims (Paulaner)

After the monastery was dissolved in 1799, its buildings, located in today's Munich district of Au, were converted into a prison. In 1813, the master brewer Franz Xaver Zacherl acquired the former monastery brewery and continued the bock beer tradition under the name of "Salvator". In 1861, the Salvator-Keller was opened, located on the Nockherberg not far from the brewery.

In 1896, the trade mark "SALVATOR" was registered in the trade mark register of the Kaiserliches Patentamt (Imperial Patent Office) in Berlin (trade mark DE 14743, applied for on 26 January 1895, registered on 14 March 1896). This step was preceded by years of dispute and misuse of the brand, because, for years, numerous other breweries had tried in vain to copy the beer. In the course of this process, the brewery changed its name from "Gebrüder Schmederer Aktienbrauerei" to "Paulaner-Salvator-Brauerei". In 1899, after Zacherl's death, the brewery was taken over by his heirs, Ludwig and Heinrich Schmederer. In 1928, the company merged with the brewery "Gebrüder Thomas Bierbrauerei" in Munich to form the "Paulaner Salvator Thomas Bräu" brewery. In 1994, the company was converted into the "Paulaner Brauerei AG". 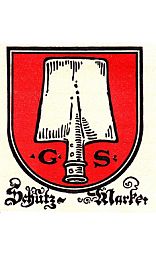 Spaten-Bräu was founded in 1397. Hans Welser, a brewer by trade, ran the “Welser Prew” on Neuhauser Gasse. This can be proved by an entry in the tax book. Afterwards owners changed frequently. In 1622, the Spatt family took over the brewery and lent their name to it. In 1807, the royal master brewer Gabriel Sedlmayr acquired the brewery. In 1867, the Spaten brewery was the largest in Munich and was able to maintain its leading position for a long time. In 1884, graphic artist Otto Hupp designed the Spaten logo, which is still in use today. As early as 24 January 1884, this sign was applied for as a word/figurative mark, registered on 30 October 1894 and is still in force today (trade mark DE 54).

In 1997, the company merged with Löwenbräu. After that, the old Spaten brewery was gradually closed down. Today the brewhouse is a museum. All Spaten beers are produced in the kettles of the former Löwenbräu brewery. On Marsstraße all that is left there are the fermentation tanks and the bottling plant.

The Oktoberfest is not only about beer, pretzels and roast chicken, but also about good music. According to the collective management organisation

"GEMA", the song most frequently played on the Oktoberfest is "Ein Prosit der Gemütlichkeit" (A toast to cheer and good times), which is played several times per hour in each of the 38 beer tents. But that would be another story.